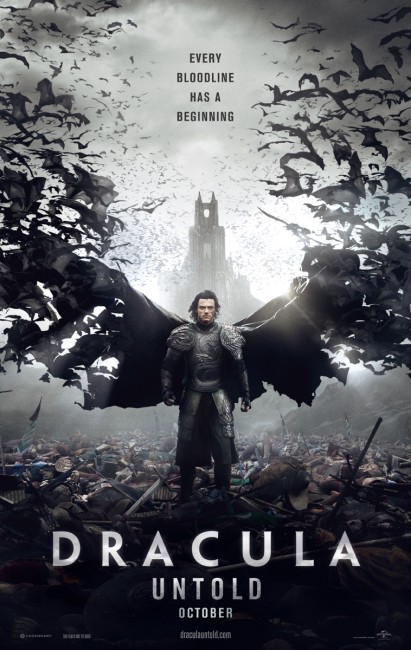 In the 15th Century, Prince Vlad is the ruler of Transylvania and has a reputation for great cruelty. Vlad and his soldiers explore a cave in the mountains, finding the crushed bones of Turkish soldiers but flee at the appearance of a supernatural creature. Back home, Vlad receives an emissary from Mehmed, the Turkish Sultan, who demands that one thousand boys be offered up to be trained for his army of janissaries. Vlad pleads with Mehmed, only to have his own son Ingeras be requested as well. Instead of handing him over, Vlad slaughters the Turkish envoy, knowing that this will mean war. With little army to protect him, Vlad returns to the cave in the mountains and seeks a deal with the vampire creature there. The vampire gives Vlad some of his blood to drink, telling Vlad that he will have his supernatural powers but that Vlad must resist the urge to drink blood for three days otherwise he will become a full vampire. With incredible strength and the ability to transform into a colony of bats, Vlad readily defeats the Turkish soldiers singlehanded. However, this serves to make his own people fearful of his dark power and to bring Mehmed back with an even larger army.

Ever since his appearance in Bram Stoker’s Dracula (1897), Count Dracula has become an icon of horror. First appearing on screen in Nosferatu (1922), Dracula has made hundreds of appearance on film, ranging all the way from adaptations of Stoker to appearances of his wives, sons, daughters, up against other monsters to parody and comedy takes, even pornographic films. Nowadays with the vampire film having been reduced to the mopey romance of the Twilight series, the vampire is starting to seem rather drained of blood. What hope then for another big-budget entry that purports to tell a Dracula origin story?

Bram Stoker took the name Dracula from the historical tyrant Vlad Tepes (1431-77) who is reputed to have slaughtered as many as 100,000 of his own people and enemies (he made little distinction). Vlad’s favourite trick was impaling people with sharpened stakes rammed through their intestines or up their buttocks, letting the weight of their bodies push down until the stake came out the other side, something that purportedly killed slowly and excruciatingly. As the film sort of alludes to, Vlad would leave forests of hundreds, if not thousands, of impaled bodies to strike fear into oncoming armies. There is little indication that Bram Stoker did anything more than come across mention of Vlad Tepes and his honorific Dracula (meaning ‘son of the dragon or devil’) in a book and thought it would make a cool name for the villain he had conceived.

This has not stopped a vast industry popping up around Vlad, Transylvania and areas mentioned by Stoker even though the fiction bears little resemblance to the historical and geographical reality – as the documentary Dracula: The Vampire & the Voivode (2008) points out. On film, there have been some attempts made to marry the Dracula of Stoker and Vlad Tepes of history – the two are named as the same in films like Count Dracula’s Great Love (1972), Dracula (1974) and Bram Stoker’s Dracula (1992). Surprisingly, there has been little attempt to film the story of Vlad Tepes, apart from the tv movie Vlad the Impaler (2000).

The novelty that Dracula Untold offers up is a Dracula origin story – the surprise in the long cinematic history of Dracula is that nobody has tried this idea before. The film specifically names Vlad Tepes as the man who became Count Dracula. This alas is about the point that I began to switch off the film. The Vlad Tepes story is an utterly fascinating one where the stories of his legendary cruelty are far more fearsome than anything any vampire film has managed to come up with. This seems promising but within the first few minutes, it becomes apparent that the historical Vlad the Impaler has been thrown out the window altogether – about the point that the film reiterates the hoary misnomer (created by Stoker) that Vlad Tepes was the ruler of Transylvania as opposed to Wallachia.

Dracula Untold promptly falls into the pitfall of all prequels wherein filmmakers see the need to take a magnificently evil character and give them backstory and explain their motivation. The most egregious example of this has been the Star Wars prequels and you could point to other works like Psycho IV: The Beginning (1990), Friday the 13th (2009), Maleficent (2014) and tv’s Gotham (2014-9). The sole effect this has is to water the character’s effect down and make them sympathetic.

Here Count Dracula travels fairly much the same route as when George Lucas turned Darth Vader into Anakin Skywalker and a pouty teen with emotional issues. After identifying Dracula with Vlad the Impaler, the script is also stuck with having to contort about to make him the hero of the show too. Thus we learn that Vlad the Impaler wasn’t such a bad tyrant after all. Rather than one of the most monstrous rulers in history, we are told that he merely impaled people for the greater good, in effect clever PR to make everyone think he was a monster by slaughtering a few hundred people (which he casually dismisses by saying he could have killed many more than that).

Even if you want to buy into this revisionist take on the historical Vlad the Impaler, it is hard to imagine Luke Evans’ character – who is shown as a decent warrior who fights for his people and is a good family man – as being the same one who hid behind a mask of civility and invades England to seduce and plunder maidens that we get in Stoker and hundreds of vampire movies. The hero who must conduct a devil’s deal in trying to fight the decent fight is just not the same character as a ravening predator. As Empire critic and Dracula expert Kim Newman put it, “If Dracula really started like this, no-one would have bothered to tell any other stories about him.”

In every other respect, Dracula Untold is a disappointment. Irish-born director Gary Shore managed to end up with the reins of a multi-million dollar picture despite having only the single credit of a short film to his name. Disappointingly, Shore treats Dracula Untold more as a big-budget spectacle than he is ever interested in it as a vampire or even a horror film. A near-unrecognisable Charles Dance does not too badly as the crepuscular Master Vampire but everywhere else Gary Shore seems to be aping moves from Peter Jackson and trying to create an action spectacular with massed armies coming together. The image of Luke Evans transforming into a horde of bats is cool when you see it the first time but is soon becomes apparent that this is nearly the only effect that the film has in its arsenal and is repeated at every opportunity.

Luke Evans plays the lead with the handsome intent that is required of him. The major minus I had against the film was the casting of Dominic Cooper as the Sultan. Cooper is an actor who has been on the rise in the last couple of years but whose buzz has disappointingly panned out as nothing more than another actor with handsome looks and a cocky pout who gives the impression that he takes little of the show seriously. Clearly cast here for looks more than creating a nemesis that holds any substance or threat, he causes this side of the show to fall down heavily.

Dracula Untold was planned by Universal as the first in the series of revivals of their Famous Monsters in what became later known as the Dark Universe where they took the idea from Marvel Studios of creating a series of characters that would eventually come together on the screen. With Dracula Untold being a box-office disappointment, Universal next attempted to extend the Dark Universe with The Mummy (2017), although this was a heavy box-office and Universal afterwards abandoned any other Dark Universe films. However, the rights to The Invisible Man were subsequently taken up by Blumhouse and made into The Invisible Man (2020), although that was unrelated to any of the Dark Universe films.

Irish director Gary Shore next went on to make the St Patrick’s Day episode of the horror anthology Holidays (2016).