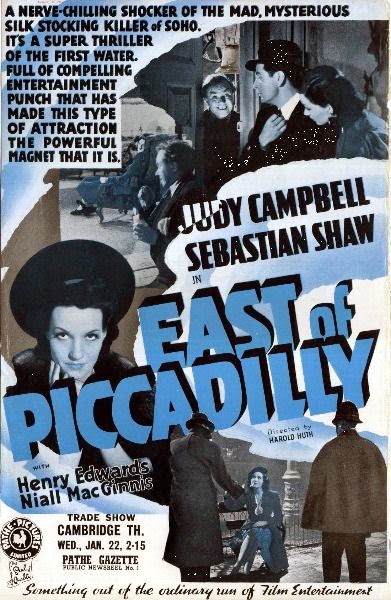 During a book launch party, mystery writer Tamsie Green receives a mysterious phone call asking him to go to a shabby Soho flat. Accompanied by crime reporter Penny Sutton whom he met at the party, Tamsie goes there and they find the body of a girl strangled with one of her own nylons. However, by the time they return with the police, the body has mysteriously disappeared. It later turns up on the steps of a nightclub. Together, Tamsie and Penny investigate the building’s weird inhabitants to try to find the killer.

This obscure film is rather of an oddity. It is slightly reminiscent of Alfred Hitchcock’s Frenzy (1972). It could in fact almost be a precursor to the films of David Lynch – Lynch would have had a field day with the film’s microcosmic house of “peculiar people”. These include a cackling (over)-actor who keeps effigies of his critics behind a curtain, who uses a pair of binoculars indoors when he hears noises banging on his ceiling and takes the opportunity of discovering the bound heroine to turn her into a “captive audience” for a performance; the girl who is a thinly disguised hooker (fairly surprising for the time that East of Piccadilly was made); and the American millionaire who leads a secret life as one of the tenants in the grotty flat.

The excuse the latter offers up in court as to his innocence in the crime defies all credibility – that he grew up in the apartment; that he wanted to bodily transport the entire building over to the USA for nostalgic reasons; that he then employed the mad actor to drive the rest of the tenants out and the price down; that he discovered the body and tried to call his lawyer but rang the wrong number and got hold of Sebastian Shaw by accident, so threw the body out the window where it landed on a truck, which happened to dump it on the steps of the theatre. The scheme whereby the killer is entrapped – by convincing him to re-enact the crime by taunting him with the publicity the convicted wrong man will get – is equally outlandish.

East of Piccadilly gets by on a certain snappiness. The dialogue often has a dry wit about it. The pairing of Judy Campbell and Sebastian Shaw has a frothy bubbliness at which he is too boyish but she works with a liberated likeability.

East of Piccadilly was co-written by J. Lee Thompson, later the director of films such as The Guns of Navarone (1961) and the classic psycho-thriller Cape Fear (1962).