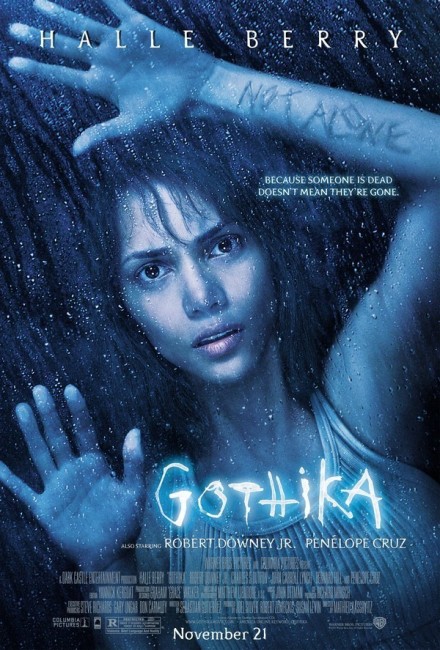 Miranda Grey is a psychiatrist at the Woodward Penitentiary for criminally insane women, where her colleagues regard her as brilliant. While driving home one night, Miranda sees a mystery girl on the road and crashes. She comes around three days later to find that she has been placed in the asylum. She is told that she has murdered her husband, even though she cannot remember doing so. The mystery girl continues to appear to her. Miranda realises that the girl is the ghost of Rachel Parsons, the daughter of the asylum’s director, who is believed to have committed suicide. Led by the ghost, Miranda comes to believe that Rachel was murdered and that the murderer is one of the doctors who work at the asylum. However, everybody else in the hospital regards Miranda’s claims to be seeing a ghost as further evidence of her delusional state.

Gothika was the fourth film from Dark Castle Entertainment, the company formed by producers Joel Silver and Gilbert Adair and director Robert Zemeckis. Dark Castle has so far produced House on Haunted Hill (1999), Thir13een Ghosts (2001), Ghost Ship (2002) and subsequent to this, House of Wax (2005), The Reaping (2007), Return to House on Haunted Hill (2007), The Hills Run Red (2009), Ninja Assassin (2009), Orphan (2009), Splice (2010), The Apparition (2012) and The Factory (2012). Dark Castle’s films have enjoyed a reasonable degree of success, achieving, for example, cinematic rather than the video/dvd releases that most horror films go directly to these days. For all that, the majority of Dark Castle’s films have been mediocre.

House on Haunted Hill was modestly effective, as was the later House of Wax, but Dark Castle’s subsequent two films, Thir13een Ghosts and Ghost Ship, both directed by former Industrial Light and Magic art director Steve Beck, seemed on the verge of producing some atmospheric scares but instead ended up being overwhelmed by special effects. For Gothika, Dark Castle have brought in French actor/director Mathieu Kassovitz, who had previously made the likes of La Haine (1995) and the serial killer thriller The Crimson Rivers (2000) and subsequently went onto the Cyberpunk film Babylon A.D. (2008) and the historical film Rebellion (2011).

Mathieu Kassovitz welcomely dispenses with the visual effects that dominated Steve Beck’s films and concentrates on atmosphere. The shocks that Kassovitz provides are generally competent – the audience that I saw the film with all jumped in the appropriate places. There are a couple of moments where Kassovitz does evoke something genuinely eerie – the scene where Halle Berry asks the invisible ghost that if they are who she suspects they are then could they open her cell door and there is a long moment where we sit in doubt and then the door mysteriously opens; and a strong jolt when Halle Berry bends over and the ghost appears right behind her. Kassovitz draws the third quarter of the film out into some twenty minutes of sustained suspense, where there are perhaps too many continued jolts. Also the focus on constantly making the audience jump gets somewhat in the way of credibility – if the ghost is only trying to get Halle Berry’s help in solving its murder, then why does it make several attempts to kill and/or seriously harm her?

What ultimately makes Gothika fail to work is a weak script. The film seems like a conceptual blend of producer Robert Zemeckis’s own What Lies Beneath (2000) about a wife being contacted by a girl’s ghost that is trying to lead her to solve her murder (the eventual murderers in both films turn out to be the same person too) and with Brain Dead/Paranoia (1990), a B film where psychiatrist Bill Pullman finds he has inexplicably changed places with one of the patients in his own asylum and killed his spouse without remembering doing so. Both of these other films do a much better job of sustaining their respective plots than Gothika does. Here the development of the various suspects and eventual unveiling of the killers’ identities is rudimentary. It is only Mathieu Kassovitz’s occasionally effective shocks that keep the film moving. There are other logic holes – one fails to find it credible that Halle Berry’s co-workers would go from looking up to her as brilliant to people who hide behind stony-faced, unfriendly authority and treat her as seemingly less-than-human in the space of only three days. Nor is the meaning of the title Gothika ever explained anywhere in the film.

On the minus side, Gothika also suffers from Halle Berry. One has yet to be convinced of Halle Berry’s abilities as an actress – she made little impression on the James Bond series in Die Another Day (2002) other than an ability to wear a bikini, while her superstardom status seems to come less out of her Oscar win for Monster’s Ball (2001) than it did the same year’s topless scene in Swordfish (2001). Of course, there was the thorough embarrassment of her next film, the entirely ridiculed Catwoman (2004). She gives a remarkably uninvolving performance in Gothika, where she seems neurotic and closed off. In fact, one suspects that the radiant and lovely Penelope Cruz, who is cast in a throwaway supporting performance as a crazy patient, would have brought far more naturally friendly sparkle to the role and engendered more sympathy than Halle Berry succeeds in doing.