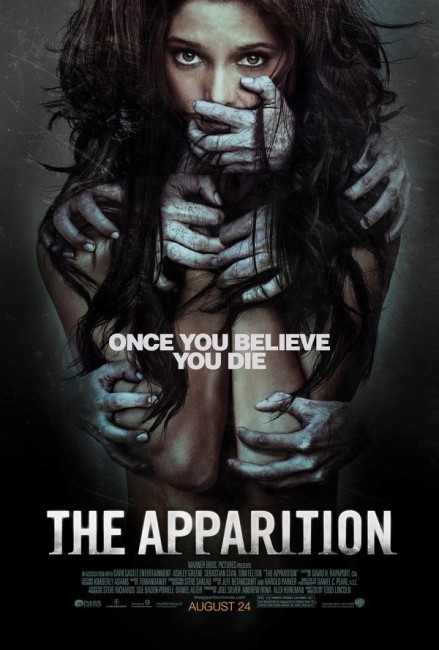 Kelly and her boyfriend Ben move into her mother’s house on a new housing development. Soon after doing so, they encounter increasingly sinister apparitions and phenomena in the house. They puzzle over what it could be. Kelly then discovers a video from an experiment that Ben took part in run by his friend Patrick. They were attempting to recreate a series of experiments in summoning a spirit that were conducted by Charles Reamer back in 1973 and went disastrously wrong. Patrick warns them that they have unleashed an entity that is trying to gain form on this plane.

Something then seemed to happen with Dark Castle around 2008-9. Dark Castle’s original partners Robert Zemeckis and Gilbert Adair disappeared from involvement with only producer Joel Silver remaining. The company appeared to drop interest in horror altogether and their subsequent product has branched out into other genres – thrillers like Whiteout (2009) and Unknown (2011), Guy Ritchie’s gangster film RocknRolla (2008), and mostly action films like Ninja Assassin (2009), The Losers (2010) and Bullet to the Head (2013). The last film that could be said to fall under Dark Castle’s horror mandate would be Vincenzo Natali’s Splice (2010) but that was only a co-production with several other companies and The Apparition was Dark Castle’s first horror film since Orphan three years before. Their only other announced genre effort, the serial killer film The Factory (2012), sat awaiting release since 2010.

The Apparition was a directing and writing debut for Todd Lincoln who had previously made only three short films. Lincoln feels like a novice who has somehow stumbled into control of a big-budget film. Were it not for the casting and professional production finish, The Apparition would surely be an amateur film that Lincoln would be scrabbling to make in his parents’ home with friends corralled into playing characters.

Even though the trailer looked dismal, you wanted the film to work but end up sitting the whole way through The Apparition waiting in vain for Todd Lincoln to make things come together. There are times he almost seems on the verge of hitting the mark and generates something that starts well – as Ashley Greene goes through the darkened house with an ERP scanner; as Sebastian Stan pokes a broom into a patch of rot on the ceiling; the scenes where they enter the Faraday Cage; or return to find the topography of the house has been turned into something resembling an M.C. Escher drawing.

You keep waiting for Lincoln to discover something in these scenes that turns them into scare-your-pants-off moments but he tepidly misses all the beats or fumbles the payoff. A perfect example is a scene where Sebastian Stan is sitting at the computer and Ashley Greene ominously backs out of a room behind him and Lincoln holds back on what she is seeing – this is textbook build-up that alas only turns out to be the underwhelming image of the clothes on hangars having been knotted together. It is a film that feels like it has been made by an enthusiastic novice who wants to scare you but whose craft at doing so never moves beyond earnest but blandly middle-of-the-road emulation of other works in the genre.

The film feels like one that has been composed for a teen target audience – a niche that has become a kiss of death for almost any horror film made since 2000. The casting call seems to have been to recruit lesser acting names from popular franchises – Ashley Greene from the Twilight series, Tom Felton who was Draco Malfoy in the Harry Potter films and Sebastian Stan who previously turned up in Renny Harlin’s awful The Covenant (2006) and just before going to become Bucky in the MCU. The characters are utterly vapid – they lack even surnames – while none of the actors have any depth that goes beyond the makeup department’s determination to highlight their perfect looks. Naturally, the horror element is watered down to a light R-rating.

Most disappointingly, The Apparition is a film that is pitched to its teen demographic with the hope that none of them have seen Poltergeist (1982), Ju-on: The Grudge (2003) and any of a dozen other ghost stories that the film draws on – young people without any grounding in the horror genre are the only ones that could possibly think that anything Todd Lincoln serves up is fresh. A couple of hours after watching the film, I am scratching my head trying to remember a single scare that produced even the mildest frisson.

You reach the end of The Apparition and realise that it is a film made without any real conceptual raison d’etre. The film starts with an experiment but the script’s talk of multiplied brainwave recordings to summon the entity and later of recordings of the experiment being played backwards while jacked into the transformers to exorcise it place the film into nonsense science territory. (Quite what the transformers have to do with everything is a mystery but the film seems to think they do and plays a great deal of footage of them out over the end credits).

The film’s poster comes with the legend “Once you believe you die” and much is made of this in the trailer, which states that the participants in the experiment brought something to life out of their imaginations. This is a weak idea but certainly more original than anything the film offers up. It is also blatantly misleading on the part of the advertising people as nothing to do with this premise turns up anywhere throughout the film. Indeed, the film reaches the end without offering anything but the vaguest explanations about the agency behind the hauntings.