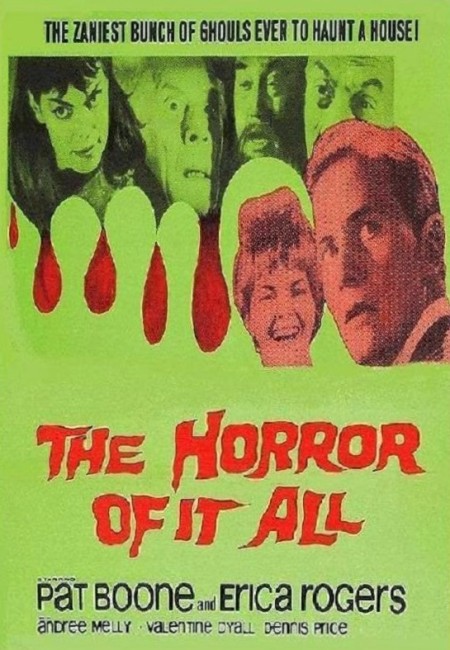 American Jack Robinson travels to his girlfriend Cynthia Marley’s gloomy English family mansion to ask for her hand in marriage. He meets her strange family – her uncle Cornwallis, a hammy actor; her uncle Percival who has just invented electricity, the gramophone and moving pictures; her strange sister Natalia; and her brother Muldoon who has to be kept locked up because he has a habit of attacking people, believing them to be the native head-hunters that tortured him. Someone then starts killing members of the family off and Jack believes this is a scheme to obtain the family inheritance.

The Horror of It All was one of several comedies that came out in the 1960s, spoofing the horror and haunted house genre. Others included William Castle’s remake of The Old Dark House (1963) (the original The Old Dark House (1932) still being the best of these old dark house comedies), Carry On Screaming (1966), The Fearless Vampire Killers (1967) and on tv spoofs of famous monsters such as The Addams Family (1964-6) and The Munsters (1964-6). The Horror of It All was made by Terence Fisher, one of the cornerstones of the Hammer cycle, having made The Curse of Frankenstein (1957), Dracula/The Horror of Dracula (1958) and a number of their other classics. (See below for Terence Fisher’s other genre films).

With The Horror of It All, Terence Fisher temporarily left Hammer for Lippert Pictures, a low-budget company that had made a good many B Westerns in the 1950s and the odd genre entry such as Rocketship X-M (1950), Superman and the Mole-Men (1951), Roger Corman’s first genre film Monster from the Ocean Floor (1954) and Curse of the Fly (1965). As with the science-fiction films he made at Planet Pictures around the same time, Terence Fisher seems uncomfortable outside of the confines of Hammer’s florid period Gothic. Nor is knockabout comedy Fisher’s forte and The Horror of It All is a long way from earlier classic comic variations on the Old Dark House cycle such as The Bat Whispers (1930) and The Cat and the Canary (1939).

The Horror of It All seems, at least in conception, to be trying to come close to the great Grand Guignol comedy Arsenic and Old Lace (1944). There are occasional moments here such as the grandfather inventing the gramophone, moving pictures and electricity just a little too late. At its best, The Horror of It All has an akilter kinkiness; mostly it is just silly freneticism. The film climaxes with a ridiculously contrived double twist ending. Pat Boone sings the title song in the middle of the film.

The Horror of It All is usually an embarrassing black mark that is quickly passed over by those who raised Terence Fisher to cult status in the 1970s. One of the pluses is Andree Melly who has a wonderfully spooky and unnerving intensity – it is a shame she never graced the genre again apart from an earlier minor part in The Brides of Dracula (1960), she could have been another Barbara Steele.