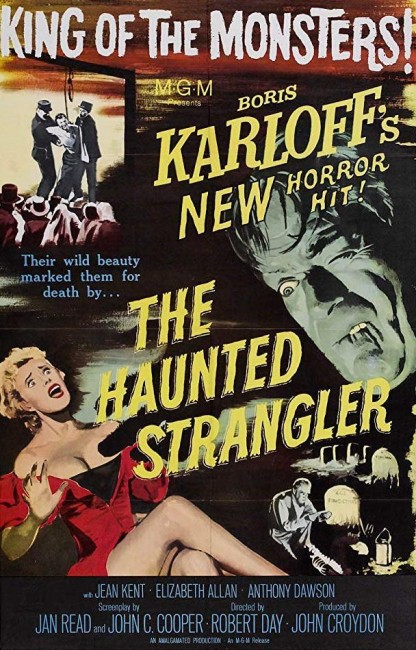 aka Grip of the Strangler

London, 1880. Writer James Rankin is determined to conduct an investigation into Edward Styles, the one-armed Haymarket Strangler who was executed 20 years earlier. During his investigation, Rankin comes to believe that the real killer was a Dr Tennant. Determined to get to the truth, Rankin exhumes Styles’ grave and finds Tennant’s knife buried there. However, picking up the knife causes Rankin’s face to twist and contort and his arm to become crooked. He runs off and starts killing but each time wakes unable to remember anything. Rankin’s wife reveals the truth to him – that Rankin is actually Tennant, how she brought him back from the hospital 20 years ago and raised him as the person he is and that he has blanked out all memory of who he used to be.

Robert Day was a minor director in British cinema. Day emerged onto the genre scene with two horror films under producer John Croydon at Amalgamated Productions both shot back-to-back and starring Boris Karloff, first with the medical horror Corridors of Blood (shot in 1958, but not released until 1962) and The Haunted Strangler/Grip of the Strangler here. Day hovered around the British horror scene of the era briefly, making the science-fiction film First Man Into Space (1959) and attaining some recognition with the Hammer film She (1965). Day went onto make several Tarzan films – Tarzan the Magnificent (1960), Tarzan’s Three Challenges (1963), Tarzan and the Valley of Gold (1966), Tarzan and the Great River (1968) and Tarzan and the Jungle Boy (1968) – and then disappeared into US tv up until his retirement in the 1990s where the only notable genre work he made was the occult tv movie The Initiation of Sarah (1978).

There are a number of similarities between Corridors of Blood and The Haunted Strangler. Both star Boris Karloff for one (and from the looks of it may have been shot using the same sets). Moreover, the plots have a number of parallels – in both films, Boris Karloff is a 19th Century researcher who becomes obsessed with his field of enquiry and in effect becomes a split personality (a drug-addicted doctor in Corridors of Blood, an actual split personality here). Both stories are essentially Dr Jekyll and Mr Hyde tales. Both also make effective contrast between the good Karloff living an upright and moral upper-class lifestyle and his being drawn into a vulgar underworld as represented by seedy inns and dancehalls. The dancehall sequences are directed with an undeniable bawdiness – it is amusing to watch The Haunted Strangler today where one of the dancehall girls has the unfortunate name of Martha Stewart.

Corridors of Blood gave the appearance of being a film that started out as an earnest and serious medical drama but was contorted into a horror film by its nearness to the Anglo-horror cycle that was started by Hammer Studios in 1957-8. The Haunted Strangler is much more of an overt horror film. Clearly, the scriptwriters were thinking of the Jack the Ripper killings and came up with a story about a split personality and what for a time looks like a possession story, all wound into a copy of the Ripper killings.

Alas, once the film’s major twist becomes known, The Haunted Strangler collapses into almost complete risibility. The psychological behaviour that the film asks us to believe is preposterous – that Rankin’s wife (Elizabeth Allen) happened to find Dr Tennant while doing charity work at a hospital twenty years earlier, took him home and somehow convinced him to adopt an entirely new identity as Rankin and completely erase all memory of himself as the psychopathic Tennant, and to not only develop total amnesia but to also somehow straighten out his crooked arm and twisted face.

In some ways you could almost look upon The Haunted Strangler as a horror movie precursor to A Scanner Darkly (2006) – although rather than Philip K. Dick’s weird games of split personality identity bending, the film here emerges as clumsy and contrived psychology. Psychology was obviously not one of Robert Day’s strengths as Corridors of Blood also contains the same melodramatically contrived portrait of drug addiction.

The other risible aspect of The Haunted Strangler is Boris Karloff’s theatrical and overwrought performance as the Tennant half of the personality. The performance that Karloff gives, where he seems to twist one side of his face up into an exaggerated snarl and put his arm into a claw, cannot help but seem absurd. While the film starts out promisingly and Robert Day gives it a sober historical realism that was very different from the Hammer films of the period, the last half of the film collapses into a silliness born by its fundamentally implausible psychology and Boris Karloff’s hammy performance.