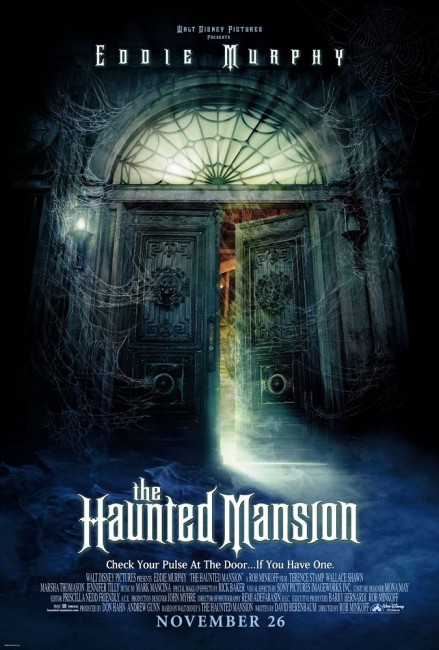 Louisiana realtor Jim Evers finally makes an effort to get away from work to spend some time with his wife and children. His wife/business partner Sara receives a call, asking them to come and look at the Gracey Mansion. Jim decides to briefly stop in on their way out of town. They find a large decrepit old building and are invited to dinner by the butler Ramsley where they meet the master of the house Edward Gracey. A rainstorm forces them to stay the night. They explore the mansion and realise that is haunted and that both Ramsley and Gracey are ghosts. Guided by a crystal ball, Jim begins a search for the key that will allow them to escape. Meanwhile, Gracey tries to woo Sara, believing that she is the reincarnation of his late love Elizabeth.

From the 1990s onwards, the Disney corporation under CEO Michael Eisner began a massive and soulless process of commercialising every single facet of their empire – from Disney merchandising stores in every major city to live-action remakes of their animated movies, remakes of their live-action hits of the 1960s and 70s, and a relentless series of cheaply-made sequels to all their animated films. The Haunted Mansion is the third in what is one of the most bizarre attempts to milk everything possible from the Disney empire – films based on their theme park attractions. Disney’s previous theme park-adapted films had included The Country Bears (2002) and the massively successful Pirates of the Caribbean: Curse of the Black Pearl (2003) and the subsequent Tomorrowland (2015) and Jungle Cruise (2021).

The Haunted Mansion is directed by Rob Minkoff, a former Disney animator who co-directed The Lion King (1994) and then branched out as a live-action director with the popular children’s favourites Stuart Little (1999) and Stuart Little 2 (2002) and the subsequent The Forbidden Kingdom (2008) before returning to animation with and Mr. Peabody & Sherman (2014).

Alas, the idea of a Disney haunted house film proves fairly much anathema to anyone who is a horror fan. The film offers up a number of ghosts, some revived corpses and a few jolts on the soundtrack but nothing that could be called scary, certainly nothing that is even remotely threatening to the formula of Disney family fare. The scares on offer are down about the level of Scooby Doo, Where Are You? (1969-72).

The film only ends up as a big haunted house comedy – a slickly produced conveyor belt vehicle with numerous visual effects, an impressively designed mansion and a good deal of easy humour (but surprisingly little that is funny). Eddie Murphy goes through his usual routine but either he is sleepwalking in the part or else the script failed to provide him with any decent material or both, and it is a by-the-numbers performance for him.

The script is also entirely lightweight. It has clearly set out to incorporate the major elements from the theme park ride of the same name – which originally opened in Disneyland in 1969 – the antebellum mansion, the ghost-filled ballroom and dinnertable, the attic, the ghost graveyard, the busts that turn and look as people pass, the phantom carriage that is invaded by hitchhiking ghosts, the clock with thirteen hours, Madame Leota in the glass ball (who even gets to read out the ride’s final warning after the end credits have finished rolling), the barbershop quartet of singing busts.

The major problem with the film is that the ride is only a series of spooky tableaux that was never designed with a coherent story in mind. The film has valiantly tried to throw all of this together with a plot that uses the ghost bride that appears in the ride as its basis. However, the very faithfulness to the various elements of the ride makes for an ungainly story. The film provides us with an explanation as to why the ghostly lord of the manor, his bride and butler are still lurking around – but gives us no reason as to why the whole area is haunted by other ghosts, a mausoleum of zombies, living busts and a head in a crystal ball. Indeed, it is amusing at the end when the owner of the house finally goes to Heaven and so too do his servants, where the implication left is that class status extends beyond the mortal coil and retainers are forced to stay around tending their master into eternity.

Guillermo Del Toro has announced intentions to produce another version of The Haunted Mansion.

(Nominee for Best Production Design at this site’s Best of 2003 Awards).