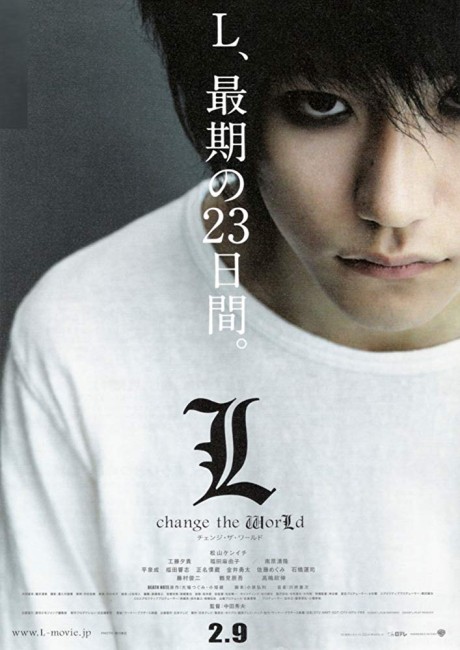 L decides that the only way he can deal with the notebook of the death god Shin is to write his own name in it and tell how he dies peacefully in twenty-one days time. Meanwhile, Matoba, an international terrorist posing as part of an environmental group, has obtained a deadly manufactured virus but needs its antidote before releasing it. The virus’s creator Dr Nikaido injects himself with the virus rather than let Matoda obtain the antidote. Kimiko Kujo, Nikaido’s traitorous assistant, realises that Nikaido has left clues to the antidote with his daughter Maki. Maki seeks refuge with L. L, along with a young boy who is the sole uninfected survivor of an outbreak of the virus in a Thai village that killed L’s compatriot F, goes on the run from Matoda’s team to protect Maki.

L: Change the World feels like an unnecessary film. The Death Note saga was perfectly self-contained with the other two films and L feels a superfluous pendant to the saga. There is no feeling that it is telling any untold aspect of the Death Note story that burned to be told. There is an effort made to wind in some of the characters from the other films – the tv presenter Misa, L’s servant Watari and Agent Naomi Misora – but most of these appearances feel contrived. There is also the return of the death god Ryuk at the start as L writes his name in the notebook but this comes solely so that L: Change the World can squeeze in connection and make itself into a Death Note film. The crucial measure is that take out these scenes, give the character of L a different name and as a story L: Change the World could easily stand on its own without any connection to the Death Note series.

Unfortunately, L: Change the World fails to provide an interesting enough story to compete with the Death Note saga. With the Death Note saga we had a story that delighted in pitting the characters of Light Yagami and L against one another and in the plotting contortions that came as each sought to outwit the other; on the other hand, L: Change the World simply turns L into a secret agent and throws up an old hat biowarfare theft plot. We go from a delightful battle of wits to a routine action/thriller plot – and one where L spends most of the film now accompanied by two cute kids. As a story on its own without the Death Note connection, L: Change the World would be instantly forgettable. Hideo Nakata, whose name one tends to think was highly overrated on the back of Ring, fails to invest the film with anything substantial.

Kenichi Matsuyama gives the same weird performance that he did in the Death Note films, again walking with oddly ungainly posture, picking up things in his fingertips and eating bizarre food combinations at every opportunity. (You cannot help but wonder with the diet he has how L manages to maintain such a slim frame). Certainly, without Kenichi Matsumaya’s presence to fill it, L: Change the World would be nothing. Unfortunately, we have seen the weird ungainly L before in the Death Note films and all that Hideo Nakata does is to overstress the familiar quirks to the point of heavy-handed repetition. This time Kenichi Matsumaya gets some of his dialogue in English, although gives the impression that he has only learned it phonetically.

The disappointment of L: Change the World is that it fails to come up with a film that is worthy of an original character like L. One good aspect about the film is the villain’s main enforcer played by Youki Kudoh, which the beautiful Kudoh plays with an exquisitely glacial coldness such that she comes to overshadow the main villain himself.