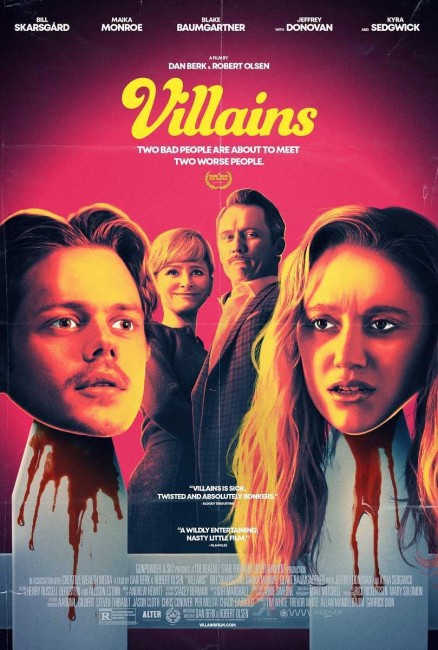 Mickey and Jules conduct an armed robbery of a gas station and get away with the proceeds only for their car to run out of fuel not far down the road. They head to a nearby house and, finding nobody home, break in. Searching the house, they are shocked to find a young girl Sweetiepie chained up in the basement. Jules is determined that they rescue Sweetiepie and take her with them. Searching for a way to cut the chains, they are startled as the homeowners, husband and wife George and Gloria, return. Mickey pulls his gun and insists they free Sweetiepie – only for Sweetiepie to bite Mickey’s hand and allow George to overcome him. Mickey comes around to find they are prisoners in the house. A series of games between they and George and Gloria ensue as they seek to turn the tables and find a means of escape.

Villains was the third film from the writing/directing partnership of Dan Berk and Robert Olsen. The two had previously written-directed the thriller Body (2015) and the Glass Eye Pix sequel Stake Land II (2016), as well as written the script for Mike Mendez’s fun body-hopping effort Don’t Kill It (2016).

Villains starts out with an appealingly quirky sense of humour. Bill Skarsgård and Maika Monroe are two characters that almost any other film would ridicule for their lack of intelligence. Instead, Berk and Olsen have an endearing likeability for them and both Skarsgård and Monroe give performances that make them two of the most amiable losers one is likely to come across.

It becomes apparent soon into the film that Villains follows a path charted by other films such as The People Under the Stairs (1991), The Collector (2009), Don’t Breathe (2016), Bad Samaritan (2018), Monster Party (2018) and The Owners (2020) that feature plots in which house burglars enter homes only to come across something disturbed – the activities of serial killers and/or people being held prisoner. (See Home Invasion Thrillers).

Much of the show is stolen by the veteran names in the cast. Jeffrey Donovan owns much of the early parts of the show with a serpentine charm, particularly in a scene using his salesman skills to outsmart a gun-wielding Bill Skarsgård. Kyra Sedgwick emerges to the fore in a demented scene where she comes onto and does a partial striptease for Bill Skarsgård as he is tied to a bed – with her at the age of 54, it becomes the sort of outlandish scene that you could imagine in a film like What Ever Happened to Baby Jane? (1962).

The fun of the film comes in the whiplash twists and turns the plot keeps taking – how we go from Bill Skarsgård demanding at gunpoint that Blake Baumgartner be freed to her biting his hand and they overcome and imprisoned; the escape from the cellar (via a laundry chute) that ends up in chaos at the front door; the successive attempts to escape that all go awry in the funniest ways. Berk and Olsen’s sense-of-humour is appealingly offbeat, including scenes of Bill Skarsgård and Maika Monroe chained up in the cellar nonchalantly discussing business ventures they could take up when they get free or his attempts to pick the lock using her tongue piercing.