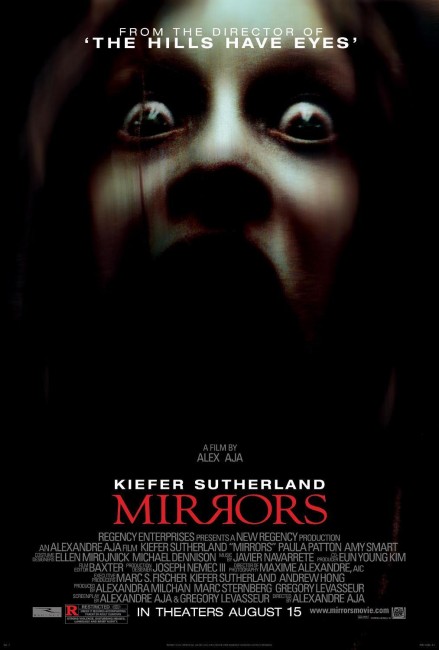 Ben Carson is a detective who has become an emotional wreck after being suspended from the NYPD over a shooting incident. Attempting to put his life back together, he takes a job as a security guard at the ruins of the Mayflower department store, which burned down in the 1950s. Once on duty, Ben starts to see things moving in the building’s mirrors. He can see ghosts of the dead and experiences hallucinations of being burned alive. Looking into the store’s past, Ben believes that the mirrors are calling to him to find someone named Esseker. At the same time, he realises that malevolent forces can reach out through any mirror or reflective surface and are attempting to kill his family.

With the success in international release of his gore-drenched film High Tension (2003), French director Alexandre Aja leapt to the forefront of the 00s horror genre. This was consolidated by Aja’s next film, the remake of The Hills Have Eyes (2006), where audiences responded favourably to Aja’s brutal reworking of the original. Subsequent, Aja went on to conduct a remake of another 1970s horror film with Piranha (2010), Horns (2013) wherein Daniel Radcliffe develops a set of devil horns, the non-genre thriller The 9th Life of Louis Drax (2016) and the killer alligator film Crawl (2019). Elsewhere Aja has produced/written the imprisonment thriller P2 (2007), the remake of Maniac (2012), The Pyramid (2014) and produced The Other Side of the Door (2016) and 47 Meters Down (2017).

Alexandre Aja’s other films are centred around gore-drenched horrors of a physical variety – split personality psychos, backwoods brutality, mutants, killer prehistoric piranha – however, Mirrors sees Aja taking up a different type of horror – supernatural horror. To his credit, Aja produces a number of occasionally eerie effects – reflections doing things contrary to their owners, people trapped inside mirrors or puddles of water, hands pushing out of mirrors. However, there is nothing remarkable to any of it.

The most memorable set-piece in the film is when Amy Smart takes a bath while the reflection behind her in the bathroom mirror tears its jaw off, only for this to then be reflected in gory reality as she lies in the bath. It is an effective sequence but seems more about a novelty gore effect than it adds anything to the film.

Alexandre Aja’s problem seems to be that he is more interested in physical horror than in the eerie and supernatural. The creation of any mood in the film is far too quickly overtaken by gore effects, false amplified jumps on the soundtrack or the addition of obvious CGI scenes where Kiefer Sutherland hallucinates that he is being burned alive. The climax in particular is a heavy disappointment consisting only of explosions, fights and a routine demon possessed figure that seems to do nothing more than roar. What one suspects would have made Mirrors work is the presence of an Asian director far more used to the eerily supernatural and uncanny – someone like Takashi Shimizu, Kiyoshi Kurosawa or the Pang Brothers.

While Alexandre Aja’s direction sits just between finding some effect and fumbling it, it must also be said that the story he is attempting to inflate is second rate. The backstory to events about crimes of the past needing to be redressed in the present/the accidental unleashing of a great evil comes by the book the entire way. Kiefer Sutherland at least animates the old hat material about the hero becoming obsessed with a manifestation of the supernatural and being thought crazy by all the others around him with his best hangdog expressions.

However, no depth or flesh are put on any of the characters – they are standard casting call for every dreary conveyor belt horror film of the 00s, while the person who gives the most lively performance, Amy Smart as Kiefer Sutherland’s sister, is bumped off without getting the opportunity to do anything. Alexandre Aja and Gregory Levasseur give the material nothing interesting, other than perhaps a modestly effective twist ending.

Mirrors is a gimmick horror film – the entire film has been premised around the old horror film device of someone looking into a mirror and their reflection not following suit. Take this sole gimmick out of Mirrors and all that would be left would be a direct-to-dvd ghost story of the most routine order. The basic premise of the sinister mirrors was done far more eerily in Poltergeist III (1988).