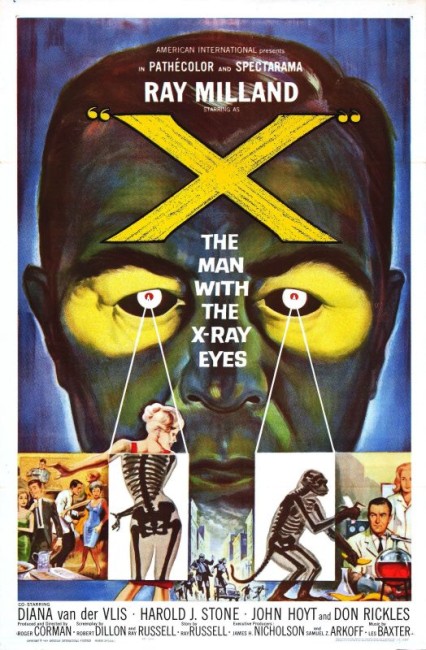 aka The Man With X-Ray Eyes; X

Dr James Xavier experiments to perfect a serum that will expand the range of the spectrum that the human eye can see. In an effort to prove himself before the grants committee, Xavier uses the serum on himself, He soon finds that he has x-ray vision. He is forced to flee when he accidentally kills a man. On the run, he hides by employing his talents as a fairground mystic. Under the tutelage of an exploitative barker, he poses as a healer, before trying to break the bank on the Las Vegas tables.

Roger Corman works with a script from Ray Russell, the horror writer who wrote Mr. Sardonicus (1961) and Corman’s Premature Burial (1962). X – The Man with X-Ray Eyes falls fairly and squarely into the type of mad scientist film that was all the fad during the 1930s and 40s. In fact, the script that Ray Russell delivers is one of the most remarkably tortured and personalised of all mad scientist films. Mad scientist films invariably fall into the model represented by the myth of Icarus – the seeker after knowledge who flew too close to the sun and fell to his doom – in that their quests after forbidden knowledge unleash catastrophe and disaster.

No mad scientist film seems to echo this myth as consciously as X – The Man with X-Ray Eyes. No mad scientist film ever had the grandiosity of having a character see into the very centre of the universe – and report a giant eye looking back at him, something with Corman’s customary penny-pinching the film only deigns to describe rather than depict. And there is the wonderfully overwrought, incredibly resonant climax with Ray Milland running into a revivalist preacher’s tent and taking the utterance “If thine eye offend thee, pluck it out” literally. No mad scientist film ever seemed to operate on such a direct and conscious level of Old Testament thunderousness.

Roger Corman has of course made X – The Man with X-Ray Eyes on the cheap. It does have the benefit of being in colour, which most of his pre-Poe films did not. The x-ray effects are economically conducted with the use of coloured lighting effects and the filming of construction sites in order to represent skeletal buildings. There is one scene at a party where Ray Milland sees the partygoers naked, which are all hilariously shown below the butt or dancing with their back turned to the camera.

Nevertheless, Roger Corman has a directorial grasp that reaches out well beyond the confines of a B-budget film – there is that moment where Ray Milland wakes up from the initial injection of droplets and we look up at people from his point of view before Corman pulls away to show that Milland is wearing bandages over his eyes. Ray Russell’s dialogue is often memorable – the cruise through the city with Ray Milland describing what he sees: “a city that is newborn, hanging as metal skeletons, signs without support.”

A remake has been discussed several times in recent years – this is one film that would benefit enormously from the full CGI treatment.