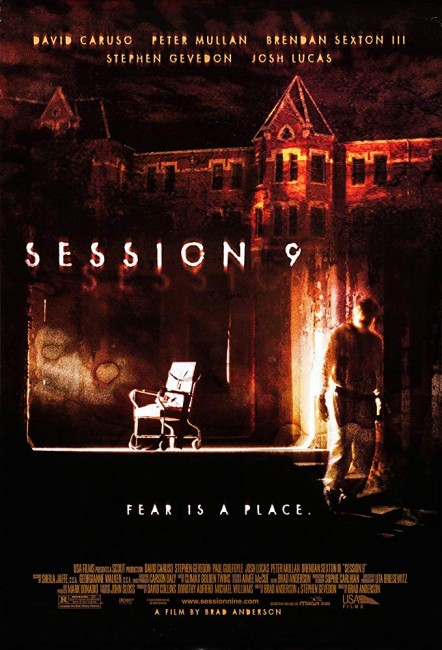 Gordon Fleming, the owner of a faltering hazardous waste materials disposal service, takes a contract to dispose of the asbestos at the abandoned Danvers State Hospital psychiatric institution. In order to obtain the contract, he has agreed to complete the job within a week, although this is a timetable that places great pressure on his team. As he and his four-man team rush to complete the job, tensions within the group come to the surface, including Gordon’s strained relationship with his wife. One of the group, former law student Mike, becomes fascinated with listening to nine psychotherapy session tapes of a woman with multiple personality disorder that he finds as he searches through the asylum’s archives. At the same time, there also appears to be someone or something lurking in the building.

Session 9 is a horror film from indie director Brad Anderson. Anderson made several not particularly well known films – most intriguing sounding of which is the short Frankenstein’s Planet of Monsters (1995) – and then debuted with the slacker comedy The Darian Gap (1996). He is best known for the quirky romantic comedy Next Stop Wonderland (1998). In recent years, Anderson has moved into genre territory with the fine romantic time travel film Happy Accidents (2000), Session 9 and the subsequent arthouse hit of The Machinist (2004), which was followed by the non-genre thriller Transsiberian (2008), the Last People on Earth drama Vanishing on 7th Street (2010), the 911 call thriller The Call (2013), a further asylum horror Eliza Graves/Stonehearst Asylum (2014), the international thriller Beirut (2018) and the medical horror Fractured (2019).

Session 9 is reflective of the new aesthetic that seems to have settled on the horror film after The Blair Witch Project (1999) (which in turn was influenced more than a little by Lars von Trier, Thomas Vinterberg and their Dogma school of minimalist purity). The film uses naturalistic, sometimes handheld, camerawork rather than dramatically staged set-ups; is shot on high-definition video rather than film; uses everyday surroundings – an actual abandoned asylum (the Danvers State Hospital in Massachusetts) rather than any constructed sets; and is focused on actors reacting to the environment rather than performing around camera set-ups.

Both Session 9 and The Blair Witch Project strip the horror film away from conventions and clichés – they are more realistic character dramas. Session 9 is particularly well written in this regard – there are no teenagers/early twentysomething victims, no gratuitously contrived stalking scenes, no beautiful women being voyeuristically watched; rather the characters are just ordinary working stiffs doing a dirty job. The character tensions are remarkably well drawn and some of the soliloquies granted the characters haunting.

Amidst all of this, Brad Anderson generates an intensely haunted atmosphere – Josh Lucas’s venture in to retrieve the coins at night is eerie, all the more so for being directed without any of the easy cues of traditional slasher films. So too is his spooky reappearance later in the piece, a scene not unreminiscent of the climactic wall scene in The Blair Witch Project.

The story of a blue collar cleanup crew entering the bowels of an abandoned building and encountering something there was first done in the Stephen King short story Graveyard Shift (1970), not very well filmed as Graveyard Shift (1990). The title refers to a series of psychotherapy session tapes being played throughout, which hint at all manner of things going on. For a great part of the film though – nearly three-quarters of the running time – you are not even sure what type of film Session 9 is – a haunted house story, a psycho-thriller, or even if there is anything at all lurking in the building. It is all brooding tension that seems to be building to a big payoff.

When it emerges, the payoff is interesting [SPOILER ALERT] where it becomes a twist ending that the film has been borrowed from Fight Club (1999). It is a unique twist, although one that is not clearly spelt out – clues are littered throughout that only become more apparent with a second viewing of the film – and the hanging ambiguity left audiences and some critics confused. Nevertheless, Brad Anderson and co-writer Steve Gevedon (who plays the part of the law student listening to the tapes) make it work with a number of extremely dextrous and startling twists.