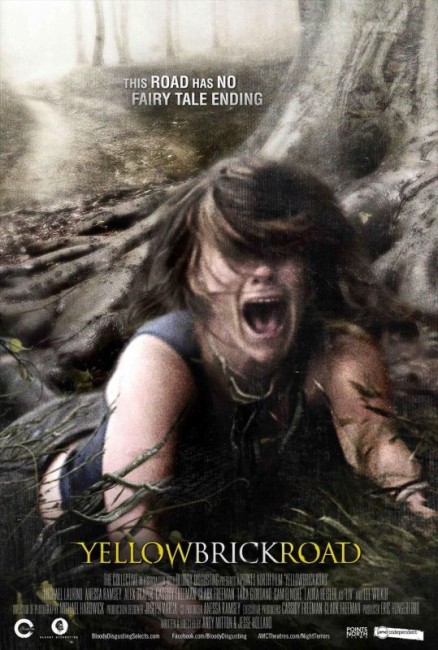 Teddy Barnes is obsessed with the mystery of what happened to the town of Friar, North Hampshire in 1940. All but one of the residents followed a trail into the woods. Some were later found dead but the rest disappeared. Teddy finally gets to see official documents about the incident that have previously been concealed. With this information, he and his university colleague Walter gather a team and mount an expedition to follow the trail. They are disappointed when the coordinates for the start of the trail only lead to a cinema in Friar. Teddy meets the popcorn girl Liv who offers to show them the real trail, nicknamed the Yellow Brick Road, saying that her grandfather was the sole survivor. As they set out along the Yellow Brick Road, strange things begin to happen – they hear mysterious music playing through the trees, while the compass readings go awry and the map measurements shift and change unpredictably. As they continue, the party’s sanity begins to fray, eventually to the point of madness and murder.

YellowBrickRoad is a fascinating independently made effort from a group of unknowns from North Hampshire that received modest play at a number of fantastic festivals around the world. It was a first film for both writers and directors Jesse Holland and Andy Mitton. The film is cast with an group of unknown actors – not non-professionals, as many of them have a number of credits in television and film bit parts, but names with little recognition factor.

The title alone sets up undeniable associations to The Wizard of Oz (1939) that leaves you wondering where exactly what the film is going to go with it. One’s initial impression was that YellowBrickRoad would be some kind of contemporary modernisation of The Wizard of Oz perhaps along the lines of Oz (1976) or Tin Man (2007). However, any hopes of this are immediately dashed when the film opens on a series of sober and disturbing still images from the 1940s, along with overlaid title cards and an audio recording that tells about the mysterious disappearance of the people of Friar. In these scenes, YellowBrickRoad seems to be getting about as far from The Wizard of Oz as it is possible to get.

What we get seems to fall more into the category of a film that uses The Wizard of Oz as a series of allusions such as Zardoz (1974) or David Lynch’s Wild at Heart (1990). There are a number of Wizard of Oz references throughout – lines about going to see The Wizard or wanting to be able to go home again; while the central image in both is of following a path that leads through the landscape. There is also a decidedly WTF image at one point of one character’s mutilated body left hanging in a grim analogue of The Scarecrow.

The film that YellowBrickRoad appears to have drawn inspiration from far more so than The Wizard of Oz is The Blair Witch Project (1999) and its story of a group becoming lost on an expedition into the woods and similarly being driven crazy by mysterious supernatural events from an unseen source. As eventually becomes apparent, YellowBrickRoad falls into the same territory as George Romero’s The Crazies (1973) and its story of a group of people slowly being torn apart by something that warps their sanity. Around the time that YellowBrickRoad was made there were a number of other films dealing with outbreaks of mass insanity with the likes of The Signal (2007) – indeed, actress Anessa Ramsey who plays the hero’s wife here was the lead in that film – Pontypool (2008), Dead Air (2009), Nine Miles Down (2009), Salvage (2009) and The Crazies (2010) remake. Maybe you could also add to the mix of inspirations a little of Stalker (1979) about a group on a journey into a mysterious zone where the normal rules of reality and geographic configuration no longer apply.

As YellowBrickRoad went on, I began to get into what directors Jesse Holland and Andy Mitton were trying to do. They maintain an atmosphere of the constantly otherworldly – of mysterious music playing in the background, later becoming deafening to the party; of compass coordinates and map readings continuously being off. There are times that this becomes entirely startling – like where Clark Freeman and Cassidy Freeman have an argument over her disliking him wearing a hat he has found and his upset that she has scratched the lens of their cartographic measuring device. Before we know it, this turns into them fighting, he battering her in the background and then even (in a gore effect of so-so conviction) tearing her leg off. The subsequent scene where the rest of the group try to convince Clark Freeman to surrender from where he is hiding also has an admirably well-sustained level of psychological tension.

At the centre of the film are a series of hauntingly melancholic character studies as we watch the party succumb to their individual insanities. This becomes particularly effective during the last twenty minutes. There is the scene where the character of Jill (Tara Giordano) tags along behind the rest of the group, apologetic at earning their disapprobation over eating the last of the food supplies, and then in wide angle we see her suddenly turn and step off the cliff to her death. The casualness of the shot is astonishing in its effect.

There is also the scene where Michael Laurino makes a long apology to wife Anessa Ramsey over the radio. Just as she sits down listening to this, there comes the low, threateningly quiet voice of Clark Freeman: “I should let you know I’m in the cave. Here behind you … Are you going to run?” “I don’t want to run from you.” “Are you going to kill me? Here? Now?” followed by a pause and a cool calm “Yes.” “Does it have to be so much pain?” “Yes.” There is also the scene where Sam Elmore ominously tells Laura Heisler: “It’s happening to me. What happened to Daryl … I’m going to do something to you. That’s not speakable.” “Like what?” “I’ve been thinking about it for miles. All the things I’m going to do.”

[PLOT SPOILERS] One of the more fascinating things about YellowBrickRoad is that there is no explanation ever offered for what is going on in the woods. Not unlike The Blair Witch Project either. I liked the film for its going out on a limb and leaving everything entirely mysterious, very similar to The Picnic at Hanging Rock (1975) in many ways. There is a vaguely unsatisfying end where Michael Laurino appears to make it to the end of the road and enters into the same cinema where the journey began to be greeted by a sinisterly threatening usher (Lee Wilkof), which undeniably reminds of Stanley Kubrick’s The Shining (1980).

YellowBrickRoad is a strong and interestingly original debut film. I am certainly more than interested to see what Jesse Holl and Andy Mitton are capable of doing next. This next came about with the ghost story We Go On (2016). Andy Mitton subsequently went on on his own to make The Witch in the Window (2018) and The Harbinger (2022), while Jesse Holland made The Crooked Man (2016).