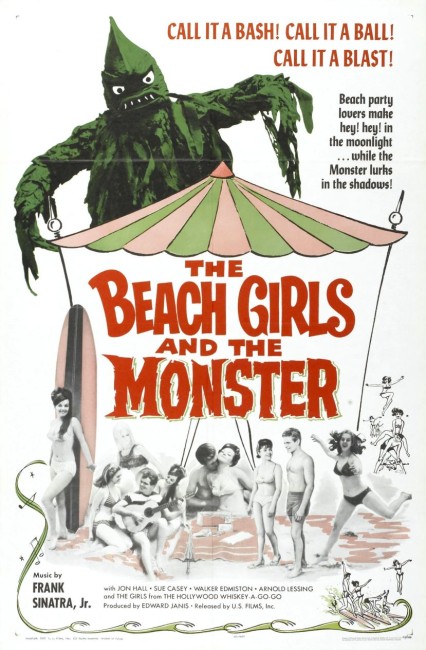 aka The Beach Girls and the Monster; Surf Terror

Much to the displeasure of his father, noted oceanographer Dr Otto Lindsay, Richard Lindsay has given up his career in science in favour of hanging out and having fun with his surfer friends on the Santa Monica beachfront near where he lives. The teenagers’ idyll is now upset as a monster starts killing them.

Monster from the Surf/Beach Girls and the Monster was one of a spate of teen-oriented monster movies made in the late 1950s/early 60s. This fad was begun with I Was a Teenage Werewolf (1957) and continued through the likes of I Was a Teenage Frankenstein (1957), Invasion of the Saucer Men (1957), The Blob (1958), Teenagers from Outer Space (1958) and Teenage Monster (1960). All of these tapped into a burgeoning desire of the rock’n’roll generation to break away from what it saw as the staidness of controlling parents and/or authorities that failed to treat them with respect. Into the 1960s, this genre briefly crossbred with the new fad for surfer/beach party movies in a handful of entries such as The Horror of Party Beach (1964), Pajama Party (1964), How to Stuff a Wild Bikini (1965), this and The Ghost in the Invisible Bikini (1966).

Monster from the Surf is a Z movie. It lacks the notoriety of the likes of Robot Monster (1953), Attack of the 50 Foot Woman (1958) and Plan 9 from Outer Space (1959) but in all essential qualities it stands up there alongside. Bizarrely enough, Monster from the Surf was directed by and stars Jon Hall, a former matinee idol of the 1940s in films like The Hurricane (1937), Kit Carson (1940), Arabian Nights (1942), Ali Baba and the Forty Thieves (1942), Cobra Woman (1944) and various Invisible Man sequels. (Monster from the Surf was Jon Hall’s one and only directorial outing and, indeed, the last film he appeared in before his death in 1979).

Jon Hall’s direction is laughably flat – the film is padded with surfing footage, with some scenes being repeated several times over. The surfer kids are ridiculously cleancut and seem to spend all their time playing guitar on the beach while the girls tirelessly boogie their bikinied butts. Hall throws in inane comedy relief gags with snakes-in-the-box, lion hand puppets and sand placed in hotdogs. Between them, Monster from the Surf and The Horror from Party Beach feature two of the most absurd of all screen monsters. The one here with its conically shaped head, ping-pong eyeballs and its arms-raised shuffle towards its victims will leave you in hysterics. There are the requisite moments of bad dialogue – the most hilarious of which is when the police ask a scientist to identify what type of fish left footprints in the sand. There is much bad acting from the entire cast, although Elaine Dupont, cast as a sultry strumpet, struts her stuff with relish. For all that, Monster from the Surf is a film that tries and, like an idiot child, one that proves somewhat lovable in its ineptitude.

The film’s one surprise – and a reasonably effective surprise too – is its revelation that the monster is not a creature but one of the teens’ fathers’ dressed in a costume. This reinforces the views of these teen horror movies. In many of the abovementioned films, the teens are portrayed as decent kids who only want to be allowed to cut loose and have some harmless fun, while adults are portrayed as stifling authority figures who will stop the fun at all costs. Monster from the Surf plays the symbolic dialectic up more than most of these films in that the central teen is seen as divided between obligation to undertake serious work (following his father’s footsteps as a scientist) and spending his time on the beach with his friends. The monster is then revealed to be his father who is conducting the killings, having been driven crazy by his son’s dereliction of duty. The entire symbolic war that the teen monster movies embodied beneath the surface was never more clearly illustrated.