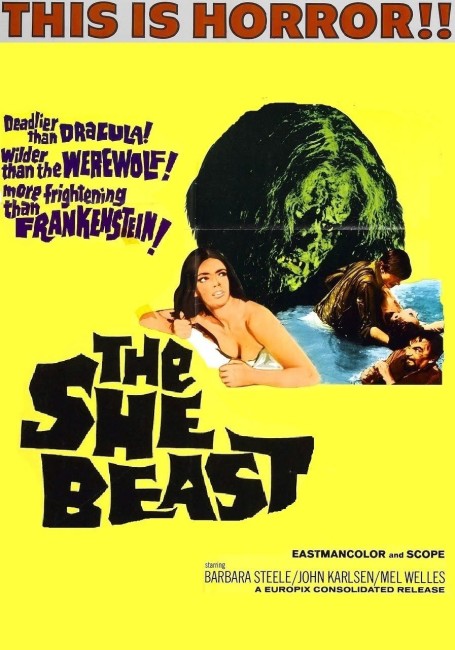 aka The She Beast

The village of Balbrash in Transylvania in the year 1765. The villagers pursue and capture the hideous witch Bardella and kill her by drowning her in the lake, not before she promises to return and take revenge on them. Two hundred years later, English couple Philip and Veronica arrive in Balbrash on their honeymoon and sign into the inn. They go to leave in the morning but crash into the lake after skidding to avoid a truck. Philip is dragged out but when they search for Veronica’s body, all they can find is a hideous figure that looks like Bardella. Possessing Veronica’s body, Bardella begins killing around the town. Philip seeks the help of Count Gustav Von Helsing, a descendant from a famous aristocratic line of monster hunters, to get Veronica back.

Revenge of the Blood Beast/The She Beast was one of the handful of films made by British director Michael Reeves (here billed as Mike Reeves). Reeves was briefly hailed as the young wunderkind of English horror. He was assistant director and stepped in to uncreditedly direct some of the Italian-shot Castle of the Living Dead (1964). He sufficiently impressed that film’s producer, American Paul Maslansky, who later produced works like Damnation Alley (1977), Return to Oz (1985) and most famously the Police Academy series, who signed on to make Revenge of the Blood Beast/The She-Beast. Reeves helped raise much of the money for the film himself. Reeves followed this with the excellent The Sorcerers (1967) and in particular the grim historical film Matthew Hopkins – Witchfinder General (1968), which is usually just abbreviated as The Witchfinder General. Sadly, Michael Reeves had his promise shattered with his death from an overdose of barbiturates in 1969 – at the age of only twenty-five – during pre-production for The Oblong Box (1969).

Revenge of the Blood Beast/The She Beast gives the impression of being made in clear imitation of Mario Bava’s Gothic classic Black Sunday (1960). This featured a near-identical plot in which a witch was resurrected in the present-day and possessed a modern woman (played by Barbara Steele in both films). The presence of Steele, who became a cult horror actress in the 60s as a result of Black Sunday, makes the connection overt, while the film takes the connection further by going to shoot in Italy (which stands in for Transylvania). The only difference is that Michael Reeves plays this film more for comedy and lacks the amazing style that Mario Bava gave Black Sunday. Oh, and Reeves only had Barbara Steele for one day of shooting and so, while Steele played both the witch and her ancestor in Black Sunday, the scenes with the witch here are played by an actor in a hideous mask. This serves to rob Revenge of the Blood Beast of Steele looking alluring, evil and mysterious and gives her the substantially less interesting role of a modern housewife, which one feels is a piece of casting that fails to use her to her best advantage.

Revenge of the Blood Beast/The She Beast and Castle of the Living Dead were the only English-language films of the era to try to mimic the Continental Gothic film. Revenge of the Blood Beast is a decided oddity. More often it feels like a variant on the English tourists abroad comedy rather than a work of horror. There is the clear emphasis on comedy throughout, something that was rare in 1960s horror, making it a very strange beast that you are not sure which way to take.

The main problem with the film is that hardly anything happens. The entire first half is spent with the couple meandering around the hotel. The witch never appears during this time – and when she is eventually resurrected, she only spends her time running around the countryside. She never seems to do much in the way of killing people or taking the revenge that she promises to do. The worst part is the car chase that takes up the last ten minutes of the film, involving the heroes in a stolen prison van being pursued by idiot cops in a vintage car and others on motorcycles that for no particular reason run in every direction, which seems construed more as a Keystone Kops routine than something that belongs in a horror film. It is a long way from the intensely haunted atmosphere that Black Sunday and other efforts of the continental Gothic achieved.

The cast includes Ian Ogilvy, a British actor of handsome looks, who was at one point a considered contender for the role of James Bond and is probably best known for the tv series Return of the Saint (1978-9). Ogilvy and Michael Reeves went to school together and Reeves persuaded Ogilvy, who was then a struggling actor, to star in the film, with this becoming Ogilvy’s first film role. (Ogilvy also appeared in all of Michael Reeves’s subsequent films). John Karlsen – not to be confused with John Karlen who appeared in tv’s Dark Shadows (1966-71) and Daughters of Darkness (1971) – was a minor actor in continental cinema. He has an unusual, tall and gauntly physical appearance and presents a reasonably commanding presence as the monster hunter of the show.