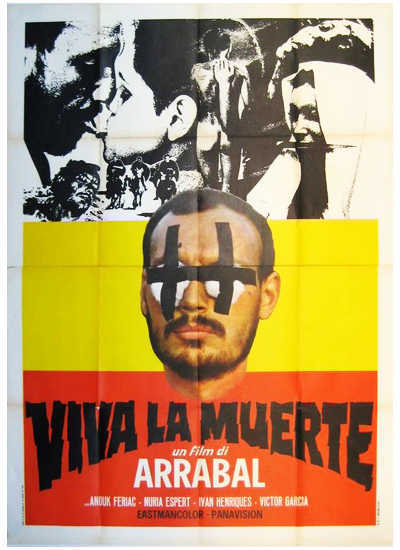 Young Fando is unable to understand why his mother betrayed his father, a Communist and an atheist, to the Fascists. He imagines the sadistic ways in which his father and others are treated by the authorities as all around him the Fascists and Church inflict mindless cruelties.

Viva La Muerte was the directorial debut of Fernando Arrabal – here billed only as Arrabal – a renowned playwright who would go on to make several other films, including The Emperor of Peru (1981). Arrabal grew up in Spain during the Spanish Civil War where his father was arrested by the Fascists. In the 1950s, Arrabal relocated in France where he would later form the avant garde Panic Movement along with Alejandro Jodorowsky.

With Viva La Muerte, Arrabal has set out to make a document of his childhood and the horrors of the Fascists. The film was shot in Tunisia and is relatively obscure. It is a crude film directorially – it alternates between good colour stock and dream sequences that seem like a video-recording that has been re-recorded through multiple generations of copies.

The relative crudities of the piece do not however detract from the full-on shock value that much of the film contains. There is no real plot – just a series of images that play on the mindless cruelty of fascism and the Catholic Church. A man is buried up to the neck in the sand and his protruding head is then kicked in by the hooves of onrushing horses; hot needles are shoved into eyeballs and the eyes devoured like kebabs; an aunt bares her back and begs the youthful hero to whip her for the sake of his late grandfather’s eternal salvation; a priest shoves the hero’s finger into a fire as a minor punishment; a homosexual survives a firing squad execution only to be dispatched with a handgun fired up the anus; a priest is castrated and forced to eat his own testicles, all the while praising the Lord for such a gift; a wife shits on the head of the husband she betrayed to the gallows as he waits to be hung.

There are a number of scenes of torture to animals – beetles sliced in half with a razor blade, bug sandwiches and a scene where a bull’s body is cut open and gutted, someone sewn up inside the carcass and the giant testicles devoured. There are also a series of memorably twisted and surreal illustrations over the credits, which are credited to [Roland] Topor, the Belgian author of Fantastic Planet (1973) and The Tenant (1976), a fellow member of the Panic Movement. Jodorowsky also based his first film Fando and Lis (1968) very loosely on a play by Arrabal.

Less clear is what Arrabal is trying to do with the film. You are never sure why all the sadism and shock effect is there – it just is. Are they sadistic fantasies in the mind of the boy imagining what happened to his father? Is Arrabal attempting to make some comment upon Fascism and the Church? If so, it is not entirely clear. In some ways, Viva La Muerte feels like a dry-run for Pier Paolo Pasolini’s masterpiece of inhumane depravity Salo or 120 Days of Sodom (1975), which more clearly made a connection between fascism and extreme sadism. A Salo maybe crossed with Bunuel’s Un Chien Andalou (1928).