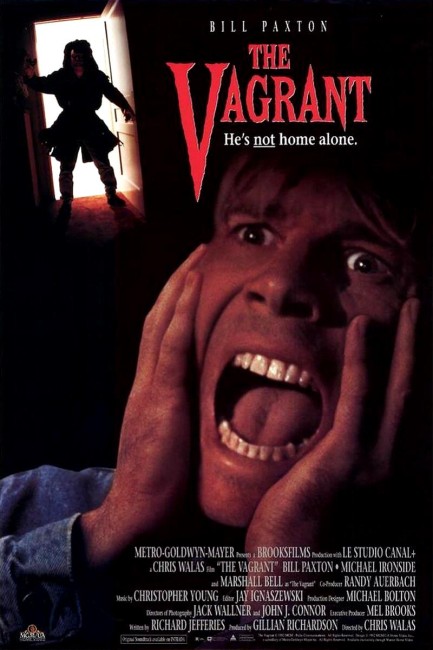 Graham Krakowski, a rising young accounts executive in Phoenix, Arizona, buys a house. Upon moving in, he finds a vagrant is squatting there. Graham continues to see the vagrant around the area and believes he is breaking into the house at night. The vagrant continues to appear in the house, even after Graham installs fences, a gate and security system. Graham also believes the vagrant is responsible for murdering a neighbouring old lady. His attempts to alert the police come to no avail. The obsession with the vagrant comes to take over Graham’s life.

Chris Walas has worked as an effects artist since the late 1970s and has credits on classic films like Raiders of the Lost Ark (1981), Scanners (1981), Gremlins (1984), Enemy Mine (1985) and The Kiss (1988), among others. He received an Academy Award for his work on David Cronenberg’s remake of The Fly (1986) and was then selected to direct the sequel The Fly II (1989). The Vagrant was Walas’s second directorial outing and his only other venture into the director’s chair to date. Outside of that, Walas has also acted as a producer on several Ethan Wiley films Bear (2010), Elf-Man (2012) and Journey to the Forbidden Valley (2017), co-writing the latter.

The 1980s horror genre made a number of makeup effects artists into stars in their own right. Several makeup effects artists were allowed to assume the directorial chair. John Carl Buechler made Troll (1986), Friday the 13th Part VII: The New Blood (1987) and a handful of other films; Stan Winston directed Pumpkinhead/Vengenace: The Demon (1988) and Upworld/A Gnome Named Gnorm (1991); while there was also Tom Burman’s Life on the Edge/Meet the Hollowheads (1989), Tom Savini’s Night of the Living Dead (1990), James Cummins’ The Boneyard (1991); Screaming Mad George’s The Guyver (1991), Bob Keen’s Proteus (1995), Robert Kurtzman’s The Demolitionist (1996) and several other films, Kevin Yagher’s Hellraiser: Bloodline (1996) and Gary J. Tunnicliffe’s Within the Rock (1996).

The Vagrant comes with a reasonable cast – Bill Paxton as the hard-done-by yuppie hero, Michael Ironside as a detective, Marshall Bell as the titular vagrant, Mitzi Kapture (an actress who never quite attained the profile she should have) as Paxton’s girlfriend, Stuart Pankin as Paxton’s boss and Colleen Camp as the slightly crazed realtor. The film is produced by Brooksfilm, the production company of Mel Brooks, responsible during this era for other works like David Lynch’s The Elephant Man (1980) and The Fly, as well as the French company Le Studio Canal+. And yet for all that is arrayed behind the camera, The Vagrant only played some theatrical releases in the US but went to VHS in other territories.

Contrary to what one expects, Chris Walas does not direct a Makeup Effects Vehicle but a paranoia comedy. There are some makeup effects used to represent The Vagrant’s filthy and suppurating features but this is not primarily a makeup effects heavy film as say The Fly II was. What it is is an economic horror film – akin to a film like Pacific Heights (1990) where the lives of homeowners are turned into a nightmare by psycho tenant Michael Keaton or The Occupant (2020) where an unemployed man invades the life of the man who took over the apartment he was forced to vacate. Here as much as any physical threat The Vagrant brings, the problem is also Bill Paxton’s escalating costs in installing security systems and fences. It is in effect a film about a yuppie buying a house and having his anxieties about the debt burden literalised. The film I was most reminded of was Of Unknown Origin (1983) with Peter Weller as a homeowner whose life was overturned by a seemingly intelligent rat invading his home – substitute rat for homeless guy and they could be very similar films.

In tone Chris Walas directs somewhat akin to the suburban paranoid comic tone of Joe Dante’s The ‘Burbs (1989) or maybe even Parents (1989). That said, the comic tone is not always clear and the film wavers. The middle of the film takes an interesting twist where we go from a sinister figure in the house to the suggestion that the vagrant only exists in Bill Paxton’s mind. The film has an unnecessary third act where Paxton is accused of the murder, acquitted and then takes a job as the manager of a trailer park. I think part of the reason the film was not a success is that Chris Walas never successfully hits a tone that is either comedy or horror or both, rather all we get is a frenetically paranoid tone that sometimes gets wound to a surreal frenzy. And for all that, it reveals itself as a fairly ordinary psycho film at the end.