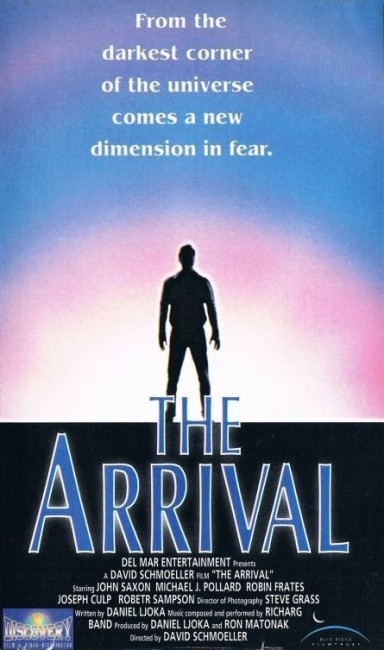 Max Page is having his 73rd birthday when a light from the sky crashes near his house. As the authorities cordon off the area, something burrows beneath the ground towards Max and he collapses and dies. However, he revives on the autopsy table and gets up, feeling in much greater health than before. Thirteen weeks later, FBI agent John Mills is tracking a serial killer slaughtering woman in the area when the trail leads him to Max who has gone missing. Max’s son is puzzled when Mills shows him photos of Max in which Max now appears twenty years younger. As they try to find Max, they realise that he has been taken over by something alien that has turned him into a vampire that feeds on estrogen, which has also had the effect of rejuvenating him.

The Arrival – which should not be confused with David Twohy’s alien invasion film The Arrival (1996) or Denis Villeneuve’s alien visitors film Arrival (2016) – is a genuine oddity. It has a conceptual swim of wild ideas that sound promising in synopsis – an alien vampire parasite that devours estrogen from nubile women, an old man who is progressively getting younger. However, in practice the film is considerably less than it might be.

Everything is presented on screen in a plain and pedestrian manner, where the film is only held together by the strangeness of the ideas and the viewer wondering what is going on. Even then one ends up disappointed – explanation about what is going on comes minimally at best. Directorially, The Arrival never rises above the routine.

There are one or two amusing throwaway sequences – Carolyn Purdy-Gordon’s cameo an alcoholic who is trying to return a bottle to a liquor store when she has drunken most of the contents, and one of the lesbian girls who goes on about potential health hazards before lighting up a cigarette. The two actors playing Max – Robert Sampson and Robert Culp’s son Joseph – fail to resemble one another.

Director David Schmoeller is a director of low-budget sf/horror films, usually for Albert and Charles Band. His other works include:– the strange Tourist Trap (1979) about a backwoods motelier and his living mannequins, the stalker film The Seduction (1982), the psycho film Crawlspace (1986), Catacombs (1988), Puppetmaster (1989) – the first in the popular video series, Netherworld (1992) and the children’s films The Secret Kingdom (1997), Search for the Jewel of Polaris: Mysterious Museum (1999) and Little Monsters (2012).