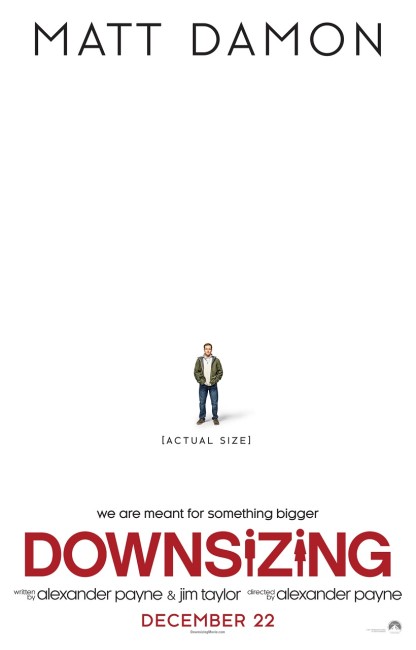 Norway’s Evardsen Institute introduces a process that will allow human beings to be shrunken to about five inches tall. They posit this as a solution to humanity being able to live sustainably by consuming less resources. Ten years later. Paul Safranek is an occupational therapist living in Omaha with his wife Audrey. They aspire to buy their own home but the cost of doing so is beyond them. After meeting friends who have undergone the shrinking process at a school reunion, they take a tour of Leisureland, a community of small people. They find that this will mean that they can afford a palatial home and decide to undergo the process. However, Paul wakes up after undergoing the treatment to discover that Audrey has had last minute doubts and backed out. Settling into his new home on his own, Paul befriends neighbour Dusan Mirkovic’s maid, Vietnamese refugee Ngoc Lan Tran. In the process, he discovers a whole miniaturised community underclass that lives outside the walls of Leisureland. After accidentally breaking Ngoc Lan’s artificial leg, Paul is obliged to take on her cleaning duties and discovers an attraction. However, this is threatened when a trip to Norway reveals that an Antarctic tremor has unleashed a lethal dose of methane that threatens the whole world.

Alexander Payne has gained considerable acclaim and awards recognition over the last two decades as director/writer of films such as Citizen Ruth (1996), Election (1999), About Schmidt (2002), Sideways (2004), The Descendants (2011) and Nebraska (2013). These are all non-genre films and commonly feature protagonists undergoing mid-life crises. These have netted Payne three Academy Award nominations for Best Director and one nomination and two wins for Best Adapted Screenplay. Downsizing is Alexander Payne’s first genre film, although he is also listed as a co-writer on Jurassic Park III (2001).

The miniaturised people theme has always held a certain fascination in genre material from the various versions of Gulliver’s Travels (1726) to films such as Dr Cyclops (1940), The Incredible Shrinking Man (1957), Fantastic Voyage (1966) and Honey, I Shrunk the Kids (1989) to tv’s Land of the Giants (1968-70). Miniaturisation is not exactly a common theme – the only major miniature people film we have had in the last three decades has been Marvel’s Ant Man (2015).

The miniature people theme always comes with some a number of plausibility issues from a scientific viewpoint. Assuming it would be possible to reduce a person to about one-fourteenth of their size, all of their body mass has to go somewhere. This leaves either of two options – removal or compaction – but either of these present significant problems. Removal of body mass also means removal of brain tissue meaning that reducing someone the size of dormouse or a frog would only leave them with the equivalent brainpower. The other way to go would be compaction but increasing the density of someone’s body mass so that they would inhabit a smaller space would mean substantially increasing their weight within a smaller area such that they would probably leave dents in the ground with every footprint.

The other issue coming in to play is that while the person would be much smaller, the laws of physics would still act normally. We do see this sort of in the scenes in Norway where the boat’s wake on the fjord looks unnatural, which you take as an attempt to approximate the way water would move around a model boat. However, there would be other issues too such as the question of whether someone at miniature size would still be able to process food and air when the molecules would suddenly be a whole lot larger than a normal body is used to dealing with.

The film also posits the idea of miniaturisation as a solution to consumption issues around the world. For Matt Damon and Kirsten Wiig, miniaturising presents a solution to being able to afford to buy a decent home. The thinking that being smaller means using less resources therefore money will go a lot further seems naive economics at best. You suspect that if such a reality came to pass then all that would happen is corporations rushing to take advantage of the small boom and inflating prices – someone has to design all the miniature houses, furniture, clothing and process the food, for example. The lack of people able to perform precision miniature craftsmanship would be scarce, making the cost of such goods very high at the outset.

One should always be wary of a non-genre director deciding to dabble in genre material – usually accompanied by much insistence that what they are making is not a genre film (which only reads as them considering genre association as beneath them). Nevertheless, Alexander Payne presents the premise to us straight up and has everyone accepting it with matter-of-fact calmness – greeting old friends that have gone small with fascination, goodbye parties held for those undergoing the treatment, sales pitches and real-estate meetings about purchasing a house – that is the essence of good science-fiction.

On the other hand, after introducing the premise, the film slows down as soon as it gets to Leisureland. All of the other abovelisted miniaturisation films have the little people engage in a series of adventures in the big people’s world and hold the fascination of seeing them trying to navigate or use big objects. Here however, after Matt Damon is shrunken, Payne shows almost nothing more of the big world – one scene of Damon signing his divorce papers, another with him carrying a giant-sized rose, his venturing into the shantytown built around the inside of worker’s huts and some full-sized butterflies at the end, but that is it. It seems almost an abandonment of all the interesting possibilities of the film’s premise.

Downsizing also confounds you when you keep trying to think of it in terms of a genre film. It raises plot elements that you think any other film would have taken and run with but instead goes completely sideways with them. One of these is the introduction of the End of the World in the latter sections. Almost any other film would have created a big drama about racing to find a solution or regarded the settling into the shelter as the climactic hope for the future. By contrast here, Alexander Payne raises the End of the World off-screen but then only uses the shelter as a way for Matt Damon to have to make a choice between the future and the love right in front of him.

Equally, the film takes a fascinating mid-film twist where Matt Damon becomes aware of a whole social and ethnic miniaturised under-class living in a shantytown beyond the walls of Leisureland. The film has been described as satire by a number of reviewers but all I came away asking is exactly what these other commentators thought it was that the film was satirising (usually in satire there is some clear target that is being lampooned). Another film might well have become indignant about the social disparity, about how contemporary social divides have been copied over to the miniature world, but Alexander Payne doesn’t seem interested in exploring any of that.

Contrarily, what he does seem to be interested in is creating another relationship drama – initially the comic one of Matt Damon being forced to work as Hong Chau’s slave after breaking her artificial leg and then a not-entirely-convincing one where he suddenly develops feelings for her. Here Matt Damon plays another variant on the typical Payne protagonist who discovers a renewed sense of purpose after undergoing a mid-life upheaval. Certainly, what you commend the film for here is Hong Chau’s performance where she manages to give all of her scenes a live wire determination and often plaintive emotion despite her performance being delivered through broken English.

(Nominee for Best Actress (Hong Chau) at this site’s Best of 2017 Awards).