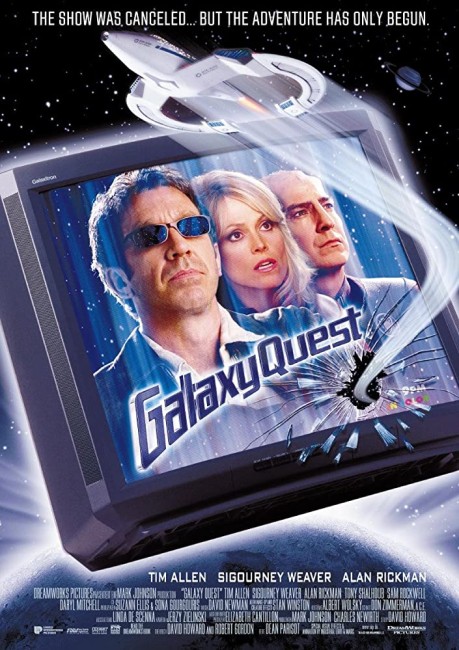 The science-fiction tv series ‘GalaxyQuest’, about the intergalactic adventures of the USEA Protector, was cancelled in 1982 but its cast, otherwise a bunch of has-beens, make their living at conventions from a loyal and devoted fan following, even though they hate the parts they have been typecast in and the lines they are forced to keep repeating. Jason Nesmith, who plays the Protector’s commander Peter Quincy Taggart, is then contacted by aliens from the planet Thermia. The Thermians believe that the exploits of the ‘GalaxyQuest’ crew are documentaries and see the Protector crew as their last hope in delivering their people from the warlord Sarris. Now the actors find themselves transported aboard an exact replica of the Protector where they are suddenly forced to fight an intergalactic war for real.

Of all the genre fads of 1999, the oddest was perhaps a run of films about Star Trek (1966-9) fandom. First there was the wide release of the documentary Trekkies (1997), which charted the eccentricities of fan behaviour, then there was the general release of Free Enterprise (1998) about two fans who meet William Shatner. These were followed by the positively ingenious GalaxyQuest.

GalaxyQuest starts out with an hysterical premise that is a thinly disguised blend of fact – what if there was a group of has-been actors from a cancelled intergalactic adventure series who had been spent the ensuing years living off a devoted fan following at conventions? – and gives it an hilarious spin – what if aliens turned up believing that the tv series was a documentary and threw the actors into the midst of a real intergalactic adventure?

GalaxyQuest may not refer to Star Trek in name but in every other regard it could be. The designs of the bridge and engineering sets, the spaceship and the costumes are all almost identically modelled on Star Trek counterparts. There’s much fun to be had in spotting the character likenesses – Alan Rickman is the Leonard Nimoy/Mr Spock counterpart, mirroring Nimoy’s becoming fed up with being perpetually identified with the Spock role; Sigourney Weaver, in plunging neckline and given only dumb stock phrases to parrot, is a combination of Marina Sirtis and Nichelle Nichols; and Daryl Mitchell plays the Wil Wheaton/Wesley Crusher counterpart.

Particularly sharp is Tim Allen’s send-up of William Shatner. The part is written into the widespread fan perception of William Shatner as a womaniser and an egocentric who frequently stole the limelight for himself. There’s an especially good scene in a bathroom, which mirrors some of William Shatner’s discoveries in his Star Trek Memoirs books, about him finding out that everybody else regarded the cast as nobodies and none of the others in the cast liked him.

GalaxyQuest is particularly devastating when it comes to the portrait of the original Star Trek actors – seeing them as has-beens who have barely ever worked again outside of the series and have spent the ensuing years milking the slavish fan audience for money. (Unlike real life though, GalaxyQuest lets its actors off the hook rather easily, eventually transforming them into heroes, and never giving us a glimpse of how exploitative and tacky some of the Star Trek actors have become in merchandising themselves – charging $10,000 convention appearance fees and the long line of ghost-written sf novels that are sold under the Star Trek cast’s names, not to mention William Shatner’s infamous ventures into the recording industry, which are widely regarded as deservous of music industry’s equivalent of the Golden Turkey Awards).

GalaxyQuest is a wonderfully knowing film for anyone who has spent any time hanging out around Star Trek fandom. It wittily punctures cliches and long-running fan jokes about the series. There’s the bit part actor who played a security guard in the series (in fanspeak a Redshirt – usually a character in Security who would appear once only and would be killed off by the episode’s resident menace) who realises once he gets into the action that he is the most expendable. And then there’s Sigourney Weaver in pushup bra and plunging neckline repeating stock technical questions during a mission conference and then turning to snap – “I know it’s a dumb part – but it’s the only part I’ve got on this ship and dammit I’m going to do it well.”

Action cliches are hilariously sent up – Tim Allen does forward rolls from boulder to boulder to head into the action while the others calmly stroll across; people try to offer helpful suggestions while Tim Allen is being attacked by a rock monster – “Look around and see if you can find any materials to build a lathe with” – that wittily puncture planetary survivalist cliches.

And then there is the encounter in the ship’s bowels with crunching pistons – “Why would anybody build a stupid crunching device right here? It was a badly written episode, that’s why.” But the funniest of such moments is the proposed solution for shutting down a nuclear reactor – by calling up a nerdy techno-geek, only to have the mission being stalled seconds before the ship is about to blow up because the nerd’s mother makes him put the garbage out.

GalaxyQuest is definitely a film written by hardcore Star Trek fans and con attendees – the opening scenes at the convention hold a painfully knowledgeable portrait of Star Trek fans – depicting the overweight people who come dressed in badly-fitting uniforms, the overeager and socially ill-adept nerds clamouring for celebrity presence, the female fans eager for even the slightest hint of romance between characters and the geeks who get caught up in the minutiae of techno-babble.

GalaxyQuest is a film that conducts several delicate balancing acts – that of sending up science-fiction adventures, yet also of being one too; that of making a film for Star Trek fans, yet also giving it an appeal that carries it to mainstream audiences; of having a hero that is a limelight grabber and an egotist, yet also allowing him to become a hero too. The film succeeds in walking the wire between the several sets of fences that it sits on and does so with considerable sophistication. It is a wonderfully knowing film.

In the late 2010s, there were announced plans for a GalaxyQuest tv series, although these have yet to emerge. Somehow one feels that it would be something that overstates a joke that emerged perfectly the first time around.

Also of note among the various Star Trek spoofs was the Futurama episode Where No Fan Has Gone Before (2002), which did actually get the sanction of and contains voice appearances from most of the series’ original cast members. Other Star Trek parodies and films about fandom include the German (T)Raumschiff Surprise – Periode 1 (2004), Star Wreck: In the Pirkinning (2005) and the tv series The Orville (2017– ).

Most of director Dean Parisot’s work has been in television. Theatrically he also directed the Jim Carrey remake of the comedy Fun with Dick and Jane (2005). the action sequel Red 2 (2013) and Bill & Ted Face the Music (2020).