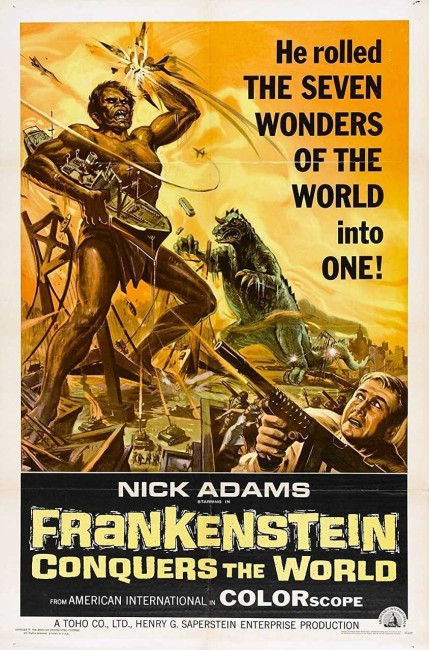 During World War II, the Germans take the heart of the Frankenstein monster to Japan. The monster’s heart is immortal and unable to be destroyed. It is then caught in the Hiroshima atomic bomb blast. In the present day, Dr James Bowen, an American doctor working in Japan, and Sueko, his Japanese nurse girlfriend, encounter and befriend a strange boy. They realize that the boy has grown out of the Frankenstein heart. The boy continues to grow to giant size and makes an escape. Bowen and Sueko try to stop the military from destroying the boy as he causes chaos across the countryside. At the same time, a monster that burrows underground rampages across the countryside where its trail of destruction is blamed on Frankenstein.

With the success of Godzilla, King of the Monsters (1954), Toho Studios and Japanese cinema discovered a public thirst for giant monster movies – the kaiju eiga. As Universal had discovered in the 1940s with their monster sequels, the formula was fairly limited and the solution to this came in teaming monsters up. Toho first attempted this with King Kong Vs. Godzilla (1962), which was successful enough for them to start pairing up monsters from their own movies beginning with Godzilla vs the Thing (1964). Like King Kong Vs. Godzilla, Frankenstein Conquers the World was an attempt to combine an American monster and appeal to American audiences.

Frankenstein Conquers the World has an outrageous premise – the heart of the Frankenstein monster is taken to Japan by Nazis during World War II but is caught in the Hiroshima explosion where the radiation causes it to grow into a giant monster. It is a premise that looms with a rich swim of potential metaphors. Frankenstein Conquers the World could have been like the original Godzilla, which used a monster movie as a startling expiation of the pain and suffering from Hiroshima. Alas it isn’t, even though it is directed by Godzilla director Ishiro Honda – the cartoony child-like pulp of the Japanese monster movie has become so established that the film quickly falls into these lines without doing anything the slightest bit remarkable with the idea.

The effects are cheap, although the climactic wrestling match between Frankenstein and Baragon, which looks like a reptilian puppy dog, is entertaining. By now, Frankenstein and his creation have become inseparably confused and the monster is simply referred to as Frankenstein rather than it being the name of the scientist as was originally the case.

Frankenstein Conquers the World was an American co-production and imports Nick Adams who also appeared in Toho’s Monster Zero/Invasion of the Astro Monster (1965) at the same time. Nick Adams, who looks like an older version of Disney star Tommy Kirk, is awful and makes a thoroughly unconvincing doctor.

War of the Gargantuas (1966) was a sequel. The creature Baragon also later turned up in Toho’s grand monster movie bash Destroy All Monsters (1968) and made reappearances in subsequent films such as Godzilla Mothra and King Ghidorah: Giant Monsters All-Out Attack (2001) and Godzilla: Final Wars (2004).