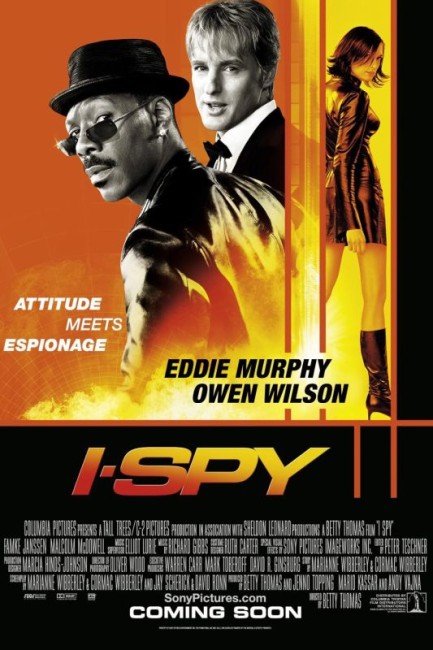 Alex Scott, a second-rate operative for the US government agency BNS, is assigned the task of retrieving The Switchblade, an invisible stealth fighter plane that has been stolen and is being held for auction in Budapest by arms dealer Arnold Gundars. Alex is paired up with championship boxer Kelly Robinson who is appearing at a title fight in Budapest sponsored by Gundars and has been personally recruited for the mission by The President. As they set out on the mission, the serious-minded Alex and the loudmouth Kelly find themselves diametrically opposed personalities caught in a perpetually bickering relationship.

Eddie Murphy is without a doubt a very, very funny guy and highly talented screen presence. His career though seems to swing between either great highs or total bombs. He first peaked in the mid-1980s with hits like 48. Hrs (1982), Trading Places (1983), Beverly Hills Cop (1984) and Coming to America (1988). In the late 1980s and into the early 1990s, this was followed by flops like The Golden Child (1986), Harlem Nights (1989), Boomerang (1992) and The Distinguished Gentleman (1992). Murphy recovered in the mid-1990s with successive hits such as The Nutty Professor (1996), Dr Dolittle (1998) and sequels to both, Holy Man (1998), Bowfinger (1999) and Shrek (2001). However, with almost predictable regularity, 2002 became another year when Murphy stumbled badly with flopperoos like The Adventures of Pluto Nash (2002), Showtime (2002) and I Spy. Indeed, the Golden Raspberry Awards went so far as to nominate Murphy as Worst Actor of the year for all three films, as well as Murphy and Owen Wilson for Worst Screen Couple and I Spy for Worst Remake.

I Spy reteams Eddie Murphy with director Betty Thomas who put him through the paces on Dr Dolittle. Betty Thomas was previously an actress, best known for her recurring role as Lucy Bates on tv’s Hill Street Blues (1981-7), before directing tv movies and winning an Emmy. As a cinematic director, Betty Thomas is rapidly emerging as someone whose work should be placed somewhere down there with the likes of Joel Schumacher, Renny Harlin and Michael Bay for its persistently annoying witlessness. Thomas made her distinction with the occasionally amusing The Brady Bunch (1995), which sarcastically deconstructed the 1970s tv series, and then followed it with Private Parts (1997), which told the life story of Howard Stern, Dr Dolittle, 28 Days (2000), which somehow managed to turn the AA process into a Sandra Bullock comedy, and subsequently John Tucker Must Die (2006) and Alvin and the Chipmunks: The Squeakquel (2009). Much of Betty Thomas’s work puts other (superior) works – tv series, Hugh Lofting’s original Dr Dolittle stories – through a wringer of vulgar, lowbrow jokes. There is a clear line in all of her work that invariably heads towards slapstick and PG-rated lavatory humour.

In this case, the film is based on the tv series I Spy that ran for 82 episodes between 1965 and 1968, featuring Robert Culp and Bill Cosby in a series of light-hearted spy exploits. Culp was CIA agent Kelly Robinson, who maintained the cover of an international tennis player, while Cosby was the bookish language and code expert Alexander Scott who maintained cover as Kelly’s trainer. I Spy was one of several dozen imitators of the James Bond films – its major note in history is that it was the first tv series to feature a Black leading man in Cosby. While it was a loose concept as a tv series, about all that remains in I Spy the movie is the notion of a spy caper with a Black and a White star. In perhaps a nod towards racial equality, the race roles have been reversed – Eddie Murphy plays the tennis pro role (here changed to a boxer), while Owen Wilson takes the role of the tech support originally played by Bill Cosby.

The I Spy tv series was light-hearted but I Spy the movie hits a low in its constant pandering to audience humour. Indeed, what it resembles is the comparison between Barry Sonnenfeld’s grotesquely overinflated Wild Wild West (1999) movie and the original The Wild, Wild West tv series (1965-9). There is almost no plot to I Spy. In fact, there is almost nothing to it other than Eddie Murphy and Owen Wilson bickering. Eddie Murphy is a very funny guy and his motormouth monologues are frequently sidesplitting, even in his bad films. Here Murphy is positively manic – his monologues come as though he is on something or at the very least has drunken about 25 espressos. Owen Wilson is a talented performer who seems, in one’s opinion, to have been miscast in comedy roles in the last few years. The bickering between the two of them just goes on and on and on and is frequently unintelligible.

All that the film offers up is a not-very-funny series of gags – Murphy and Wilson bickering while on a winch; a car chase sequence with them bickering as they dump cars from a vehicle transporter (and where for no apparent reason they suddenly abandon the car for a motorised scooter in mid-chase); and a sequence that should have been a whole lot funnier with Murphy feeding Wilson pickup lines via a contact lens camera and earpiece.

There is nothing in I Spy that convinces that the film has not been construed as a converging series of exploitable market niches – the fad for remaking 1960s/1970s tv series on the big screen; the spy spoof fad that began with Austin Powers, International Man of Mystery (1997); and Eddie Murphy’s popularity. None of it works. Betty Thomas should either go back to acting or sign up direct Adam Sandler movies where her talents would be more appropriately suited.