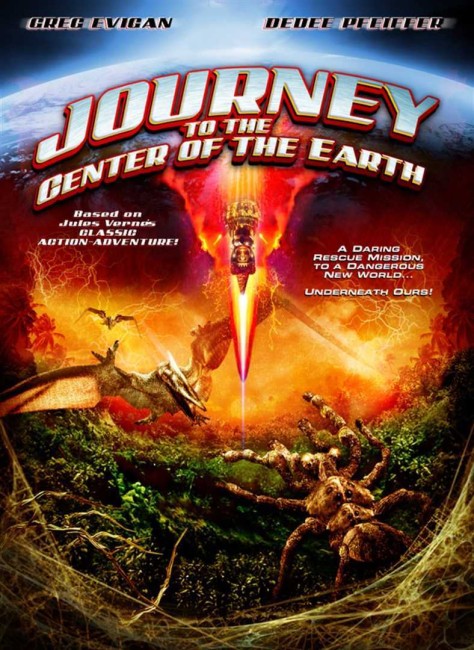 aka Journey to Middle Earth

Joseph Harnet heads a military-backed experiment that is attempting to teleport a group of female soldiers from the US to Stuttgart. However, the teleport goes wrong and the six girls reappear in the middle of nowhere. Harnet and the controllers discover that the girls have materialised six hundred kilometres underground near the centre of the Earth. The girls find themselves in a desperate fight for survival against prehistoric wildlife, including dinosaurs and giant spiders. Harnet works out that the only hope to save the girls is to persuade his ex-wife Emily Radford to allow the use of her research project, the Deep Driller, a hi-tech mechanical mole designed for drilling through the Earth’s crust. Setting out aboard the Deep Driller, the two of them to head down to the centre of the Earth.

The Asylum have a habit of treating the source material extremely liberally when it comes to their adaptations – such as their versions of The 7 Adventures of Sinbad (2010) and 3 Musketeers set in the present day or their Jack the Giant Killer that doesn’t feature any giants. Journey to the Center of the Earth has a considerable WTF component to it when you sit down to watch it after having read the Jules Verne book and seen the various other film versions. Almost all of these other versions take place in the 19th Century (although some of the films have updated the story to the present-day) and feature a group of explorers venturing into a volcano that leads down into a warren of darkened caves. Many of the films have peppered this up with encounters with dinosaurs, primitives and lost cities (which are not there in the book). However, the essentials of a journey through a series of underground caves remains in every version.

Most of the versions of the story start off with the discovery of a plumb bob that leads the way to a volcanic caldera that houses the entrance to the caves. When it comes The Asylum’s Journey to the Center of the Earth by contrast, we get a US military research team headed by Greg Evigan who is planning an experiment to teleport a group of hot babe soldiers to Germany. Naturally, this goes wrong and the soldiers are teleported to the centre of the Earth where they are pursued by dinosaurs and giant spiders.

If this were not WTF enough, you are straining trying to get your head around the fact that the centre of the Earth here is no longer a set of caves but represented by wide open and sunlit outdoors (where The Asylum went to shoot in Belize). You think, okay well they have cut costs by eliminating the caves and shooting outdoors, which sort of works with a vast stretch of the imagination but if they are underground where the heck is all the sunlight coming from? Certainly, there is some precedent for the idea of the centre of the Earth having an internal sun in Edgar Rice Burroughs’ Centre of the Earth work At the Earth’s Core (1914) – filmed as At the Earth’s Core (1976), which was ironically shot on a soundstage and the sun at the earth’s core eliminated. The Asylum seem to have taken more than a few leaves from Burroughs’s book – there is also the introduction of a drilling mole (the means whereby the explorers reached the Centre of the Earth in both books) that is quickly pressed into operation to rescue the girls.

The girls fail in any way to look like convincing soldiers – they seem more like a group of self-absorbed models that someone has abandoned in the wilderness. Clearly, nobody involved in the production has taken the time to coach any of them in basic military training as they fail to hold their guns or move in any convincing soldierly way. For that matter, the scientific experiment they take part in lacks any believability. Who sends a group of live subjects through a teleport system without having tested it first with at least some inanimate or animal subject? Even so, why would six girls teleport to a military base in Germany heavily armed, with survival gear and live ammunition – they are taking part in a scientific experiment not beaming into a military zone? The digital effects of the various dinosaurs and giant spiders they encounter are at least to a competent level, more so than most that turn up from The Asylum’s in-house team, although are sparingly used.

There are only two recognisable names in the cast. The hero of the show is played (not too seriously) by Greg Evigan, mostly a tv actor in shows like B.J. and the Bear (1978-81) and occasionally forgettable films like Stripped to Kill (1987) and Deepstar Six (1989). (His daughter Vanessa Lee Evigan also plays one of the soldiers). The other is Dedee Pfeiffer, the younger sister of Michelle who has had a not very successful career mostly playing sporadic bit parts in 80s films like Vamp (1986) and The Horror Show (1989). Both have appeared in a number of The Asylum’s other films and spark up one of those comedic relationships that mostly consists of them trading flip lines as they head to the centre of the earth.