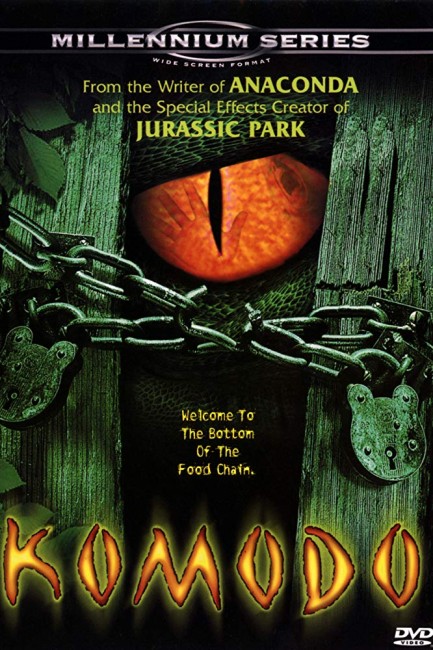 The Connally family head out to their holiday home on an island off the South Carolina coast. While there, something in the fields attacks and kills the parents and the young son Patrick’s dog. Several years later. The bodies of the parents have never been found and Patrick has retreated inside himself, no longer speaking. Psychologist Victoria Juno thinks it might bring Patrick out of himself if she returned to the island with him. Once on the island, they are attacked by komodo lizards grown to the size of large animals. At the same time, the biologist Oates arrives on the island at the behest of the Pontiff oil company who have a plant there and want the komodos eliminated. As the group are forced together to fight off the attacking komodos, the company gives Oates orders to eliminate all witnesses.

Komodo is directed by Michael Lantieri, best known for supervising special effects on a number of high-profile films, including most of Robert Zemeckis’s films since Who Framed Roger Rabbit? (1988) and most of Steven Spielberg’s films since Indiana Jones and the Last Crusade (1989), as well as Hulk (2003) and Superman Returns (2006), among many others. Komodo is the only opportunity that Michael Lantieri has been offered to direct to date.

Almost all of those cited above are B-budget films. Almost none of these have resulted in anything memorable, surprisingly least of all when it comes to the special effects people’s one area of expertise. In the majority of the cases, the respective effects artists were never invited back to the director’s chair for a second outing.

Komodo starts out seeming as though it may be one film that bucks this trend. For one, rather than do what might be the expected thing with an effects man in the director’s chair, Michael Lantieri does exactly the opposite and keeps the provision of any monsters off screen for nearly 35 minutes. During the opening scenes, the menace is kept deliberately unseen – something lurks hidden in the fields, the family dog is snatched through the dog door, followed by the off-screen attack on Kevin Zegers’ parents. The early half of the film gives more attention to the characters than one would expect of one of these made-for-video monster movies.

And when he does finally produce the monsters, Lantieri does not disappoint. The first full appearance of the komodos as one of them abruptly rampages through the living room of the house and into the kitchen comes holds a considerable jolt. Lantieri creates a number of other reasonable scenes with the komodos trying to batter their way into the back of the car or with Jill Hennessy and the others trying to drive between them on the road.

The main problem with Komodo is that while Michael Lantieri conducts an impressive build-up and revelation of the monsters, he fails to allow this to pay off. The third act of the film plays out in predictable and decidedly underwhelming ways. What the film should have built to was an intensive to-the-death struggle with the komodos. However, the final showdown is tame and disappointingly brief.

The other complaint might be that we never get any explanation of what caused the komodos to grow to about the size of large crocodiles, or indeed what tropical creatures that are usually found in South East Asia are doing in the vicinity of North Carolina. There is the suggestion that this is the way they naturally grew but nothing more than that. Surprisingly, none of this is ever tied to the sinister activities of the oil company.

Komodo cut its costs by shooting in Australia, although the Australian accents in the supporting cast show through at times despite the film’s professed claim of being set just off the North Carolina coast.

There were two further films The Curse of the Komodo (2004) and Komodo vs Cobra (2005), although these do not appear to have any connection beyond featuring similar creatures.