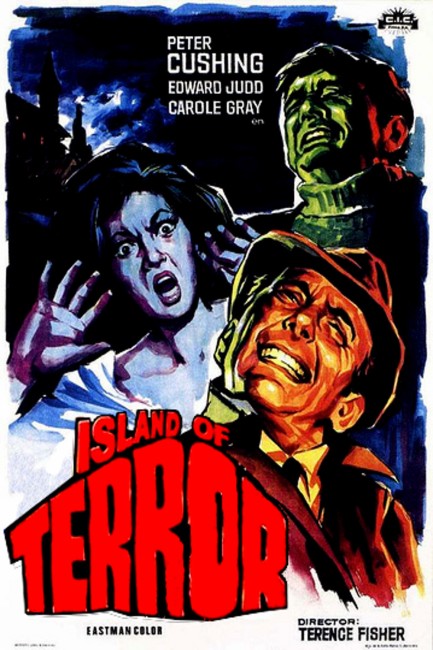 aka Night of the Silicates

On a remote Scottish island, police are baffled by the discovery of dead bodies where every bone has been inexplicably removed. The local GP calls in eminent London pathologist Brian Stanley and orthopaedic specialist David West. They discover that a local scientist has, in the course of his experiments to find a cure for cancer, created a silicon-based organism that attacks cancer cells. However, the silicate creatures have grown to giant-size and started devouring whole people. The creatures also replicate by dividing in two every 12 hours. As the silicates now move across the island, devouring every living thing in their path and prove invulnerable to all weaponry, Stanley and West race to find a means to stop them.

Terence Fisher had made a name for himself at Hammer Films with their legendary productions of The Curse of Frankenstein (1957), Dracula/The Horror of Dracula (1958) and most of their other classics from the same period. Dissatisfied with their treatment of his remake of The Phantom of the Opera (1962), Fisher for a time left Hammer and went to work for other companies. Among several other works that he made during this time was a loose trilogy of science-fiction films. Island of Terror was the middle entry – the other two films being The Earth Dies Screaming (1964) and Night of the Big Heat/Island of the Burning Damned (1967).

Even Terence Fisher aficionados consider these three SF films among his weakest efforts. It is as though Fisher’s celebrated directorial flair was only constrained to period horror and he ran aground when he attempted to make contemporary sf/horror films. The films in all cases are pedestrian and unremarkable. The same is the case with the the two early sf films that Fisher mad for Hammer – Four Sided Triangle (1953) and Spaceways (1953).

The idea here of a monster that arithmetically replicates is interesting but the monsters themselves are dull. They move so slowly that one wonders what the threat is. The film has to conduct extremely contrived scenes in order to isolate the island for them to be a threat – there are no phones; the scientists leave the island’s only emergency launch behind on the mainland when the offer of a helicopter comes up but then the helicopter has to return that night.

Fisher also fails to generate much in the way of suspense or atmosphere. There is one good scene with the initial appearance of the silicates – a tentacle first seen creeping around a door and then the silicate appearing and hemming the group in in a corridor. In one eerie moment, we see a silicate splitting apart, spewing out something like cold spaghetti and then dividing into another organism.

Island of Terror also lacks a great deal of conviction. The scene where Edward Judd is forced to cut off Peter Cushing’s arm to save his life would have had some brutal effect were it not undermined by the sight of Cushing cheerfully sitting up being bandaged in the following scene. The film taps into the peculiar isolationist mentality of 1960s Britain. Unfortunately the menace is too dull to be effective – and Terence Fisher fails to tap into any of the swimming subtexts that manage to make all good science-fiction monsters more than they are.