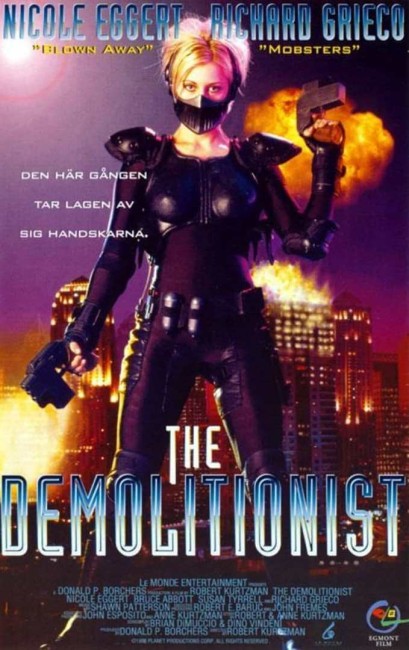 It is in the future. Undercover police officer Alyssa Lloyd is discovered trying to infiltrate the gang of Mad Dog Burns. Mad Dog leaves her crucified as a warning in his ongoing campaign to destroy Mayor Eleanor Grimbaum who has banned all guns. Mayor Grimbaum then authorises Alyssa to be used as the first subject in Professor Jack Crowley’s Lazarus Project where her blood is replaced by nantotech plasma and she rebuilt as an enhanced human fighting machine. Using a hi-tech motorcycle and a masked bodysuit, Alyssa takes on Mad Dog’s gang. She is quickly nicknamed The Demolitionist by the media. However, Mad Dog retaliates by using his influences in the council and having The Lazarus Project stopped by showing Alyssa to be unstable.

Robert Kurtzman is best known as the K in the KNB EFX Group makeup effects workshop, who of course have provided work for films such as The Evil Dead sequels, Lord of Illusions (1995) and Spawn (1997) to name but a handful. Kurtzman also earlier provided the story for From Dusk Till Dawn (1996). With The Demolitionist, Kurtzman joined an increasing number of makeup effects artists who have also branched out as directors. Although the sad truth is that the body of makeup effects artist-directed films – which so far include John Carl Buechler with Troll (1986), Friday the 13th Part VII: The New Blood (1987) and a handful of other films, Stan Winston’s Pumpkinhead/Vengenace: The Demon (1988) and Upworld/A Gnome Named Gnorm (1991), Chris Walas’s The Fly II (1989) and The Vagrant (1992), Tom Burman’s Life on the Edge/Meet the Hollowheads (1989), James Cummins’ The Boneyard (1991), Screaming Mad George’s The Guyver (1991), Bob Keen’s Proteus (1995), Kevin Yagher’s Hellraiser: Bloodline (1996), Gary J. Tunnicliffe’s Within the Rock (1996) and Anthony C. Ferrante’s Boo (2005) – has failed to yet produce a single memorable or even worthwhile film.

The most watchable to emerge has perhaps been Tom Savini’s remake of Night of the Living Dead (1990) but that was still a pallid shadow of its predecessor. One might think that when these creative talents get behind the camera they might be capable of producing some way-out makeup effects that no other director has yet been capable of but even in their own specialist regard, these films remain remarkably routine. It should also be noted that in most cases these makeup artists have failed to be invited back by anybody to direct a second film.

The Demolitionist proves no different to any of these others. The plot has been shamelessly stolen from RoboCop (1987) – a frontline police officer is brutally killed by a gang then resurrected as a law enforcement cyborg where they must fight official interference/corruption to despatch the gang. Although as much as RoboCop, The Demolitionist reminds of Barb Wire (1996) made the same year as this and likewise featuring a former Baywatch (1989-2001) bimbo in a anarchic near future action setting. In both cases, the films seem driven by some fetish with seeing their lead actresses’ pneumatic bodies encased in black leather. Both Barb Wire and The Demolitionist want to be comic-books of films, although only Barb Wire achieved this to any kind of absurdly unreal regard.

The Demolitionist has its odd moments – like one scene where Richard Grieco introduces his “negotiator” – a Doberman that spends the duration of the “negotiation” barking its head off at leash length from the cowering opposing party. Mostly however, The Demolitionist is incredibly bad. Some of the dialogue is appalling – a line like “After you’re cooked, shall I serve you with potatoes or stuffing?” falls utterly flat. Bruce Abbott introduces his resurrection device, “In the age of bio-molecular mechanics, this [chair] is God.”

Richard Grieco overacts badly in the villain part, although in the awful acting stakes has the honours stolen out from under him by Susan Tyrrell who gives the appearance that she turned up for shooting drunk. The film’s low budget tends to get in the way of any effectiveness – the city of the future is represented by a single night skyline, while the stunts look threadbare and cheap where they should have given the film a kinetic charge.

Of the abovementioned makeup effects people, Robert Kurtzman is the only one to subsequently carve out anything of a directorial career as a director. Kurtzman subsequently made the modest hit of Wishmaster (1997), which spawned three sequels, and the horror films Buried Alive (2007), The Rage (2007) and Deadly Impact (2010), and as producer of The Dead Matter (2008), Axe Giant: The Wrath of Paul Bunyan (2013), ClownTown (2017) and Secret Santa (2018).