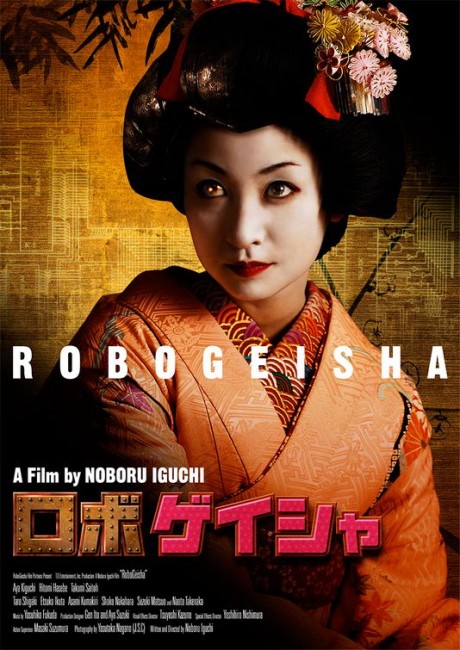 Yoshie is the awkward sister of the geisha Kikue Kasuga. Kikue always looks down on Yoshie, regarding her as stupid, ugly and an embarrassment. However, when Hikaru Kageno, the son of the head of Kageno Steel, comes to visit, he finds Yoshie more interesting than Kikue. Kikue is asked to come and visit his factory and brings Yoshie with her. There the two sisters are forcibly recruited into a program run by Hikaru and his father that will create an army of geisha assassins. After Yoshie does extremely well on the combat training exercises, Kikue tries to best her by having body parts replaced with weaponry and it becomes a competition between the two sisters as they have more and more body parts replaced by machinery. Yoshie becomes the company’s top assassin. However, when she is sent out into the field to eliminate a group of defenceless seniors, who are all protesting about the abduction of their family members by Kageno Steel, Yoshie wavers in her decision. This has Hikaru mark her for elimination. As the Kagenos set about their scheme to conquer Japan by dropping an atomic bomb inside Mount Fuji, Yoshie determines to stop them. However, the Kagenos have blanked Kikue’s mind and now pit the two sisters against each other.

Robo Geisha hits its demented stride from about the opening scene that shows Hitomi Hasebe and the Tengus attacking a party of men – stabbing them with masks that have penises coming from the nose and bikinis with spikes emerging from the cups; firing nunchukas out of their asses; Hitomi attacking one man with a buzzsaw from out of her mouth; and Aya Kiguchi going in to action using a samisen that sprouts a blade and machine-gun bullets fired from her wig.

This level of dementia continues throughout the film. There are all the ridiculously over-the-top gore and splatter effects, fight sequences and cyborg transformations we have come to expect of the genre. In one scene, a woman has her face melted down by acid milk fired from bikini cups, what the tengu refer to as the “breast milk from hell.” People sprout machine parts from everywhere – Aya Kiguchi even shows off armpit machine guns.

Later there is the meeting between CEO Taro Shigaki and the families of the missing, which he deals with by revealing he has machine guns built into the tops of his shoulders that wipe out the entire room when he bows to them. Not to be outdone, wheelchair-ridden senior Naoto Takenaka fires back, revealing that he has a shotgun implanted in the knee of his infirm leg. During the climactic scenes, Aya’s legs transform into a set of tank tracks, while the castle where the company is based turns into a Transformer and trudges up the slopes of Mount Fuji.

Throughout his films, Noboru Iguchi has an obsession with schoolgirls and of seeing their panties and asses – here we even have a martial arts sequence with the girls taking on some samurai where the lead samurai gets excited in the midst of battle after one of the girls starts doing a series of martial kicks that show off her panties. We get all the requisite mass destruction sequences as the transformer castle rampages through the town but here when the other buildings are smashed up, they erupt into fountains of gore. The climactic scenes feature the deliriously lunatic scenes of girls fighting with swords sprouted out of their butts, while Hitomi Hasebe is cut in half and her torso flies around the room and it and her severed legs both continue to fight on.