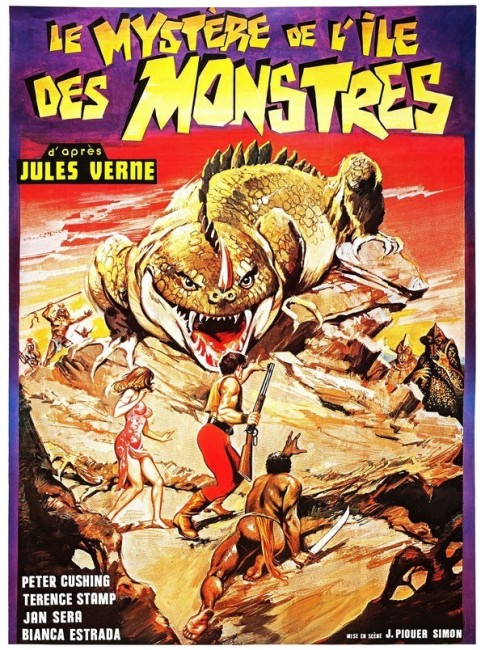 aka Mystery of Monster Island

Jeff Morgan says that he is not yet ready to marry his sweetheart Meg, the daughter of millionaire William T. Calderon, because he desires to find adventure. Calderon decides to send Jeff and his tutor, the bumbling Professor Thomas Artelet, on a journey in search of adventure. However, their ship is attacked and sunken by sea creatures and they are washed up on a desert island. Joined by Carefinatu, a native man they rescue from cannibals, and castaway Frenchwoman Dominique Blanchard, they must brave the perils of the island, which include giant monsters, cannibal tribes and ruthless pirates seeking the treasure hidden there.

Monster Island comes from Spanish low-budget genre director Juan Piquer Simon. Simon is a terrible filmmaker who has made the other genre likes of The Fabulous Journey to the Center of the Earth (1977), Supersonic Man (1979), Pieces (1983), Slugs: The Movie (1988), Cthulhu Mansion (1990) and The Rift/Endless Descent (1990), all of which are cheap ripoffs of superior genre films.

As with all of Juan Piquer Simon’s films, the effects are terrible – tatty men-in-rubber-dinosaur suits, seaweed creatures where one can see the pants the extras are wearing underneath, awful Gill Man creatures. The worst part about Monster Island is the constant slapstick tone. There is marching music on the soundtrack and clonking sound effects as people are hit on the head, as well as a shrill slapstick sidekick written in for the journey. Even the building of the hut and defences are conducted as slapstick. There is an amazingly silly climactic battle scene with the good guys warding off the pirates with a catapult that throws coconuts and a hand-cranked wooden tommy gun that fires bananas.

The film reaches a completely unbelievable twist ending that reveals everything that has happened has been a set-up to teach the young hero life lessons. This is something that turns the film more into a version of tv’s Fantasy Island (1977-84) than it does Mysterious Island.

Monster Island also toplines Peter Cushing and Terence Stamp but their appearances are limited to a combined total of about ten minutes at the beginning and end of the film, with Stamp’s character being dressed in a burnoose and clearly played by someone else for the rest of the time.