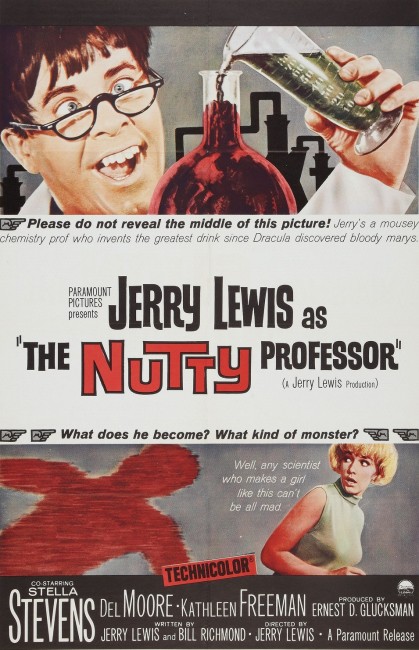 Tired of being pushed around by others bigger than he, nerdish chemistry professor Julius Kelp starts researching into physical fitness and muscle-building. He then comes up with a potion that transforms him into the egotistical, ultra-smooth lounge lizard Buddy Love.

It is said that one has to be French to appreciate Jerry Lewis’s brand of slapstick. Many audiences find Lewis’s slapstick idiocies very much an acquired taste. Even if one cannot stand Jerry Lewis, they should try to give The Nutty Professor, by far and away his best work, a chance.

Jerry Lewis plays auteur here – directing, starring and co-writing. The Nutty Professor is his comedic variation on Dr Jekyll and Mr Hyde. The Jerry Lewis comic persona has always centred around his being cast as a gauche nerd frequently verging on the imbecilic. For him, the Dr Jekyll and Mr Hyde story becomes the basis for a peculiarly touching synthesis of wimp wish-fulfillment and pathos. Thus when Jerry Lewis’s painfully downtrodden nerd takes the Dr Jekyll potion, he doesn’t transform into a bestial animal but an over-the-top parody of cool and success with women.

The story is repetitive and some gags like the talking bird and the flashback to Lewis’s childhood don’t work, but the jokes nevertheless come with a liveliness. Jerry Lewis’s performance, vying between Professor Kelp, played as a cross between a 1940s racial caricature of a Japanese and a Neanderthal, and Buddy Love, a pointed and clever parody of Lewis’s former partner Dean Martin, is marvellous. Throughout the actual transformation is never seen. The ending wherein Buddy Love wilts away to become Kelp again contains a moment of true nakedness and is a superb piece of acting on Jerry Lewis’s part.

Jerry Lewis’s only other ventures into fantastic cinema were as an alien visitor in Visit to a Small Planet (1960) and in the title role of the sex-reversed Cinderella, Cinderfella (1960).