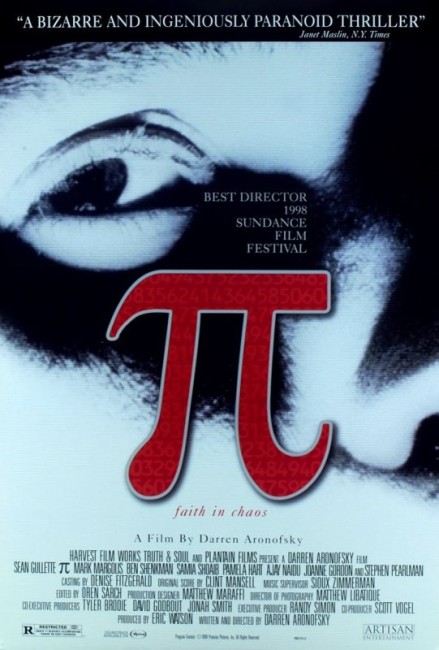 Max Cohen is a brilliant mathematician who has a theory that he can find a formula that is able to predict the patterns by which the stockmarket operates. His computer points at a 216 digit number as the answer before it inexplicably self-destructs. Haunted by hallucinations and excruciating headaches, Max is pursued by Cabbalist Jews who believe that the 216 digit number holds the lost name of God, as well as mysterious financiers who want his secret of predicting the stockmarket.

Pi was an almost unclassifiable sleeper hit that emerged on the arthouse circuit in 1998. It ventures into a unique theme that has never been dealt with in a film before – the thought life of a mathematician. (For that matter, one is unable to think of any literary science-fiction work that has dealt with such subject matter either. There had been the big success of Good Will Hunting (1997) the year before but that was more a film about the nature of genius than it was mathematics per se. With Pi though, there came a sudden watershed of films dealing with mathematics and mathematicians with Enigma (2000), the thoroughly overrated Academy Award-winning A Beautiful Mind (2001) and The Bank (2001), which has many similarities to Pi).

Pi is quite literate when it comes to its mathematics – director Darren Aronofsky and star Sean Gullette write a series of mesmerising voiceover monologues that wield literate lectures on chaos theory, Fibonacci numbers, Go, game theory and Archimedes. The film’s conceptual juggle of chaos theory, Cabbala and Godel’s Theorem starts to reach into that scary territory that quantum physics sometimes touches – the ability to give a grandiose glimpse beneath reality that makes this world seem a only pale shadow of a greater reality.

Where another film might start to reach for heavenly choruses and cliché images of communion with true understanding, Pi contrarily goes the opposite way. It is shot in glisteningly beautiful and raw black-and-white where Darren Aronofsky’s sharp cutting and focus in closeup and densely crowded detail evokes a genuine claustrophobic tension. If there are films that one might compare Pi to, the nearest that one might get is the claustrophobic weirdness of David Lynch’s Eraserhead (1977) or the paranoiac dis-ease of the Coen Brothers’ Barton Fink (1991). Seen cinematically, even on video, Pi is like sitting through the visual equivalent of a migraine headache interspersed with flashes of transcendent meaning.

Expectedly in a film such as this, transcendent breakthrough into greater understanding is something that is ultimately denied one. Running throughout the film is the metaphor of the myth of Icarus – with the hero telling the story of how Icarus stared into the sun despite cautions not to – and the film ends with Sean Gullette’s fall from greater understanding and being found in a state of blissful ignorance, unable to mathematically compute any longer. In this respect, Pi is not that far removed from mad scientist films of the 1930s and 40s in the end assumption that the greater knowledge of the secrets of the universe is something that mankind is better off not knowing.

Pi was the feature-length directorial debut for director Darren Aronofsky. Aronofsky next made the excellent drug addiction film Requiem for a Dream (2000); the mystical science-fiction film The Fountain (2006) about the quest for immortality, which also reaches for transcendent meaning; the critically acclaimed and award winning hits of The Wrestler (2008); Black Swan (2010); controversial adaptation of the Biblical Noah (2014); and the surreal horror film Mother! (2017). Aronofsky also co-wrote and co-produced David Twohy’s haunted submarine drama Below (2002).

(Winner in this site’s Top 10 Films of 1998 list. Nominee for Best Original Screenplay and Best Cinematography at this site’s Best of 1998 Awards).