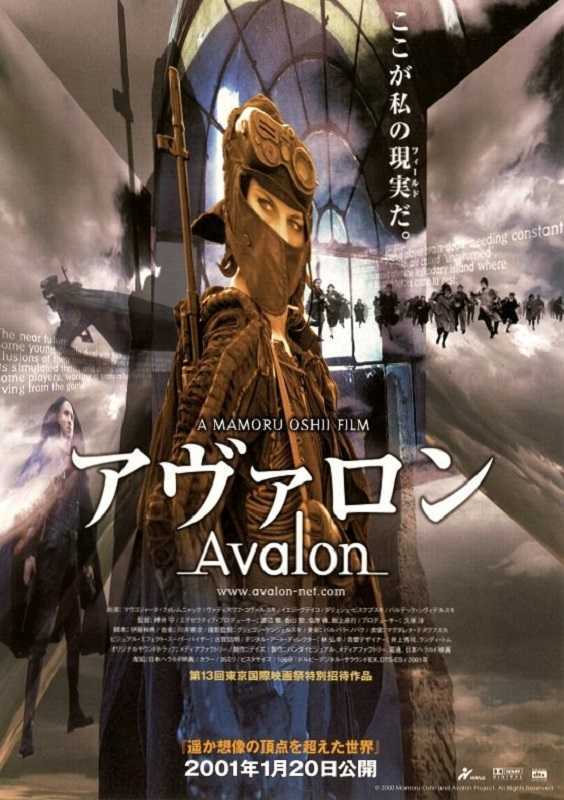 In the future, virtual reality gaming has become a huge pastime, with the biggest of these being the wargame simulation Avalon. One of the top players is Ash who insists on playing solo, while almost all others go in teams. Ash becomes fascinated with finding the ghost that appears in the legendarily impassable Level Class A, where her former comrade Murphy has disappeared.

Mamoru Oshii is one of the most interesting rising names in contemporary Japanese fantasy cinema. Oshii began working as a director in various anime tv series before becoming a feature director with the children’s fantasies Urusei Yatsura: Only You (1983) and Urusei Yatsura 2: Beautiful Dreamer (1983), both adapted from a tv series he had worked on, the science-fiction film Dallos (1983), the surreal fantasy film Angel’s Egg (1985), Patlabor: The Mobile Police (1989) and sequel. In between this, he moved into live-action with the SF action Red Spectacles (1987) and its follow-up Stray Dogs (1991), and the non-genre Talking Head (1992). He then wowed audiences worldwide with the Cyberpunk anime Ghost in the Shell (1995). Oshii would also go onto script Jin-Roh: The Wolf Brigade (1998) and produce Blood: The Last Vampire (2000). With Avalon, Oshii made a stunning return to live-action. Subsequent to Avalon, Oshii returned to animation to make the stunning Ghost in the Shell 2: Innocence (2004), his best film to date, The Sky Crawlers (2008) and an episode of Halo Legends (2010).

Avalon embodies many previous Mamoru Oshii themes – the heroine following the child-like figure through the virtual labyrinth in search of meaning as in the Ghost in the Shell films; the suggestion that this is taking place in an alternate reality as in Jin-Roh and The Sky Crawlers; the fascinated emphasis on tawdry, rundown realism as in both Jin-Roh and Blood: The Last Vampire; and, as in Jin-Roh, the use of fairytales and legends as visions that drive characters on transcendent quests.

On the minus side, many of Mamoru Oshii’s scripts, including both Ghost in the Shell and Jin-Roh, have tended to drown in a surfeit of ideas and a not always clear assemblage. To the contrary, Avalon goes the other way and is conceptually thin – all the effect comes not so much in the plot but in the extraordinary visuals that Oshii invests the film with.

2001 was a breakthrough year for anime – with both Avalon and the amazing Final Fantasy: The Spirits Within (2001). In both films, the boundaries were pushed to the point that the distinguishing line between animation and realism was blurred. Final Fantasy rendered animation to the point of almost photo-realism, whereas at the opposite extreme there was anime director Mamoru Oshii who pushed live-action to a stylised level where it was made to resemble anime.

Here Oshii photographs everything in a washed-out sepia tone (and occasionally monochrome) and with overexposed light sources – it as though the whole film is bathed in faded light. The heroine is deliberately stylised to the point that she looks like a Lara Croft or Aki, the heroine of Final Fantasy. The Virtual Reality sequences have also been given a unique look – the first few minutes as the heroine enters the game and then we suddenly see a standard battlefield scenario where killed soldiers dissolve into pixilated blurs and then the camera moves around from the explosion of a tank to reveal it as a series of sliced two-dimensional cutouts is quite stunning.

The Warsaw locations have been photographed with a hauntingly rundown, almost familiar realism. The film comes filled with retro-technology, like something out of Nineteen Eighty-Four (1984) or Brazil (1985). Avalon could almost be a Virtual Reality version of Nineteen Eighty-Four, perhaps as shot by East European surrealist Bela Tarr and his transcendentally surreal and hyper-real visions or Lars von Trier circa The Element of Crime (1984). There is an extraordinarily hypnotic power to Mamoru Oshii’s slow, somnolent drifts through the city on trams, watching the heroine walk her dog – the slowness bores some viewers but visually the measuredness and all the washed-out hyper-realism has an effect that is often stunning.

Even more impressive is the score, which is one of the most haunting that one has seen in a film in some time. Mamoru Oshii frames the hypnotically slow drifts through the city to the accompaniment of the aria Avalon, and later the heroine’s breakthrough comes uniquely intercut with the Polish Symphony Orchestra playing a full orchestral version of the same piece. It is a stunning piece of music.

Also of great note is the polyglot cultural mélange the film embodies – it comes with Japanese financing and a Japanese production crew and director but is shot in Poland with a Polish crew and cast, while the version seen here is actually in Polish language, which has been subtitled in English. The international release comes presented by both US’s Miramax and France’s Canal +.

Mamoru Oshii later returned to the world of Avalon in a segment of the action anthology film Kill (2008), which he then expanded as a feature-length film Assault Girls (2009), as well as the live-action clone wars film Garm Wars: The Last Druid (2014).

(Winner in this site’s Top 10 Films of 2001 list. Winner for Best Cinematography and Best Musical Score at this site’s Best of 2001 Awards).