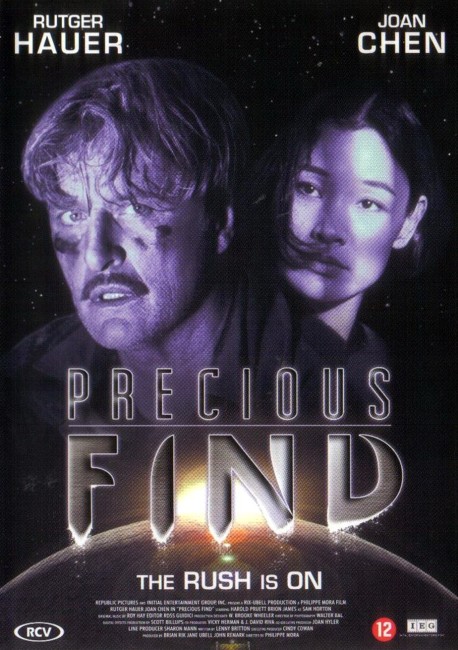 Armond Crille wins a valuable spectral readout of an asteroid in a poker game on Moon City. Ben Rutherford, a young man just arrived on the Moon and looking for work as a space miner, saves Crille from being beaten up by his disgruntled poker opponent. He then persuades Crille to join forces with him and garbage scow pilot Sam Horton. They follow the readout to Asteroid 18 and find a rich vein of ‘precious’ or gold. As they start mining the find, the three men become paranoid and suspicious of one another, each believing the others are trying to cheat them. A ruptured hose necessitates a return trip to the Moon to replenish water supplies. There Ben inadvertently lets slip about the find and is followed back by the opportunistic Camilla Jones who wants a cut of the find.

Precious Find is a film that arrived almost a decade too late. It belongs back in the 1980s when Star Wars (1977) just came out and producers everywhere were trying to tap the new science-fiction boom by offering up Westerns and other adventure films with science-fiction trappings – Outland (1981) was High Noon (1952) in space; both Message from Space (1978) and Battle Beyond the Stars (1980) were space opera versions of The Seven Samurai (1954)/The Magnificent Seven (1960); while tv’s Treasure Island in Outer Space (1991) and Disney’s later Treasure Planet (2002) revisited Robert Louis Stevenson’s Treasure Island (1883) amid interplanetary locales. Precious Find is no less than a science-fiction reworking of the classic adventure film The Treasure of Sierra Madre (1948) about a trio of miners on the quest for a goldmine, fighting off bandits and their distrust of one another along the way.

There seems a depressing lack of originality to the basic idea of Precious Find – a gold fever film set in outer space. Even then, it is not an idea that the film does a particularly good job of conveying. The production has been made on the cheap. The scenes supposedly set on The Moon have only been shot out of doors in a standard city setting; with scientific improbability, the asteroid has atmosphere and sunlight and looks exactly like it has been shot in a single canyon location; a solar twister, which is supposedly some type of interstellar storm, consists of no more than a few flashes of solarized footage; while an attack by a monster consists of a couple of shots of digitised tentacles where it is barely even glimpsed.

The very cheapness of the film fails to let Precious Find ever open up with the sense of adventure that The Treasure of Sierra Madre or any of the other films of its ilk had. The quick shooting schedule seems to have forced director Philippe Mora to hurry and get scenes over and done with rather ever than tap the story dramatically – he never gets inside the sweaty greed and distrust, the sense of the gold fever that fires up the characters. It is there in the script but Mora seems to have little interest in bringing it out on screen. A much better version of the gold prospectors in space film was conducted in Prospect (2018).

Rutger Hauer is top-billed. [This is the incidentally the third time Hauer appeared on screen with Joan Chen, the others occasions also being science-fiction films as well with The Salute of the Jugger/The Blood of Heroes (1989) and Wedlock/Deadlock (1991)]. Hauer seems to have cared little about the film and lets his performance go way off the deep end during the latter half. The real star of the show is actually Harold Pruett who projects a confident and handsome presence.

Precious Find was directed by Australian Philippe Mora. Mora made the fine horror film The Beast Within (1982) and the witty, little-seen superhero spoof The Return of Captain Invincible (1983) but his career plummeted downhill with the likes of The Howling II (1985) and The Marsupials: The Howling III (1987). Mora also made the interesting true life alien abduction film Communion (1989), but most of his output throughout the 1990s has been spoofily silly films like Art Deco Detective (1994), Pterodactyl Woman from Beverly Hills (1997) and other oddities like the black comedy Snide and Prejudice (1997), Joseph’s Gift (1998), a modern version of the Biblical story of Joseph, and the Hollywood black comedy Burning Down the House (2001), as well as the time travel film Continuity (2012). Mora can also be seen here playing the role of black market trader Kornikov who outfits the heroes for their mission, a part where Mora has seemingly modelled his performance on Peter Lorre.