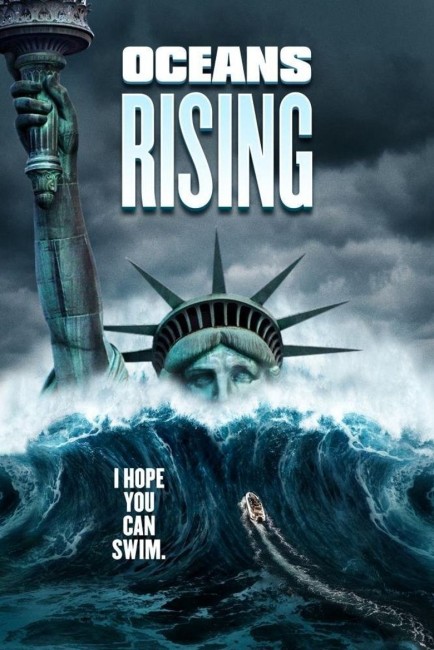 A coronal mass ejection from the sun causes massive power cuts across the country. An emergency video conference is called between The President and the National Oceanic and Atmospheric Administration. Josh Chamberlin, husband of NOAA executive Pam Cushing and a scientist with the US Geological Survey, interjects to voice his unorthodox theories about how the Earth’s magnetic field is weakening and needs to be restarted with the use of miniature black holes lest all life on Earth be obliterated. Josh’s theories are dismissed and he quits in humiliation and leaves Pam. Three years later, Pam seeks Josh out in Galveston as his predicted theories about the Earth’s weakening magnetic field are now coming true and the polar ice caps are melting. Josh is preparing a boat to live aboard during the coming flood. A tsunami hits and they are forced to set afloat in his boat. They set about picking up other survivors but internal tensions soon rise among those on board. Throughout this, Josh sets out to find a way to use large particle colliders to create the black holes he needs to restart the Earth’s magnetosphere.

The Asylum is a company principally known for Sharknado (2013) and sequels plus several other wilfully ridiculous monster movies, as well as their habit of making mockbusters – films that come out mimicking the titles of big-budget, high-profile releases in the hopes that people won’t look too closely or notice the difference. They have produced titles such as Snakes on a Train (2006), Transmorphers (2007), Allan Quatermain and the Temple of Skulls (2008), The Day the Earth Stopped (2008), The 18 Year Old Virgin (2009), Paranormal Entity (2009), Battle of Los Angeles (2011), Abraham Lincoln vs. Zombies (2012), Age of the Hobbits (2012), among others.

Oceans Rising follows the cliches of these Syfy Channel disaster movies – the discredited scientist whose warnings and theories are dismissed by the establishment until things start going sideways; the crosscut of survivors from all walks of life trying to make their way through the chaos; the last ditch effort to avert disaster by some mad science scheme. The script for Oceans Rising toys with big ideas from Global Warming (although puts them to fairly nonsensical use despite waving some vaguely credible sounding terminology in front of us).

Scientist Jason Tobias’s scheme is notable for its casual wackiness – uniting two particle colliders to create singularities on either side of the world in order to restart the earth’s magnetosphere. (Wouldn’t firing such a mass of particles in an accelerator just cause it to either overload or blow up? And should that actually create a black hole, why would it do so in orbit rather than inside the accelerator where it would promptly fall through the ground, sucking most of the Earth in along with it).

The majority of the action is confined to a regular cabin cruiser where some twenty or so people somehow manage to live for several days/weeks. As a result, the film resembles a regular boat-board drama. Even then there is no much drama going on – one crew member grabs a gun at the thought of the food supplies being tossed overboard to balance the boat’s ballast. In one scene, they pass through an ozone hole that spontaneously appears and everyone gets sunburned and then the ozone hole is forgotten by the next scene.

Oceans Rising also has the distinction of being one of the cheapest among the mini-genre of Syfy Channel disaster movies. The Asylum have given it an even smaller budget than most of their other films. There is drama built out of a race to construct a sixty-foot wall out of sandbags in front of the reactor, a scene notable for showing nothing of the encroaching ocean at all. The effects have been almost entirely minimised – a couple of crappy shots of the boat being tossed about on a tsunami; the activation of the accelerator at the end; and one quite good final matte shot of the US particle accelerator surrounded by ocean.