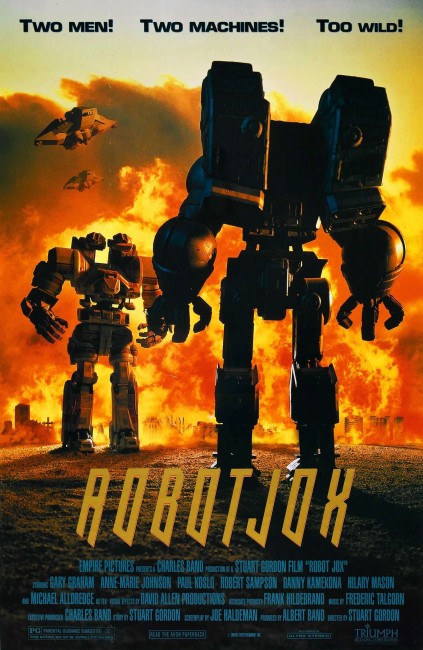 It is fifty years after the holocaust. The Earth has been split into two super-powers – the Russian Alliance and the Western Market. War has been outlawed and instead the two super-powers settle conflicts by having chosen warriors battle in giant-sized robots that mimic the movements of their pilot or jockey. Western Market fighter Achilles faces the deadly Alliance fighter Alexander. However, during the match, Achilles’s robot topples over onto the stands, killing 300 spectators. The outcome of the battle is deemed inconclusive and a rematch announced. Instead, Achilles announces he has fulfilled his contract for ten matches and that he does not want to fight anymore. Achilles then must deal with his replacement, the ‘tubie’ Athena, one of a breed of new genetically engineered jocks, who is eager to take his place. There is also a traitor who is leaking secrets of the Market weapons to the other side. Through this, Achilles is reluctantly drawn back to enter the fight again.

Director Stuart Gordon had a cult hit with the hilarious splatter comedy Re-Animator (1985). Alas, Gordon’s films since then, which include various other splatter films such as From Beyond (1986), Dolls (1987), The Pit and the Pendulum (1991), Castle Freak (1995), and Dagon (2001) and science-fiction films like Fortress (1993) and Space Truckers (1996), have generally hit a single note that reveals that black comedy splatter are about the only thing in Gordon’s arsenal. Robot Jox is one of the usually lambasted films among Stuart Gordon’s oeuvre. Contrarily, one found it to be unexpectedly good – indeed is, next to Re-Animator, probably Gordon’s best film, at least up until the extraordinary non-genre David Mamet adaptation Edmond (2005).

Stuart Gordon originally shot Robot Jox in 1986 under the title Robotjox. At the time he made it, Gordon was attempting to exploit the mid-1980s craze for Transformer toys, inspired by tv’s Transformers (1984-7) and Robotech (1982-5). The film was given a $10 million budget by Albert and Charles Band – the biggest they afforded any of their films – but became caught up by the financial collapse of their Empire Studios in the late 1980s. By the time the film was eventually released directly to video, the Transformers craze was over. That is at least for another seventeen years until Michael Bay turned the toys into a massive blockbuster franchise on the big screen beginning with Transformers (2007).

Characteristically, Gordon appears to have wanted to make a comic-book out of the film. Due to the fortuitous recruitment on script of Joe Haldeman, the hard science-fiction author known for the acclaimed and Award-winning likes of The Forever War (1975), Mindbridge (1976), All My Sins Remembered (1977) and the Worlds series, Robot Jox emerges as considerably better than it appears to have been conceived.

Haldeman is interested in creating a credible social milieu for the Transformers to take place in. The set-up owes much to Peter Watkins’ The Gladiators/The Peace Game (1969), of which Haldeman may or may not have been aware, in which soldiers fight a series of symbolic war games as an alternative to war. Haldeman sketches the story with interestingly economical strokes and is particularly good when it comes to characterisation. The scenes between Achilles and Athena where she tries to discern the meaning of luck, or even where the traitor is revealed, are well written. All play competently, although Paul Koslo’s Russian accent is unconvincing. The ending, which comes abruptly on a handshake and agreement of international cooperation between the East and West, is vaguely unsatisfying – not to mention, by the time that Robot Jox eventually came out, a redundant one.

The special effects work by David Allen, usually responsible for the cheap effects on sundry films for the Bands, is stunning. These belie the budget on which the film was made. Particularly amazing is the climactic battle. The full size of the fighting machines is conveyed and it is fantastic to watch them in battle – buzzsaw blade chains that cut arms off, chainsaws emerging from the belly of the machines, Alexander’s transformer scuttling along on six claws like a crab, and he toying with the downed Anne-Marie Johnson with the end of one giant fingertip.