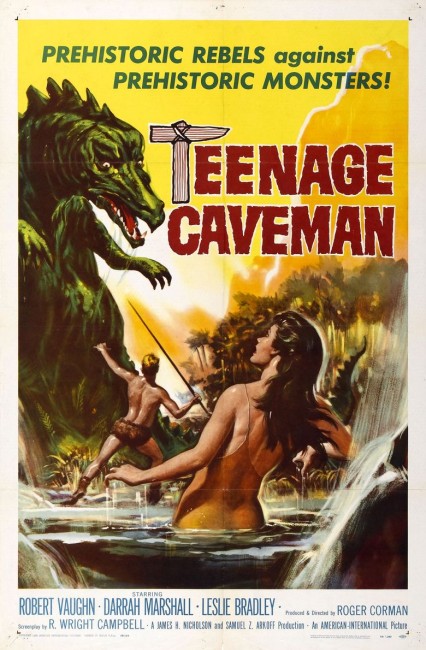 A prehistoric tribe live in a remote valley. A youth stands up to question their laws, which state that to cross the river and the Burning Plains beyond will bring death. After being threatened with exile, he and three others decides to set forth to discover the truth for themselves. They encounter giant lizards, wild dogs and eventually a man who comes from beyond the Burning Plains and holds the truth about the nature of their world.

Teenage Caveman is one of the early films from legendary B movie director and producer Roger Corman. Corman first began directing with Five Guns West (1955) and Teenage Caveman was about the 19th film he had made in the ensuing three years since then. Roger Corman’s films were ultra-cheap and often shot only in a matter of days. Corman also had an eye for spotting young talent and gave breaks to many names in the industry including Jack Nicholson, Bruce Dern, Francis Ford Coppola and Peter Bogdanovich. During the late 1950s, Corman made a number of entertaining B science-fiction and monster movies, including the likes of Day the World Ended (1955), It Conquered the World (1956), Not Of This Earth (1957), Attack of the Crab Monsters (1957) and The Little Shop of Horrors (1960), before attaining some critical respectability with The House of Usher (1960) and his series of Edgar Allan Poe adaptations.

Teenage Caveman comes with a perfect exploitation title from the AIP poster factory – they frequently used to devise the title first and then a film to go with it. That said, it is not a title that has much relevance to the film. Or even aptness for that matter – Robert Vaughn looks to be all of about 30 for the supposed teenager he is supposed to be playing (Vaughn was 26 at the time). Of course, what was happening was that Roger Corman and AIP were exploiting the success that came about after Herman Cohen, another producer at AIP, had had when he made I Was a Teenage Werewolf (1957) and I Was a Teenage Frankenstein (1957). A host of other such teenage titled films were quickly shuffled out – indeed, Corman had just finished making the non-genre Teenage Doll (1957) about girl gangs.

While Teenage Caveman is an exploitation movie, it has an inventive script. Screenwriter R. Wright Campbell structures it as a classic conceptual breakthrough story. He uses the familiar theme of championing a breakthrough of knowledge over superstition and tradition. In the unique twist ending, when the lead character makes the discovery about the world, the film manages to ingeniously turn the audience’s expectations on their head. In so doing, the film turns from what one originally perceives to be a routine One Million B.C. (1940)-styled prehistoric drama into a post-holocaust film. It is a unique and ingenious twist. Indeed, the same twist ending appears to have been mimicked by both Planet of the Apes (1968) and M. Night Shyamalan’s The Village (2004).

Unfortunately, the film’s ideas remain far superior to Roger Corman’s execution of them. It is an A-budget idea trapped in the guise of a Z-budget film. The film has been made extremely cheaply. Lizards are substituted for dinosaurs; there are some shoddy monster and bear suits; and the holocaust is depicted by monster footage from other AIP movies, including Day the World Ended and The She-Creature (1956). When the cavemen are attacked by a horde of dogs, you can see the extras grabbing onto the dogs that seem to be trying to flee. Roger Corman’s direction is extremely routine – the film has been shot quickly and the camera indifferently placed for the most part.