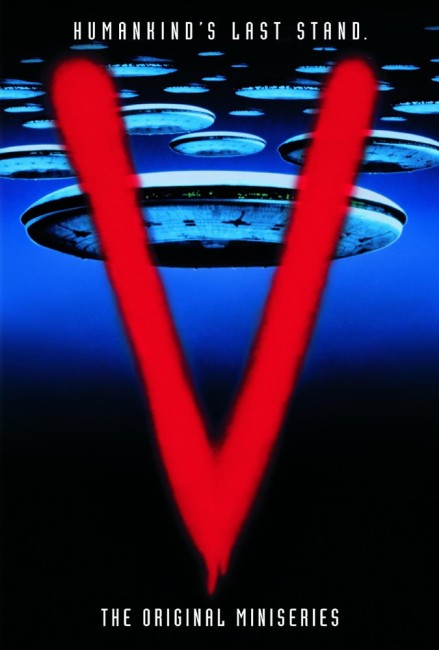 Giant saucer-shaped spaceships suddenly appear in the skies over all the major cities of the world. Human-like aliens appear from the ships and introduce themselves as The Visitors. The Visitors declare their intentions are friendly and state that they want to share their advanced technology in return for being allowed to mine certain much needed minerals. The world accepts the Visitors with open arms. The Visitors then announce the discovery of conspiracy to sabotage their efforts that is led by scientists. This becomes the opportunity for the Visitors to declare martial law and begin rooting out scientists who are allegedly involved in the conspiracy. TV journalist Mike Donovan is able to sneak aboard one of the Visitor motherships and obtains footage that shows that the Visitors are in fact reptilians that hide inside human skins and that their claim to be mining chemicals is a ruse for something more sinister. This makes him a wanted man. On the run, Donovan falls into the hands of a group of ordinary people who have formed a resistance and are determined to fight back against the Visitors.

Kenneth Johnson is a writer-producer and sometimes director who has worked principally in genre television. Johnson began as a writer and then producer on shows such as The Six Million Dollar Man (1973-8) and The Bionic Woman (1976-8), before creating and producing The Incredible Hulk (1977-82) tv series, as well as directing its theatrically released pilot film The Incredible Hulk (1977). Johnson went on from there to the success of V. Johnson followed this with the tv series spinoff of Alien Nation (1989-90), which was never that popular as a series but spawned a big enough of a cult that Johnson was able to direct four tv movie sequels. Johnson’s other work on tv has been sporadic – the short-lived ghostbusters comedy series Shadow Chasers (1985), the modernised Sherlock Holmes tv film Sherlock Holmes Returns (1993) and Zenon: Girl of the 21st Century (1999). Johnson has ventured onto cinema screens twice as director with Short Circuit 2 (1988) and the DC Comics superhero adaptation Steel (1997), both of which were poorly received.

V didn’t even start out as a science-fiction series but was apparently originally intended as a series about the Wartime resistance against the Nazis, following on from the success of the tv mini-series Holocaust (1978). After the sensation of Star Wars (1977), the network made a decision to rework V as a science-fiction series. It seems more than apparent in watching the series that Kenneth Johnson has only rewritten stock characters from a Wartime resistance story with a few science-fictional antennae.

Instead of Stormtroopers we get aliens in vaguely fascistic red boiler suits and sunglasses; instead of The Holocaust, we get a purge against scientists and the manufacturing of evidence to sway public opinion; as well equivalents of the Brownshirts and the Vichy collaborationist government. The opening title card even pretentiously states: “To the heroism of Resistance Fighters – past, present and future – this work is respectfully dedicated.” (Although presumably this dedication only extends to certain sanctioned resistance fighters – the Allied Resistance in World War II – and not resistance fighters such as suicide bombers in Iraq or Palestine).

The mini-series offers up an arresting opening where saucers suddenly appear in the skies over world cities. It is an image that was later borrowed by Independence Day (1996), although in truth both V and Independence Day stole the image from Arthur C. Clarke’s classic science-fiction novel Childhood’s End (1953), which it should be noted was also being floated as a potential tv mini-series by Philip De Guere around the time that V was produced.

It is a great opening, although sadly the mini-series puts the best scene at the start and thereafter fails to come up with anything to top it. Indeed, the only thing that ever seems to drives the show along is series of schlocky images – a man bursting out of a sub-zero factory with his hand frozen and it shattering against a railing; seeing the Visitors swallowing live rodents, waggling snake-like tongues and tearing their face masks away to reveal reptilian faces beneath. The special effects at least come up to a competent standard for the era.

V is a work that fascinatingly fails to convince on almost any level whatsoever – dramatically, plausibly, scientifically, in terms of characters or as science-fiction. I found it almost impossible to believe in any way the means whereby the Visitors managed to take over the government of Earth, institute martial law and start persecuting scientists – it is ridiculous to swallow the idea that humanity would so willingly hand over all governmental control to outsiders. People just don’t do things like that, especially to outsiders, unless there is an enormous gain to them. Nor could I believe the gullibility of the populace in terms of the blatancy of the wool the Visitors are trying to pull over people’s eyes with the manufactured evidence against the scientist collaborators. Okay so, the Nazis took over and occupied much of Europe and rounded up people, while the George W. Bush government instituted a totalitarian police state and interned suspects without trial but in both cases there was a unifying threat – the economic hardships of Germany in between the wars, the threat of terrorism – that allowed the public to willingly accept this.

There seems an equal lack of credibility to V when it comes to organising the resistance – at one point, the cell is told “Come back and everybody bring five other people” as a means of recruiting numbers, which seems an attitude designed more to sign up help for a church yard sale than a secret underground resistance. The characters lack any depth. They are only construed as cliches – the reckless reporter, the collaborators, the guy who turns his family in, the teenage girl who endangers all by thinking only of boys, the waitress with the heart of gold. The lack of any kind of moral complexity in the writing makes the show infuriatingly simplistic.

At times, I found it excruciating watching something so banal. The series even fails to work as science-fiction – like the absurd notion that aliens would come to Earth to steal water, one of the most plentiful and easy to manufacture substances in the universe. The aliens consist of no more than humans in red boiler suits. There are a few shots of their unveiled reptilian faces but for almost the entire running time they are played by standard actors with no makeup. Indeed, the Visitors’ reptilian nature seemed to be forgotten about or glossed over in the subsequently mini-series and tv series (no doubt due to budgetary reasons), where they improbably preferred to remain in their human-like guises even when on their own ship, socialising or relaxing, not to mention having sex. The aliens also seem absurdly human in their behaviour – the gauche Willy (played by Robert Englund just before coming to fame as Freddy Krueger in the A Nightmare on Elm Street films) is played for comic maladroitness throughout, while Peter Nelson plays a Visitor soldier who engages in a standard teen romance with Blair Tefkin.

Like Independence Day and most other alien invasion films, we come to see that the invasion of Earth is only limited to the invasion of the United States. Indeed, despite a few scenes at the start of the aliens hovering over world cities, this is a worldwide alien invasion that does not even appear to move outside of the state of California. There is the oddly amusing scene – like where the brass band sent to greet the Visitor delegation plays the Star Wars theme music in lieu of their national anthem.

The mini-series finishes on a very open-ended conclusion. This was subsequently taken up by the even worse V: The Final Battle (1984). These two mini-series were followed by a tv series V (1984-5), usually known as V: The Series (but only as V on the opening credits), which lasted for 19 episodes and was cancelled at the end of its first season. The series was subsequently continued in a series of novelisations and a DC Comics comic-book series. The show was later revived with the modernised tv series V (2009-11).