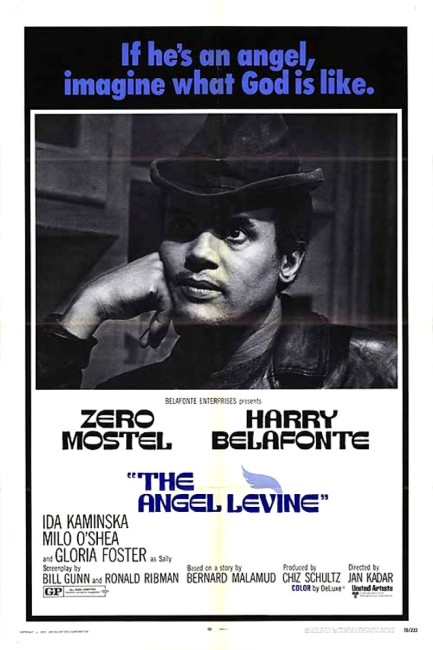 Elderly Jew Morris Mishkin is certain that God hates him because of the suffering he has experienced in life. He finds a Black man in his kitchen who introduces himself as Alexander Levine and insists that he has been sent back from the dead to help Mishkin. As Mishkin tries to decide whether the frequently less-than-angelic Levine is genuine or still the petty conman he was in mortal life, Levine proceeds to teach him a series of hard, sharp lessons.

The Angel Levine is a largely forgotten obscurity from the 1970s. It was the English-language debut of Slovak director Jan Kadar who had made the internationally acclaimed The Shop on Main Street (1965) in his native Czechoslovakia before fleeing and taking refuge in the US following the Soviet invasion in 1968. The Angel Levine was the first English-language film that Kadar made in the United States and he would make a handful of others before his death in 1979.

The film was adapted from a short story by Bernard Malamud, the Jewish-American literary author whose works have been adapted into a number of other films with the likes of The Fixer (1968), The Natural (1984), The Assistant (1997) and The Tenants (2005). One of the more interesting names is that of scriptwriter Bill Gunn, one of the few African-Americans of the era was not only writing but also directing his own films, most notably the vampire film Ganja & Hess (1973).

On the face of it, The Angel Levine is not that different from the old angelic intervention light fantasies of the 1940s such as Here Comes Mr Jordan (1941), An Angel on My Shoulder (1946), Angels in the Outfield (1951). What is unusual is the approach, which makes the sentiments much more hare-edged and embittered. Even more interestingly it portrays the angelic figure – who you could just as easily compare to The Bishop’s Wife (1947) – with an ambiguity that suggests equally as much he could be only a street-smart hustler, as though to say that the substance of what one believes about Levine rest purely in faith.

Jan Kadar and lead actor Zero Mostel play with a sense of Jewish fatalism, which lends to a nicely downbeat realism to the exercise. Ultimately though, Jan Kadar’s experimental tricks – flipping back and forward between black-and-white and colour, a zoom-happy lens and a genuinely weird score filled with monotonous atonal rhythms and wails – weakens the narrative to the point of inconsequentiality. A scene like where Levine steals the drug, shot as a bizarre chaotic mime to an even weirder score, leaves one wondering exactly what sort of film it is that one has wandered into. In the end, one is not even sure what all the ambiguity about whether Levine is mortal or divine is ultimately meant to mean – or for that matter if one could care less.

Among the cast Zero Mostel’s wry, fatalistic performance succeeds in being occasionally moving, and the same can be said for Ida Kaminska as his wife Fanny. Gloria Foster is exceptional as the cynical, streetwise Sally – one can see the suspicious distrust in her eyes and yet the willingness at wanting to believe Levine. Harry Belafonte’s bland performance as Levine is the only weak card among the deck, his weakly pained sincerity failing to hit that note of certainty that would have engendered the role to us.