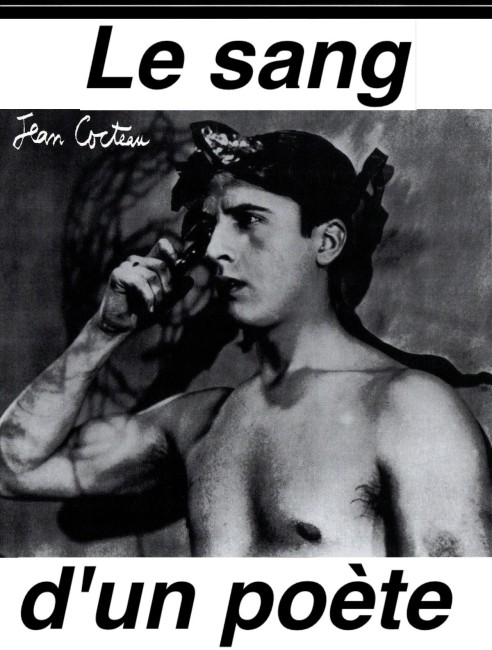 In the time it takes a smokestack to fall, four episodes occur:– An artist finds that the mouth he has drawn on a portrait has attached itself to his hand. The artist falls through a mirror and emerges in a hotel built at peculiar angles where he sees various strange sights through the keyholes of doors as he tries to traverse the hall. Boys engage in a snowball fight. A female statue and a man engage in a card game, a guardian angel absorbs the body of a boy beneath the table, the man shoots himself in the head because he is a cheat and the statue returns to a life of immortality.

The Blood of a Poet was the first film of Jean Cocteau (1889-1963). Cocteau had already become an acclaimed poet, playwright and artist in his teens. He would go onto become one of the most celebrated of the post-War French directors. Cocteau made a number of noted fantasy films including Beauty and the Beast (1946), Orpheus (1950) and The Testament of Orpheus (1960).

Jean Cocteau emerged at the same time as another Parisian-based surrealist-turned-filmmaker – Luis Buñuel, who around the same period made the famous shorts Un Chien Andalou (1928) and L’Age d’Or (1930). Both Jean Cocteau and Luis Buñuel were doing very similar things in the same time and place. They created some the earliest works of experimental surrealism on film. Both made short films that contain a progression of surreal juxtapositions of imagery without any narrative connection.

Both are also quite different directors – Buñuel is an iconoclast and is constantly trying to agitate with shock and blasphemous imagery, whereas Jean Cocteau is more laidback and intellectualised. His images are much more languid and dreamy, even covertly sexualised (Cocteau was gay and the first segment of The Blood of a Poet at least takes an inordinate delight in having a young man walking about bare-chested). I have always maintained (a minority opinion) that Luis Buñuel was overrated – his juxtapositions rarely seem more sophisticated than sub-Monty Python gags. The same criticisms can also be made of Jean Cocteau here. The Blood of a Poet is unsophisticated stylistically – the score, for example, is often crudely inappropriate.

There are certainly times though when Cocteau’s juxtapositions are striking. The first segment with the hero getting a painted mouth stuck on his hand that refuses to come off could almost be made to function as a horror film with a slightly different approach. Or the second episode with the man falling toward a mirror and the mirror (in a simple cut-frame shot) turning into a pool of water as he hits it; his passage down a hallway that has to be traversed at odd angles; and amusing vignettes like the recalcitrant child who eludes a whipping from a parent by crawling around the walls and roof of a hotel room.

Set alongside these, the other two episodes are dull. The one with the boy throwing snowballs is forgettably slight. The final episode involving a card game where one player shoots himself in the head, a dead body lying under the table, a Black angel, a woman who turns into a statue and talks about the boredom of immortality is unfathomably dull.