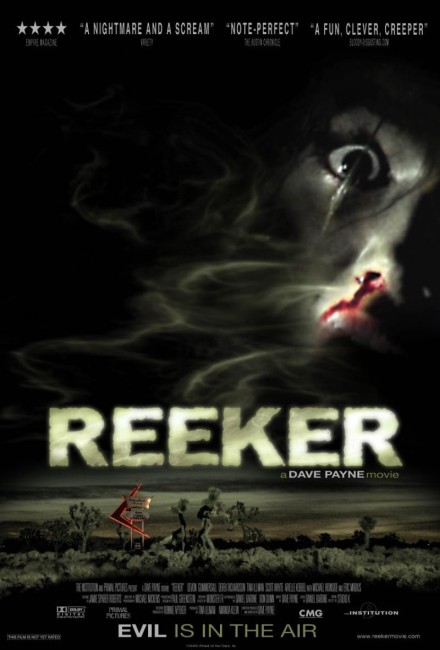 Trip joins a group of friends heading to a concert in the desert. He goes to buy some drugs from the dealer Radford for the occasion. While Radford is not looking, Trip takes the opportunity to steal his entire stash of pills. Radford is incensed when he finds out and calls Trip to say he is coming after him. When Trip offers the drugs to the others in the car, the driver Gretchen demands he get out. They turn around to drop him off at a roadside diner/motel only to find the car is out of gas, the place is deserted and their cellphones have no signal. As the group set up camp at the motel, a creature that is accompanied by an overpowering smell comes killing them one by one.

While Dave Payne’s resume did little to give one high expectations of Reeker, it quickly began to impress. We are thrown right into it from the opening where a family driving along the highway abruptly have a deer splatter across the windshield causing them to crash. The confusion of the aftermath is filled with images of the family dog dragging itself along with a wound to its hind quarters and the husband (Paul Greenstein) appearing with half his head missing.

Having made us sit up in our seats in these opening moments, Payne then introduces a group of characters that are certainly not your usual bunch of cliche teenagers – there’s Scott Whyte who has just decided to steal drug dealer Eric Mabius’s stash and has a pissed Mabius deciding to head after him with the promise of wreaking vengeance if he doesn’t get it back, only for Whyte to be dumped in the middle of nowhere after he produces the drugs in the car; and Devon Gummersall as a blind member of the group, whom Whyte thinks is faking it to much initial insensitivity.

Once he has us at the roadside stop diner location, Payne is constantly teasing us with way out scenes – blind Devon Gummersall entering a room in which a woman has been gagged and chained up but he seeing nothing and walking out; Scott Whyte opening a dumpster bin to have the half-severed torso of a truck driver crawl out. Lurking in the background is the constant threat of Eric Mabius’s pursuing drug dealer who has a habit of appearing to Tina Illman in bloodied visions.

Once people start being despatched, the film leaps into some real WTF territory – the image of Arielle Kebbel sitting on an outhouse toilet and a hand reaching up from inside, followed by a whirring mechanical device that drags her in; or when Derek Richardson drops his shoe down the side of the bed and a mechanical device appears out from underneath to snatch it. One of the appealing things about the film is the creature itself, which is clearly supernatural in nature, accompanied by an odious smell but is also seen wearing a gas mask and producing mechanical devices, suggesting something science-fictional.

Where the film falters after a fine build-up is in the twist ending that pulls back to explain everything that is going on. [PLOT SPOILERS]. Here Payne opts for a familiar deathdream twist where it is explained that everything that occurred is people experiencing hallucinations as they hover between death and/or being saved after a vehicular pile-up on the highway. This is something this author has named the deathdream ending. This was created with An Occurrence at Owl Creek Bridge (1961) in which a man miraculously escapes the hangman’s noose and runs home to his family, only for his neck to snap as he arrives and it be revealed that all of this was a dream in his dying moments.

Dave Payne later returned with a sequel No Man’s Land: Rise of the Reeker (2008).