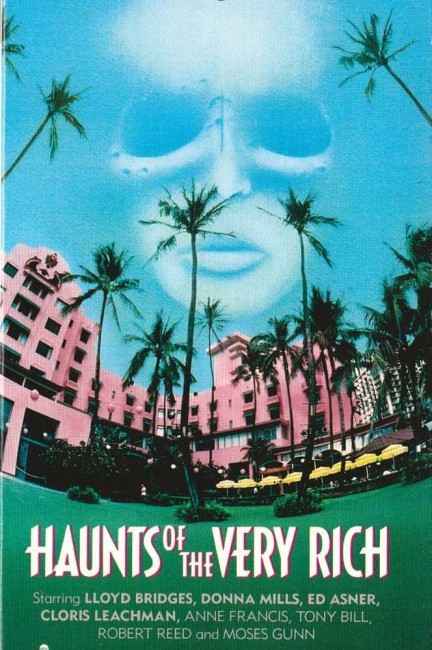 A group of people are on a flight to the mystery resort Portal of Eden, all except for Al Hunsicker who thought he was going to Texas for a business meeting. They land at their destination, a palatial resort, and are shown their rooms by the host Seacrist. There is a storm overnight and in the morning, Seacrist informs them that communications are out. The runway for their return flight is blocked but effort is being made to clear it. The situation becomes worse as the staff depart after the death of one of their number and the guests are left on their own with scanty supplies of food and water.

Paul Wendkos (1925-2009) is a genre director who I have always maintained never fully received his due. His one moment of pure stylishness was the occult film The Mephisto Waltz (1971). Wendkos made several other theatrical films, little of note, except perhaps for the hit of the teen film Gidget (1965) and two of its sequels. Almost all Wendkos’s work was in television in a five-decade career beginning in the 1950s and covering episodes of many classic tv series such as The Untouchables (1959-63), Dr Kildare (1961-5), I Spy (1965-8) and The Invaders (1967-8). He has made a sizeable number of tv films, including the classic The Brotherhood of the Bell (1970) and several genre offerings such as Fear No Evil (1969) about a ghostbusting duo, The Legend of Lizzie Borden (1974), the occult film Good Against Evil (1977), a remake of The Bad Seed (1985) and the ghost story From the Dead of Night (1989).

All of that said, Haunts of the Very Rich is neither an unsung entry from the 1970s Golden Age nor one of Paul Wendkos’s lost classics. It never ends up being particularly interesting. There are a series of vague happenings – a storm; a snake found in a bed; one of the staff collapsing dead, the rest of the staff quitting; a broken radio that is able to receive but not transmit. The group are abandoned at the resort with dwindling food and water supplies and no hired help, while there seem endless reasons preventing them from being able to leave. This produces mild tension but you feel like the film could have pushed these things and put the screws on characters a whole lot more than it does. The film certainly lets down on the ‘haunts’ part of the title – this leads you to at the very least expect a ghost story and there is nothing that can be even remotely considered spooky.

The film’s main twist is that it is a deathdream fantasy – the term this site uses for films where a series of anomalous happenings are revealed to be occurring because the character(s) were dead all along. (See Deathdream Endings). The IMDB claims that the film is a remake of Outward Bound (1930), later remade as Between Two Worlds (1944), but this is not true. There is a general similarity – Outward Bound is about seven passengers on a cruise liner before the realisation they are dead; this has seven people arriving at a holiday resort and the same ending. More crucially, Sutton Vane’s original 1923 play, which was the basis of Outward Bound, is not credited anywhere here, which is usually what would be required to call something a remake. The deathdream has a long cinematic lineage to the point it has become a cliche these days in films ranging from An Occurrence at Owl Creek Bridge (1961) to The Sixth Sense (1999). I don’t think Haunts of the Very Rich does a particularly good job of telling such a story. It is never clear what is happening, while the end the film reaches is frustratingly vague and unresolved.

Haunts of the Very Rich interestingly prefigures something of the hit series Fantasy Island (1977-94). There is the same set up involving a party arriving at a luxurious tropical resort. There is even the figure of Moses Gunn as the mysterious guide who greets them wearing a white suit just like Ricardo Montalban. It could well be that this is where Aaron Spelling and co found the inspiration for Fantasy Island. I kept also thinking forward to the later hit series Lost (2004-10) and its group of people trapped on an island where mysterious things were constantly happening while both shows end with a not dissimilar twist ending.

Certainly, the film has an impressive cast line-up including Lloyd Bridges, Jeff’s father, known for the tv series Sea Hunt (1958-61) and a few years later Airplane/Flying High (1980); Edward Asner then known for Mary Tyler Moore (1970-7) and a few years spun later off with his own show Lou Grant (1977-82); Cloris Leachman, another Mary Tyler Moore alumni who also had her own spinoff show with Phyllis (1975-7); Anne Francis, Altaira from Forbidden Planet (1956); and Donna Mills from Play Misty for Me (1971) and later a regular on Knots Landing (1979-93).