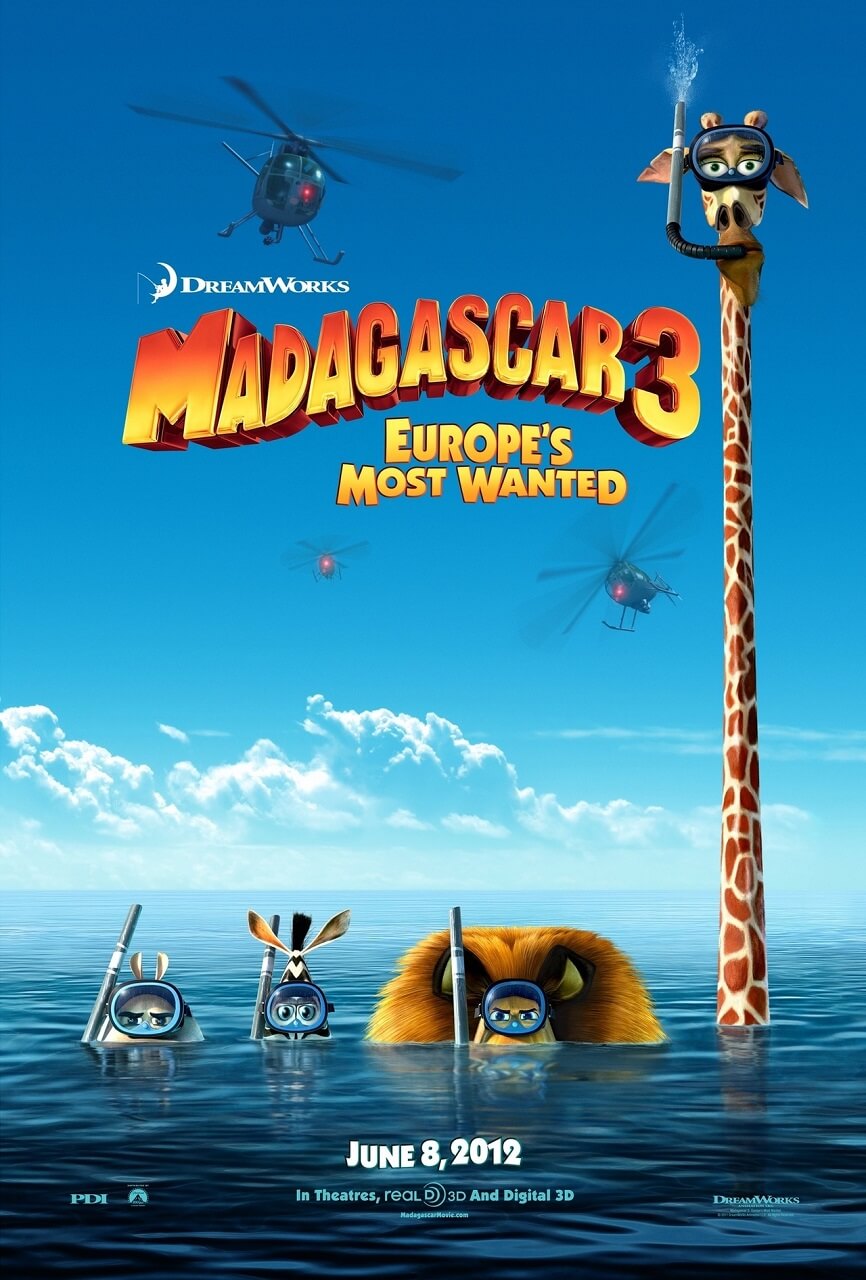 In Africa, Alex feels that he misses the New York City zoo and so the animals decide they want to return home. The penguins have departed to go gambling in Monte Carlo and Alex, Marty, Melman, Gloria and King Julien head there to find them. However, they cause a panic when they invade the casino. Animal control is called in and its captain Chantel Dubois becomes obsessed with capturing Alex so that she can add a lion to her collection of mounted heads. Fleeing pursuit, they come across a train car filled with animals from a circus where they quickly claim to be circus animals too to gain shelter. The penguins use their gambling proceeds to buy the circus. However, when they arrive in Rome, they discover that the circus is failing and the animals are poorly trained. Alex comes up with a plan to create an amazing new series of acts to revive the circus’s fortune and land them the big contract that will take them back to America.

This is the third in the series of animated films from DreamWorks Animation. The series began with the likeable Madagascar (2005), which became one of their biggest hits next to the Shrek franchise. This was then continued with a sequel Madagascar: Escape 2 Africa (2008), which is probably the series peak. All of the regular voice actors are back here for a third time, as are directors Eric Darnell and Tom McGrath, who handle the chores with another DreamWorks animator Conrad Vernon, co-director of Shrek 2 (2004), Monsters vs Aliens (2009), Sausage Party (2016) and The Addams Family (2019). The surprise name on the script is that of Noah Baumbach, a regular writer for no less than Wes Anderson and director of his own with the acclaimed The Squid and the Whale (2005) and Margot at the Wedding (2007).

That said, by the time the posters and lobby stands went out for Madagascar 3: Europe’s Most Wanted, one felt a distinct lack of enthusiasm for the film. The Madagascar series felt like it had a cute one-off premise the first time around – zoo animals want to travel back to Africa but discover the wild is not what they imagine it to be – that feels distinctly strained when it comes to trying to find new things for the characters to do with each of the sequels. As here, when both Alex and King Julien get romantic interests, you keep asking yourself – “wait a minute, wasn’t that a plot point in the second film?” – and struggle to remember who had such a story arc before.

The centre of the stage is inherited by a group of new characters – Bryan Cranston as a proud Russian-accented tiger who fears returning to his act; Jessica Chastain as a sexy leopard that Alex is attracted to; and Sophia, a mentally disturbed bear on a bicycle that King Julien develops moon eyes for. On the human side, the show is largely taken over by the obsessive Frances McDormand-voiced animal control officer. (The only complaint is that she is meant to come from Monte Carlo, yet the film is constantly outfitting and surrounding her with cliches of French culture when in fact Monte Carlo is located in the principality of Monaco).

I entered into Madagascar 3: Europe’s Most Wanted with little enthusiasm. Invariably though, the film began to work on you – or maybe it was just the sheer vibrance of the colour palette it offers up this time that lifted one’s spirits. The directors whip up some entertaining action sequences – especially one careening through the streets of Monte Carlo with the penguins driving an SUV pursued by Captain Dubois, a sequence that ends up with everybody flying through the air hanging from the penguins’ makeshift plane. The circus exploits – and especially the visual antics of King Julien and Sophia the Bear on various motorcycles around the streets of Rome – come with an immense energy that is hard to dislike.

The film is also released in the ubiquitous 3D process, which almost every animated film of the moment is (the first of the Madagascar films to do so), at which you cannot deny the film has great fun poking giraffe snouts and firing people from cannons out of the screen. This is one film where even the artistic design of the streets comes in such a way as to maximise the way they look in 3D. For such a low expectation film, you cannot deny that Madagascar 3 leaves you going away with a smile.

Subsequent to this, the penguins were spun off in their own film Penguins of Madagascar (2014).