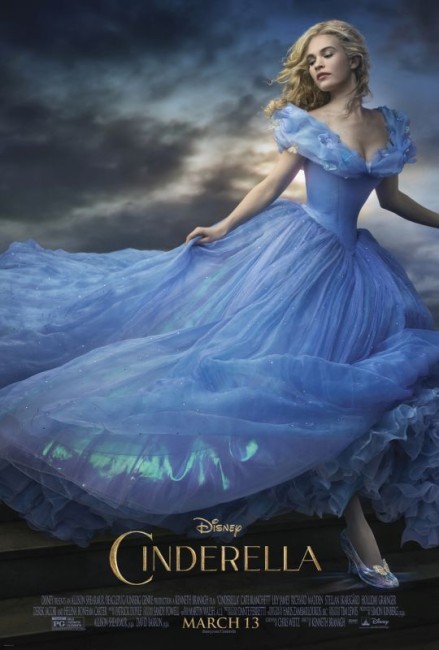 Young Ella grows up with loving parents and is shattered when her mother dies. As Ella grows into adulthood, her father takes a new wife in Lady Tremaine who moves into the house with her two self-absorbed daughters Drizella and Anastasia. Ella’s father then dies of an illness while away on a business trip. Lady Tremaine can only think of how this means financial ruin for her. The servants are dismissed and Ella is forced to act as domestic help. She is banished to the attic where her only friends are the mice and animals she talks to. The sisters nickname her Cinderella because of the ashes from the fireplace smudged on her face. One day, Ella is in the woods and meets the prince, thinking him merely a servant at the palace. They are both charmed by one another and he heeds her request to spare the deer he and his men hunt. Captivated by her, he holds a ball to find a wife, asking all in the land to come in the hope that she will be there. However, Lady Tremaine and the stepsisters, who intend to snag the prince for themselves, refuse to let Ella go and tear up the dress she has made for herself. Left behind, Ella is surprised by the appearance of her Fairy Godmother who transforms a pumpkin into a coach and Ella’s mice and lizard friends into attendants. Ella makes a stunning entrance to the ball and charms the prince. However, the requirement of the spell is that she leave by midnight and she flees, leaving behind only one of her glass slippers. The prince then sets out to search the land to find who will fit the slipper. However, Lady Tremaine is determined to prevent this and locks Ella away.

This version has been placed in the hands of Kenneth Branagh. Born in Ireland, Branagh rose through the ranks of the Royal Shakespeare Company, making his name as an actor on British television during the 1980s and then exploding out onto cinema screens with his dynamic adaptation of William Shakespeare’s Henry V (1989), which saw him nominated for Oscars as both Best Director and Best Actor in his directorial debut. Branagh has been a frontline name as an actor since then and has made a number of films as a director, returning to Shakespeare several times with the likes of Much Ado About Nothing (2003), Hamlet (1996), Love’s Labor Lost (2000) and As You Like It (2006). He has directed a number of other works including the reincarnation film Dead Again (1991), his own version of Mary Shelley’s Frankenstein (1994), a modernised adaptation of the Mozart opera The Magic Flute (2006), the remake of Sleuth (2007), the Marvel Comics superhero film Thor (2011), the reboot of the Tom Clancy spy series Jack Ryan: Shadow Recruit (2014), the remake of Murder on the Orient Express (2017) and the Young Adult adaptation Artemis Fowl (2020).

The surprising name on the script is that of Chris Weitz who, along with his older brother Paul, was co-writer of Antz (1998) and went onto the enormously successful American Pie (1999) directed by Paul. As a directing team, the Weitz’s made Down to Earth (2001) and About a Boy (2002), as well as co-wrote The Nutty Professor II: The Klumps (2000). Chris made his solo directorial debut with the fantasy film The Golden Compass (2007) and then went onto the Twilight sequel New Moon (2009).

As the dark fantasy fairytale films of the 2010s made their way through the classics, it was inevitable that Cinderella would get adapted. It, after all, holds the record as the one story that has been adapted to the screen the greatest number of times. The IMDB tells me that the character of Cinderella has been played by 208 different actresses. These run the gamut from two different versions from Georges Melies back in the 1890s/1900s, a 1914 version with Mary Pickford, The Glass Slipper (1955) with Leslie Caron, the musical The Slipper and the Rose (1976) with Richard Chamberlain, to modernised updatings like If the Shoe Fits (1991), A Cinderella Story (2004) and After the Ball (2015), the sex-reversed Jerry Lewis comedy Cinderfella (1960), the wittily deconstructed EverAfter (1998) and the awful comic take Ella Enchanted (2004), as well as Cinderella turning up as a character in fairytale crossovers such as The 10th Kingdom (2000), the Shrek films, Once Upon a Time and Into the Woods. There has even been Cinderella Moon (2010), a version that takes place in China, and adult versions like Grimm’s Fairy Tales for Adults (1970), Cinderella (1977) and Cinderella 2000 (1977). The most celebrated version amongst these is probably the Disney version Cinderella (1950), which I would argue is not one of their greater classics, but has attained that position in many people’s minds.

There is a certain problem seeing Cinderella conducted as a dark adult fairytale. Many of the other tales lend themselves to it – Beauty and the Beast is a dark romance, Red Riding Hood readily lends itself to being a werewolf story, Hansel and Gretel with the witch trying to eat children is a horror story waiting to be told, Snow White with its sinister stepmother attempting murder and sorcery is another.

On the other hand, Cinderella is very much a feelgood tale – its arc is that of the downtrodden girl whose purity of heart triumphs over mean-spiritedness and has riches and the hand of the prince delivered to her doorstep. It is not a dark romance, nor filled with horror elements, it is a tale that offers a sweetly uplifting belief in goodness, pure-heartedness and true love winning out. There is very little in it you can deconstruct or turn on its head without severely disrupting the central arc of the story.

That is why Kenneth Branagh and Chris Weitz stay with the basics. They tell the story is surprisingly traditional ways, doing almost nothing to change any of the elements or show them with a darker spin. Indeed, it becomes a stretch to classify Cinderella among the run of dark adult fairytales. The surprise is that Branagh and Weitz conduct this version as a remake of the 1950 Disney version. This leaves Cinderella sitting among the spate of live-action remakes of Disney properties that we have had in the last few years – see the likes of The Jungle Book (1994), 101 Dalmatians (1996) and the subsequent The Jungle Book (2016), Pete’s Dragon (2016), Beauty and the Beast (2017), Mary Poppins Returns (2018), Aladdin (2019), Dumbo (2019), Lady and the Tramp (2019), The Lion King (2019), The Little Mermaid (2020) and Mulan (2020).

The most obvious influence is of course the live-action Maleficent, which was not another version of Sleeping Beauty so much as a reinterpretation of the Disney version Sleeping Beauty (1959). The plot here closely adheres to the 1950 film – retaining the names given to the two stepsisters; elements like Cinderella talking to the animals that are later transformed into her attendants by the Fairy Godmother; and the climactic scenes where she is locked away in the attic by the Wicked Stepmother so as to prevent her from being found during the Prince’s quest for the wearer of the glass slipper. The version even retains the use of the song Bippity-Boppity-Boo.

The problem that Cinderella has is that it is such a well-told tale that every aspect of the story is familiar to any member of the audience over the age of ten. The experience of watching is akin to sitting through a performance of a Shakespearean play where you can recite the lines by rote. There is a sense of familiarity to almost every aspect of the film as the script strikes off beat after beat without varying from the standard. The question then is what can a new version of the story offer to an audience that is different to any other telling in the past. The answer would seem to lie in looking at Kenneth Branagh’s Shakespeare adaptations – there he was working with stories that were familiar through centuries-repeated retellings but managed to enliven them over previous film versions by taking them away from being merely filmed stage plays and giving them glorious cinematic life.

Similarly here, Branagh gives us a beautifully cinematic Cinderella. The scenes in the father’s house are exquisitely dressed and costumed – the camera’s wanderings through each of the rooms are like mini-masterpieces of English country home interior decoration. When it comes to the palace scenes, Branagh loves the pageantry of the guards lined up in uniform and the courtiers in formal dress, or gives us romantic interludes in beautifully laid-out gardens. The ball becomes a wonderful cinematic piece set up solely for Lily James’s resplendent entrance. The result is an adaptation that moves well, looks good and stirs the emotions in all the places it should. It doesn’t have quite enough of these elements to be a great film but by the same token is by no means an unenjoyable airing of the familiar either.

Amongst the cast, Lily James has a plain beauty as Cinderella. The film outfits her with costuming, hair and makeup so that the part comes to life. On the other hand, she never feels like someone filling the part in the way that makes the romance soar, the emotions come off the screen, or you cheer on her fire and spunk. As the Wicked Stepmother, Cate Blanchett takes the opportunity to chew the scenery in grand fashion – in one of its more original touches, the script even outfits her with intriguing pieces of back motivation. The one who owns the show however is Branagh’s former girlfriend Helena Bonham Carter who gives an appealingly quirky and eccentric airing of the role of the Fairy Godmother in the way only she can.