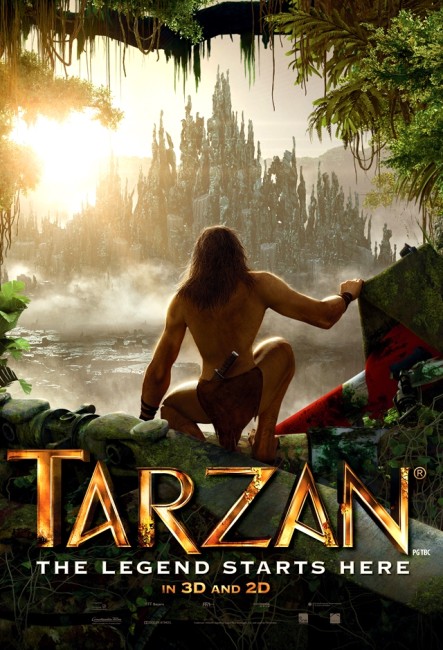 John Greystoke, the head of Greystoke Energies, is in Africa with his family, determined to trace the location of a prehistoric meteor that he believes contains a great source of energy. After finding it, the shard of rock he takes causes the meteorite to go out of balance, wreaking havoc with the weather. In the resulting storm, Greystoke’s helicopter crashes. The only survivor is Greystoke’s young son J.J. who prefers to be called Tarzan. He is found and adopted by Kala, the mother of the greyback apes that live in the area, who is mourning the loss of her own child. Tarzan grows up among the apes. One day, the expedition headed by the guide Porter comes into the area. Tarzan is enchanted by Porter’s daughter Jane and saves her from an animal attack. Fourteen years later, one of the apes accidentally activates a tracker in the wreck of the helicopter. William Clayton, the ruthless CEO to Greystoke Energies, comes to Africa to trace the signal, using the pretext of one of Jane’s conservation expeditions as cover. There Tarzan and Jane are reunited where she shows him how to speak and helps him rediscover his heritage.

Tarzan, the original creation of adventure writer Edgar Rice Burroughs, has become one of the most enduring and iconic cinematic characters. Tarzan first appeared in Burroughs’ novel Tarzan of the Apes (1912) and a subsequent twenty-one books. The Tarzan cinematic legacy – which is where the character’s real popularity began – started with the silent Tarzan of the Apes (1918) starring Elmo Lincoln and five other silent films. The most popular incarnation came with Tarzan the Ape Man (1932) starring Johnny Weissmuller who appeared in a further thirteen Tarzan films throughout the 1930s and 40s. It is here that the pidgin English, the cute animal sidekicks, the jungle treehut and the “me Tarzan, You Jane” jokes begin. There have been numerous other Tarzan sequels, spinoffs and parodies since. (See bottom of page for the other direct adaptations of the Edgar Rice Burroughs book).

The character of Tarzan was always a product of the late colonial period where Africa was still a mysterious and (in parts) unexplored region, where it was seen that the white men held a natural superiority to the ‘uncivilised’ natives. Tarzan embodied the myth of the Noble Savage – a white man caught between living wild and unfettered by civilisation but equally with the superior insight that his birthright brings. The popularity of Tarzan has fallen away since the 1970s where the continent became less unexplored than one fractured by poverty and mad dictators, where the image of the Great White Hunter fell into disrepute with the awareness of endangered species and more recently environmental concerns. Tarzan has had some difficulty trying to find renewed cinematic interest amid this. (Here, for instance, Jane becomes a passionate advocate for endangered species, while the evil Clayton is associated with ‘industry’. This also becomes the first Tarzan film to toss in the phrase ‘global warming’).

This new version of Tarzan comes from a group of German animators. Director Reinhard Klooss had been a producer of various German films since the early 1990s and had enjoyed some success earlier with the animated film Impy’s Island (2006) and its two sequels. Klooss shot the film in the motion capture process where it was performed by actors in front of a greenscreen in a studio and then transformed into animation in the computers. Despite lavishing a more than reasonable budget on it, Tarzan did little box-office around the world and was critically savaged.

Your hopes sink from the opening moments, which offer up a modernised version of the Tarzan origin story. Edgar Rice Burroughs would probably be turning in his grave at the thought of Tarzan’s family now being Americans and the heads of ‘Greystoke Energy’ and the subsequent scene where we see Tarzan not as an infant but a young kid who is playing at being someone called Tarzan. Nevertheless, thereafter, from about the point when the Claytons’ shipwreck gets rewritten as a helicopter crash, the film starts to conduct a largely faithful retelling of the Tarzan origin story and the film slots into place with ease.

What we have soon becomes a worthy successor to the Disney animated version Tarzan (1999). It is, if you like, what the Disney film might have emerged as with the animation a decade on – the Disney film came out just when computer animation was making its impact but was still substantially hand-animated. Here the film is completely CGI animated where the animators give us backgrounds and jungle foliage that has an extraordinary richness and vibrance, while the camera moves around to take in the landscape in 3D splendour and the action scenes are kinetically exciting. The quality of animation is frequently quite beautiful. Moreover, the mocap route allows the apes and characters to move with much more naturalistic and accurate detail – indeed, in terms of its more realistic apes, what we have feels sometimes more like an animated version of Greystoke: The Legend of Tarzan, Lord of the Apes (1984) than a variant on the Disney film.

This film could perhaps be considered an unofficial remake of the Disney film rather than another version of the original Edgar Rice Burroughs book. It copies the Disney film in terms of appropriating the Greystoke family name of Clayton for the new character of a villain who led the expedition into the jungle to capture the apes in the 1999 film and here to find the energy source, in both cases readily employing ruthless methods until he comes up against Tarzan.

Perhaps the biggest complaint one might have is the need to add to the plot a magic all-purpose space rock as a fantasy McGuffin that drives the quest by the Westerners and produces random geological/weather upsets at semi-regular intervals (not to mention has the strange property of needing to be recombined when one of its pieces is chipped off – a story aspect that is not explored enough). Edgar Rice Burroughs never saw the need to use a device like this and his story (and all the other film versions) worked perfectly well without it.

Other adaptations of the Edgar Rice Burroughs books include:- Tarzan of the Apes (1918), the silent Elmo Lincoln version; Tarzan the Ape Man (1932), the classic version with Johnny Weissmuller who went onto appear in a further eleven Tarzan films; Tarzan the Ape Man (1959) starring Denny Miller; Tarzan the Ape Man (1981), a softcore version featuring Bo Derek and with Miles O’Keeffe as Tarzan, which is a direct remake of this film; Greystoke: The Legend of Tarzan, Lord of the Apes (1984), a lavish version starring Christopher Lambert that returns to the original novel; and the Disney animated version Tarzan (1999).