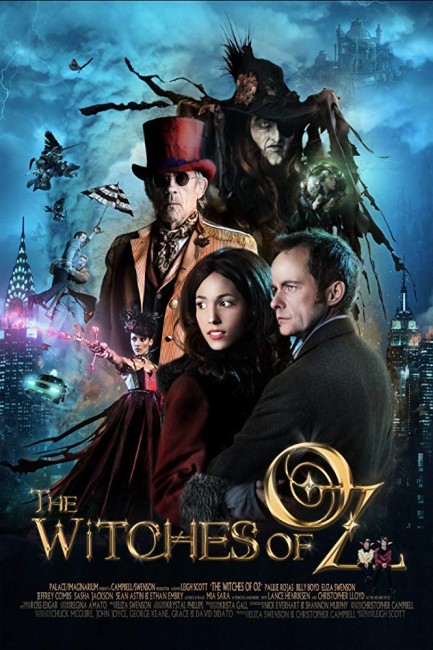 Living in Kansas on the farm of her Uncle Henry, Dorothy Gale has written a series of books about the magical land of Oz. After entering the books into a writing competition, Dorothy is signed by top agent Billie Westbrook and brought to New York City where she immediately thrown into the high-life as Billie prepares to sell the books for top money. Strange things begin to occur as magical creatures appear. Dorothy discovers the past she never knew – that she was in fact born in 1899 before being whisked away to Oz, which is a real place, via an inter-dimensional portal. In Oz, the Wizard drew up an agreement with the Wicked Witch of the West concerning the all-powerful book that contains a single word that is capable of giving dominion over all realms. This was lost and Dorothy developed amnesia before returning to Kansas. Now the Wicked Witch, who has taken the form of Billie, and is accompanied by the other witches of Oz, seeks to obtain the hidden components of the key that unlocks the book. As Dorothy struggles to prevent this, she realises that her faithful companions have all taken human guise on Earth too.

The Wizard of Oz (1939) is a classic of modern American cinema. Its classic stature has led to an enormous number of sequels, spinoffs, parodies and modernisations, not to mention quoting of aspects in numerous films. Direct spinoffs and reworkings have ranged all the way from animated sequels like Journey Back to Oz (1974) and Legends of Oz: Dororthy’s Return (2014), the live-action Return to Oz (1985) to Sam Raimi’s prequel Oz: The Great and Powerful (2013), not to mention reworkings that range from The Wiz (1978) to The Muppets’ Wizard of Oz (2005), Tin Man (2007) and Emerald City (2017).

The Witches of Oz is a modern sequel to the original – perhaps one should say ‘sequel-slash-modernisation’ as it seems to be both trying to tell a slightly different story to the original as the same time as retelling many of the aspects in present-day surroundings. Thus Dorothy is now a writer who travels from smalltown Kansas to New York City where she encounters various equivalents of the companions and villains. (This reminds something of what The Wiz attempted to do in terms of transliterating Oz to a fantasy version of New York City).

Unlike most other Oz films, you get the impression that the writers here at least studied some of L. Frank Baum’s sequels (or at a minimum watched Return to Oz) and tried to incorporate characters outside of the 1939 film such as Mombi, the Nome King and a brief appearance of Tik Tok, as well as at least one original Baum character who has not appeared on the screen before – Princess Langwidere. (Sean Astin and Ethan Embry as the miniature creatures known as Muckadoos are original to the film – the only reference to Muckadoos I can find online is a colloquial term for a woolly-headed person of leftist sympathies where you get the impression that the mini-series is trying to make some political comment, which is at least the sort of thing Baum would have done).

There is also the idea of Dorothy originally being a lost princess of Oz that doesn’t come from Baum but was first introduced in the silent film version of the book Wizard of Oz (1925). The title The Witches of Oz seems to have been taken from the hit Broadway musical Wicked (2003), which originally premiered under the title Wicked: The Untold Story of the Witches of Oz.

It is this shabby indifference of Leigh Scott’s direction, the cheapness of the videography and the tattiness of CGI effects that rob The Witches of Oz of any magic within minutes of opening. (One should point out that Scott’s version also robs Baum of any allegory – here The Wizard is a standard fantasy wizard not a shabby confidence man and there is nothing of the companions’ quest for virtues).

I quickly found the mini-series tedious. Everybody in New York City is a self-absorbed one-dimensional caricature – and we are subjected to the better part of an hour of these characters before the main story starts to kick in. This is a story that could easily have filled a standard 90-minute film (it was later – see below) but has been tediously padded to fill a 180-minute slot for a four-hour mini-series. The second half climaxes on a battle between Dorothy and the witches in New York City where Scott’s cheapness and lack of magic manages to drag the show out far longer than it should be.

The one plus that such a cheap production does incredibly enough manage to pull off is some impressive casting, including genre regulars Lance Henriksen and Jeffrey Combs, Lord of the Rings veterans Billy Boyd and Sean Astin, Christopher Lloyd as The Wizard of Oz and Mia Sara as Princess Langwidere. In all cases, they are wasted. Combs, Lloyd and Sara, for instance, only get a handful of forgettable scenes mostly in flashback. The film is also crippled by the casting of Paulie Rojas as Dorothy who plays with all the look of a frightened novice who has frozen in front of the camera.

Leigh Scott later offered up a cut down feature-length film version of The Witches of Oz under the title Dorothy and the Witches of Oz (2012) featuring new and better visual effects. He has announced a further Oz film with the animated Yellow Brick Road.