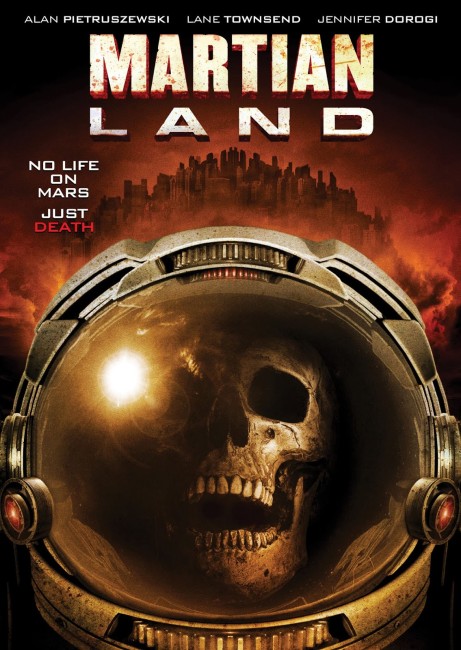 Earth has undergone environmental collapse. Scientists have led a movement to relocate on Mars in domed cities. However, Mars is now threatened by severe dust storms inadvertently caused by planetary engineering efforts. Controller Miranda Weller brings her ex-husband Pete Foster, one of the environmental scientists who decided to stay behind on Earth, to Mars to help them. As Foster arrives, the dust storms tear open the dome of one of the cities. Foster and Miranda’s daughter Ellie manages to find safety in a shelter. Foster proposes an ambitious untested plan to use electronic transmitters to neutralise the storm. Security head Allison Reiger argues that they should move the populace to the shelters en masse and all power be diverted to maintain these until the storm passes. Miranda insists that Foster and her current husband Neil be allowed three days to complete their plan. In the face of the storm, they set out on a perilous journey to tune the transmitters.

Martian Land was The Asylum’s response to Ridley Scott’s The Martian (2015) and was released four days after The Martian went into US general release. Unlike many of their other films, here The Asylum have not set out to replicate the survival story of the other film, which had Matt Damon as a single astronaut stranded on the Red Planet. Instead we have what could be The Martian a few decades on shortly after the planet has been colonised. There is somewhat of a similarity in premises – the start of The Martian has Matt Damon blown away by a sandstorm, whereas Martian Land has a massive sandstorm threaten the entire planet. The clearest point of comparison is a riff on one of the most quotable lines from The Martian, which featured prominently in the trailer, when Lane Townsend and Alan Pietruszewski are stranded in their vehicle and come out with “I don’t think we’re going to be able to science our way out of this one.”

The plot we have is essentially a variant on one of the regular disaster movies that The Asylum churns out – see the likes of 2012: Ice Age (2011), 100° Below 0 (2013), Airplane vs Volcano (2014), Asteroid vs Earth (2014) et al – a world-threatening disaster, a scientist with a radical untested theory that could save the day and the race against a countdown to activate it, opposition from the military who want to shut the experiment down and opt for their own solution despite the fact this will present far greater danger.

The Martian made a virtue of getting its science accurate and left you with the feeling that it had researched all of it down to the nth degree. You get the impression that the writer of Martian Land only made the most minimal effort to research the science on this one – for example, they have used standard desert scenes to stand in for the Martian surface but have also gone and shot on locations where the dunes are surrounded by brush, despite the fact that the surface of Mars does not support any plantlife. Most of The Asylum’s films are made on economy budgets – here they have simply shot many of the scenes that are supposedly set inside the domed cities using standard Earth street scenes. Somewhat better are other scenes later in the show, which make effective use of industrial plants and a tunnel system dug into desert rock.

Martian Land works somewhat better than most of The Asylum’s films. The plot taps some solid arcs – a father reconciling with his estranged family, battles against great odds, heroic sacrifice – and do these better than most Asylum films do. Also the special effects are somewhat better than the usual tatty CGI that we get in their productions. The cast are generally competent, apart from Jennifer Dorogi, an Asylum regular who is better known as a model and fashion expert, who gives the impression of being a girlfriend of one or other of the producers who was shoehorned into the film without any real concern for acting talent.