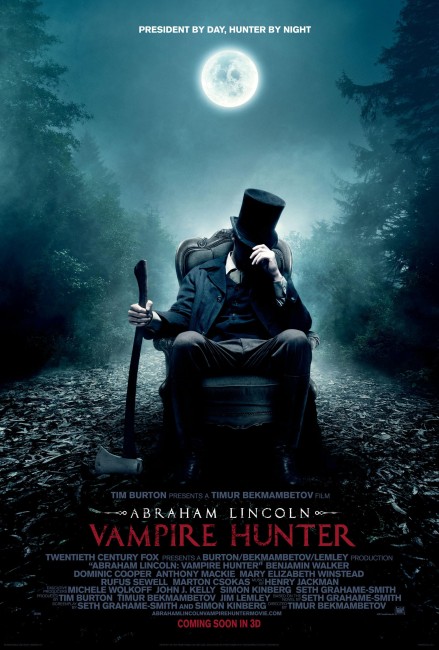 It is 1818. Abraham Lincoln is a nine-year old boy growing up in Indiana. He intervenes to stop slave owner Jack Barts beating a young Black boy. Abraham is then witness as Barts sneaks into their house at night and drinks the blood of Abraham’s mother in retaliation, causing her to die shortly afterwards. Nine years later, now a young man, Lincoln returns to kill Barts. His attempt fails but Lincoln is saved by Henry Sturgess who reveals that Barts is a vampire. Lincoln agrees to sign on as Sturgess’s apprentice and takes up a silver-coated axe to set about on a mission of eliminating all vampires. Lincoln moves to Springfield, where he gets a job in a general store and studies as a lawyer, while covertly hunting vampires. He becomes attracted to Mary Todd and later proposes to her. Lincoln also enters into politics. He takes a stance against slavery, seeing that the vampires in the country are using slaves as a ready source of blood. Lincoln’s political drive has him voted the President of the United States in 1861. He enacts the Emancipation Proclamation to free all slaves. However, this brings him to the attention of the vampires who pit the undead against the living in a civil war.

Seth Grahame-Smith created a publishing fad with his book Pride and Prejudice and Zombies (2009) wherein he took a classic literary work that was in public domain and mashed it up with zombies. This proved to be a surprise hit and created a spate of copycat works mashing up literary classics with genre elements that has so far included I, Scrooge: A Zombie Story for Christmas (2009), Sense and Sensibility and Sea Monsters (2009), Android Karenina (2010), Jane Slayre (2010), Little Women and Werewolves (2010), Little Vampire Women (2010), Mansfield Park and Mummies (2010), Robinson Crusoe (The Eerie Adventure of the Lycanthrope) (2010) and The Meowmorphosis (2011). Seth Grahame-Smith went onto conduct the historic mash-up with Abraham Lincoln, Vampire Hunter (2009) and there have been others pseudo-historic books in a similar vein such as Queen Victoria, Demon Hunter (2009), Paul is Undead: The British Zombie Invasion (2010), which blends The Beatles with zombies, and The Damned Highway: Fear and Loathing in Arkham (2011), mixing Hunter S. Thompson and H.P. Lovecraft. I enjoyed the cleverness of what Seth Grahame-Smith did with Abraham Lincoln, Vampire Hunter in taking the biographical details of the sixteenth US President and winding them around a rather funny horror narrative that offers alternative explanations for the crucial events in his life.

It was not long after this literary/horror mash-up fad hit bookstore shelves that it began to gain attention from filmmakers. Pride and Prejudice and Zombies was snapped up and spent several years in development before being made into a film with Pride and Prejudice and Zombies (2016). In the interim, Abraham Lincoln, Vampire Hunter was purchased as a property by the combined names of Tim Burton and Timur Bekmambetov. Not only that, Seth Grahame-Smith suddenly found himself propelled into the position of Tim Burton’s favourite new screenwriter, having co-written Burton’s Dark Shadows (2012) and is working on the script for a reported Beetlejuice 2, as well as other screenplays like The Lego Batman Movie (2017) and producing It (2017), The Lego Ninjago Movie (2017), Child’s Play (2019) and It: Chapter Two (2019), and was due to make his directorial debut with the film version of The Flash.

Timur Bekmambetov is a Russian born director (technically, from what is now Kazakhstan). Bekmambetov rose in the early 00s as a director of some of Roger Corman’s Russian-shot films, The Arena (2001) and Escape from Afghanistan (2002). What made Bekmambetov’s name was the amazing worldwide success of the Russian-shot horror epic Night Watch (2004), which suddenly had his name buzzing everywhere. Bekmambetov duly went onto to deliver a sequel Day Break (2006) and was then brought to Hollywood to make the visually amazing Wanted (2008) and subsequent to this the remake of Ben Hur (2016).

I have been impressed with Timur Bekmambetov’s work up until now. Night Watch and Wanted showed him as one of the most imaginative directors to jump aboard the new wave of fantastically stylised action patented by the Wachowskis. He has been the director most consistently pushing the frame in this genre – be it with Night Watch, a film made on a medium budget by a Hollywood outsider bursting with an eagerness to get a toehold into the mainstream, to the accomplished and way-out stylishness of Wanted. Bekmambetov has also taken a producing role on other works such as 9 (2009), Apollo 18 (2011), The Darkest Hour (2011), The Snow Queen (2012), Unfriended/Cybernatural (2014), Hardcore Henry (2015) and Unfriended: Dark Web (2018), which has shown him as a canny entrepreneur in the Hollywood industry. Unfortunately, one’s high hopes both of Bekmambetov as a director came crashing down when it comes to Abraham Lincoln, Vampire Hunter.

The essence of Seth Grahame-Smith’s book is an historical joke. It is a clever one that requires a certain appreciation of US history in order to get it. It is a work where Grahame-Smith has clearly sat down with a timeline of Abraham Lincoln’s life and mapped out every incident – from personal details like the death of his mother, his fiancee and son to major historical events such as the Emancipation Proclamation and Battle of Gettysburg, even the assassination by John Wilkes Booth – and rewrote them as a secret alternate history that involved vampires. The book was written as a series of diary entries and even came with photographs from the era that had been touched up to illustrate its’ mock thesis. It was a joke where we were invited to enjoy the absurdity of the title concept being played in straight-faced seriousness.

When it comes to imagining how this would translate as a film, the ideal way would surely have been something akin to C.S.A: The Confederate States of America (2004), which used a pseudo-documentary style and dramatised footage to create an alternate history of the USA if slavery had never ended. That would probably have been too non-commercial for audiences but you could look to other films like JFK (1991) or the recent J. Edgar (2011) that do fine jobs of dramatising historical theses.

What Seth Grahame-Smith’s book doesn’t seem to shout out is being an action movie. You could imagine plentiful horror scenes with Lincoln beheading vampires. On screen, what we end up with is the book having been turned into an action film where Timur Bekmambetov is determined to visually overwhelm us with absurdly over-hyped action scenes. Benjamin Walker does not merely hunt down and confront his nemesis but this happens in the midst of a horse stampede with the two combatants pursuing one another as they jump across the backs of horses and plunge down cliffs, even Marton Csokas picking up and throwing horses at Walker. There is an absurdly over-the-top climactic sequence that takes place with Benjamin Walker and others fighting off vampires aboard a train crossing a burning bridge that is in the midst of collapsing. Neither of these sequences have any equivalent in the book, yet become the highlights of the film.

In fact, you get the impression that Timur Bekmambetov regarded Seth Grahame-Smith’s book as an inconvenience that was in the way of the film he wanted to make. Numerous aspects of the book have been thrown out – the supporting character of Edgar Allan Poe, the death of Lincoln’s earlier fiancee Ann Rutledge, and most noticeably, no mention of John Wilkes Booth or depiction of Lincoln’s assassination. The film creates a villain in the form of Rufus Sewell’s head vampire, who has no equivalent in the book, in order to give a fake conflict to the story. The film even skips over the entire twenty-year period where Lincoln went from a shopkeeper, graduated and went into practice as a lawyer, entered the House of Representatives as a Congressman and was voted in as President. There are some namedrops of occasional things like the Emancipation Proclamation, the Civil War and the Battle of Gettysburg, but the film manages to get by with surprisingly little of touching base with the historical Lincoln.

I am not sure if that is due to the film being made by an outsider like Bekmambetov who may well have had no interest in US history, whether it was decided to dumb the film down for mass consumption or if Bekmambetov’s interest was only in creating an action film. What it does feel like is Total Recall (1990) when a mind-bending psychological science-fiction film story ended up being handed to a director (Paul Verhoeven) who was not suited to the material and rewrote everything as a bludgeoning action film. In doing so, one’s disappointment in Timur Bekmambetov becomes evident. He has revealed his hand as no more than a slick imitator of The Wachowskis. This was fascinatingly stylish the first few times but now it becomes something where it seems that the over-the-top action scenes are all that Bekmambetov can do even when he is handling a script that does not require them.

Benjamin Walker makes for a dull and stolid Lincoln. The contrast between his performance here and Daniel Day-Lewis’s extraordinary performance in the role in Steve Spielberg’s Lincoln (2012) several months later is about as far apart on the spectrum as it is possible to get. What also must be said is there is a very unconvincing makeup job on Walker when he becomes middle-aged (that for some reason makes him look like a younger Liam Neeson). Dominic Cooper makes more impression as the mysterious Sturgess, although this is very much the modern conception of a vampire than necessarily a character who would inhabit the period. Mary Elizabeth Winstead sparkles nicely as Mary who becomes Lincoln’s wife, although it is a nothing role that gives her very little to do.

At the same time as this, the low-budget company The Asylum made one of their mockbusters with Abraham Lincoln vs. Zombies (2012), which is surprisingly a far better film and gets what Seth Grahame-Smith was trying to do much more than Bekmambetov does. Abraham Lincoln, Vampire Hunter was parodied in 30 Nights of Paranormal Activity with the Devil Inside the Girl with the Dragon Tattoo (2013).