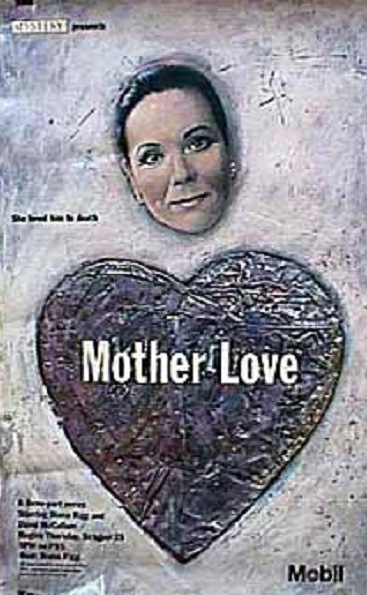 Kit Vesey, a London barrister, has proposed to Angela Turner, a receptionist at an art gallery. He is fearful about breaking this news to his fiercely controlling mother Helena but they do. Kit also insists that Angela not mention anything to Helena about them going to visit his father Alex who divorced Helena and remarried many years ago. Helena has blocked all mention of Alex from her life and even threatened to commit suicide when Kit once suggested going and living with him. Accepted by Helena, they settle into marriage and have two children, all the while maintaining a secret relationship with Alex and his new family. However, when Helena sees an arts program about Alex’s wife Ruth, a renowned photographer, she is shattered to see her driver George attending a family function. She conspires to lock Ruth in her darkroom with the ventilators blocked, suffocating her and contrives evidence to convict George. As Kit is bedridden with a stroke, Helena comes to tend him but starts to uncover other evidence about how Angela has been visiting Alex. She then plots further murders.

Mother Love was a BBC mini-series, originally shown in four one-hour segments. It garnered a great deal of attention from the arts establishment, winning the BAFTA for Best Drama Series or Serial and a Best Actress Award for Diana Rigg. The respect it gained had it aired on Masterpiece Theater in the US and other similar arts plaudits.

You could easily imagine Mother Love as being one of the psycho-thrillers of the 1960s. In particular, it belongs to one of a spate of films that came after Robert Aldrich had created a stir with What Ever Happened to Baby Jane? (1962), which featured Bette Davis and Joan Crawford in their middle-age and going bonkers as they tormented one another. This created a fad of films featuring former glamour actresses of the 1940s past their prime and going mad. People like William Castle prolifically mined this genre for a number of years, while England’s Hammer Films made several of these with the Bette Davis starring The Nanny (1965) and The Anniversary (1968) and Tallulah Bankhead in The Fanatic/Die, Die, My Darling (1965). You could easily imagine Mother Love trimmed down as a Hammer psycho-thriller starring someone like Joan Crawford in the Diana Rigg role. It should also be noted that Mother Love came out not long after the huge cinematic success of Fatal Attraction (1987) and could well have been intended to offer up a vengeful woman story in a not dissimilar vein.

I was disappointed in Mother Love. I approached it as a psycho-thriller, whereas it seems that the BBC and Andrew Davies approached it as another arts program. To me, this is something that kills the story off. It causes a story that could easily have worked in a 90-minute frame to be dragged out to 220 minutes. It cannot help but seem long-winded and to take far longer to get about the business of being a psycho-thriller than you feel it should have – it is 90 minutes, the runtime of the average film, before we get to the first victim being killed, for instance. Pieces seems clumsily plotted – like the tv tour through the bomb shelter and prominent focus on the air vents that seem intended to highlight Isla Blair’s fate with a big red underline.

Diana Rigg had become one of the major sex symbols of the 1960s after appearing as Emma Peel in tv’s The Avengers (1962-9). Oddly though, after that point, Rigg turned away from capitalising on that success. She had a number of film appearances that could be counted on one at hand – although these do at least include the James Bond film On Her Majesty’s Secret Service (1969) and playing opposite Vincent Price in the horror comedy Theatre of Blood (1973) – and barely more in the way of tv appearances, with almost all of these being in British arts programs. More recently, in her mid-seventies, she has started to reappear on hit shows like Doctor Who (2005– ) and Game of Thrones (2011-9). Most of the time in between she has spent as a stage actress where she has racked up a phenomenal number of credits (she had just received an MBE for her work the year before appearing here).

Thus, when she appeared in Mother Love, Rigg had been largely unseen, apart from small appearances, since coming to fame in the mid-1960s. As a result, there must have been some undeniable shock value at seeing the lithe, flirtatious and sexy Mrs Peel turned into a venomous and embittered middle-aged woman with murder on her mind. The problem though, and I think that this is part of the arts crowd that Mother Love was pitched to, is that Rigg gives a very arch reading. She may well have won an award for the role but after a time her posh accent and mannered affectations begin to grate on the nerves. Certainly, everybody else seems well cast from the impossibly handsome James Wilby, the then unknown Fiona Gillies, and genre veteran David McCallum who slips into a backseat role with casual ease.