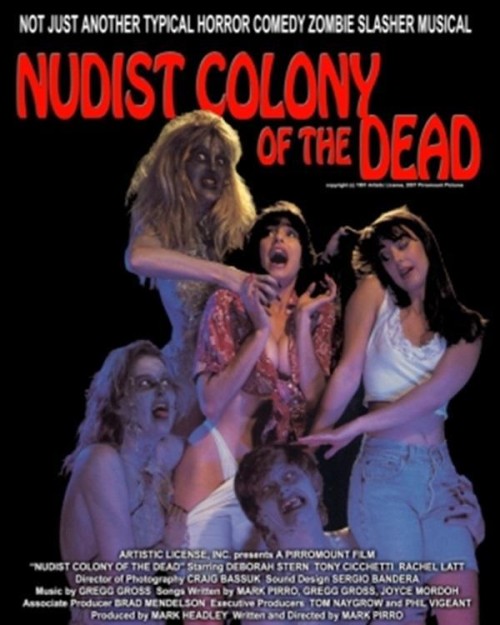 A church protest group go to court and get an order from the judge to shut down the Sunny Buttocks Nudist Camp, who also directs that the land be turned over for public use. Instead of caving in, the members of the nudist camp decide to drink poison and commit group suicide. Before they die, the aging Mrs Druple curses their accusers and hopes that they can return to take vengeance against any church group that makes use of the land. Several years later, Reverend Ritz sends a group of young people off to the church Bible Camp Cutyourgutsout now located on the site of the nudist colony, despite warnings that all who have gone there have been killed. As the group arrive, the dead nudists rise from the ground and begin killing the interlopers.

Mark Pirro has almost exclusively made a career as director/writer of low-budget independently-made spoof horror films with titles that include A Polish Vampire in Burbank (1985), Deathrow Gameshow (1987), Curse of the Queerwolf (1988), Rectuma (2004) and The God Complex (2009), as well as the screenplay for My Mom’s a Werewolf (1988). Pirro makes horror comedies that are frequently steeped in genre in-referencing – Nudist Colony of the Dead, for instance, contains an obligatory cameo from fan favourite Forrest J. Ackerman, the editor of Famous Monsters of Filmland, who appeared in several other of Pirro’s films. Pirro’s films are extremely low budget and almost all shot in 16mm.

Nudist Colony of the Dead is interesting in that it appears to be the first example of the wacky zombie conceptual collusion. Zombie films of the 2000s and beyond have had fun coming up with increasingly more outlandish titles or title collusions with the likes of Zombie Beach Party (2003), Dorm of the Dead (2006), Poultrygeist: Night of the Chicken Dead (2006), Zombie Cheerleader Camp (2007), Zombie Strippers! (2008), Attack of the Vegan Zombies! (2009), Zombies of Mass Destruction (2009), Romeo and Juliet vs the Living Dead (2009), Stag Night of the Dead (2009), Big Tits Zombie (2010), Santa Claus vs. the Zombies (2010), Bong of the Dead (2011), Cockneys vs Zombies (2012), Pro Wrestlers vs Zombies (2014), Zombeavers (2014), MILFs vs Zombies (2015), Scouts Guide to the Zombie Apocalypse (2015), Attack of the Lederhosen Zombies (2016) and Pride and Prejudice and Zombies (2016), among others. Nudist Colony of the Dead came out more than a decade before the trend began and may well be the first such title of its kind. There were certainly other gonzo horror titles around this period but not among the zombie film.

That said, Nudist Colony of the Dead is different to what we expect of a gonzo zombie film today. The big disappointment is that Mark Pirro seems for the better part more interested in digging a knife in and poking fun at the Christians and Bible camp attendees. The zombies only really appear in the last third of the film and never seem much of a threat, although there is one appealingly wacky image of them all singing and dancing their way back to their graves. The other disappointment is that despite the title, there is very little in the way of nudists and undressed bodies throughout the film.

Nudist Colony of the Dead is amateurishly made on all counts. In particular, the sound quality is often poor. Other than Forrest J. Ackerman’s single scene appearance as the judge, all of the actors are unknowns – and none particularly good into the bargain. As horror comedy, Mark Pirro’s direction is schoolboyish – this is a film that thinks it hilarious to name characters Fanny Wipe, a Judge Rhinehole and a Ranger Bygbutts or a Chinese-Latino character named Juan Tu. There are gags about an old lady (Rachel Latt) at the nudist camp whose tits have drooped to her knees and keeps whacking people in the face with them every time she turns around. On the plus side, the film is also a musical and the lyrics of the songs contain some occasionally amusing rhymes. A particular standout is one of the numbers where the group all sit around in the bus and sing about not being afraid to die.

Scenes from the film here