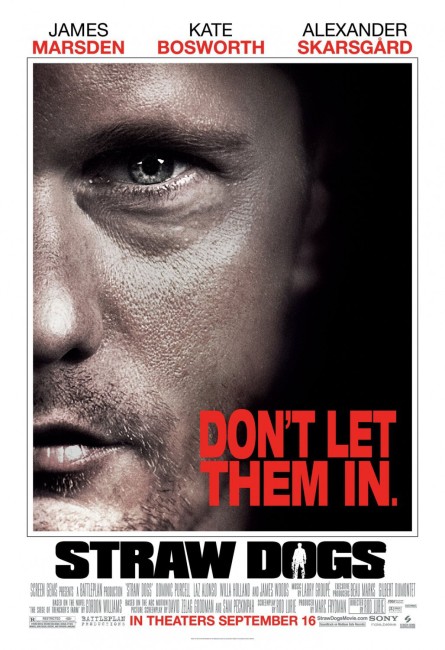 Successful Hollywood screenwriter David Sumner and his wife Amy, a rising actress, travel back to her hometown in Blackwater, Mississippi. David has brought up her old family farm and plans to have it renovated while he works on a screenplay about the Siege of Stalingrad. He hires a crew of locals to restore the shed. The foreman is Amy’s old boyfriend Charlie Venner. The redneck workmen prove uncouth and intimidating, with Amy disliking their constant lustful gazes. As David’s liberal, city attitudes put him at odds with the workmen, they take a taunting revenge, hanging the cat in the closet and then luring David away on a hunting trip while they return to the house and rape Amy. David then grants refuge to Jeremy Niles, an intellectually handicapped local who is accused of molesting an underage girl. Charlie and the group come, battering and shooting at the house in a determination to break inside to get Jeremy. David is forced to resort to violent means to defend himself.

There is no remake among these however that seems to have gotten the ire of classic film fans more than the thought of Straw Dogs 2011. You would have to look some way back to at least Gus Van Sant’s remake of Psycho (1998), or perhaps at least the degree of ridicule that The Wicker Man was greeted with to find a similar sense of outrage from film fans at somebody daring to meddle with a classic.

Sam Peckinpah’s Straw Dogs (1971) was a classic that started off what this author has termed the 1970s Backwoods Brutality cycle. The basics that Straw Dogs laid down were quickly copied by numerous other films including the likes of Deliverance (1972), The Last House on the Left (1972), The Texas Chain Saw Massacre (1974), Death Weekend/The House By the Lake (1976), Fight For Your Life (1977), The Hills Have Eyes (1977) and Day of the Woman/I Spit On Your Grave (1978), among others. In these films, middle-class life suddenly found itself at siege from the elements of chaos and barbarism beyond their door that seemed determined to tear their lives apart and destroy their illusions of bourgeois placidity. Frequently, as in Straw Dogs, we saw the theme of the middle-classes being reduced to having to defend themselves in hand to hand combat. Which is much the way the real world middle-classes were probably feeling after the student revolution and youth movement of the 1960s/early 1970s.

Straw Dogs 1971, being the first of these films, was different in some ways. Most of the other films that followed, being American-made, located their conflict in terms of the geographic US – the notable classic here being Deliverance, which saw the forces of untamed chaos as being brutish hillbillies – whereas Straw Dogs took place in Cornwall, England, a country that never seemed to see the need to find uncivilised chaos in its midst in the same way that the US films did.

Here Straw Dogs is updated to the 00s, as many of the aforementioned Backwoods Brutality films have been – always without the savagery and bite that the originals held. Now the films are just brand names that are being resurrected without any sense of their original cultural context. Moreover, they have been made well after the genre they created has become so familiar it has faded into tired cliche, leaving little new territory to push than to up the savagery and place more production finish on the film.

Some changes have been forced on the original, although for the most part the remake is surprisingly faithful to everything that happened in the first film. The most noticeable of these changes is what you might call the US-washing of the film – translating a story to the US on the assumption that American filmgoing audiences either appear to be unaware that the rest of the world exists or may suddenly get up and run out of theatres at he thought of dealing with foreign characters. Thus the events have been relocated from Cornwall, England to the Deep South, while Dustin Hoffman’s visiting American mathematics genius is now replaced by James Marsden’s Hollywood screenwriter.

Aside from the pandering to Americano-centric interests, the idea of the antagonists of the story now made into Southern rednecks makes a good deal of sense. After all, it is Rod Lurie translating the original into the geographic battleground terms where all of the Backwoods Brutality films that came after Straw Dogs saw the conflict as taking place. Certainly, the film’s treatment of rednecks and people of the Deep South becomes so over-the-top it could almost be called a geographic (as opposed to ethnic) racism.

The other thing that Rod Lurie does is water the violence and sexual subtext down to something that could easily be a PG-13 (even though the finished film did get an R). About the point where we see Kate Bosworth, whipping off her top to taunt the workmen for looking at her with lust – a much more provocative act here than in the original where they simply peeped in on her dressing – and what they see remains discreetly unseen, the original’s savagery starts to feel that it is heading in a tediously safe direction. By the time we get to the rape scene during which Kate Bosworth keeps her bra on and body artfully shielded, the raw savagery of the story starts to resemble a tameness.

If there was any film that cried out for an R-rated treatment, Straw Dogs is surely it. Both the remakes of The Texas Chainsaw Massacre and The Hills Have Eyes never held anything back; it is hard to see why it was so difficult for Straw Dogs to do so as well. At least the sexual undercurrent is updated to the modern era – when James Marsden suggests to Kate Bosworth that maybe he dress a little more conservatively, the script smartly takes the opportunity for rebuke him for suggesting that she is asking for it the way she dresses. One scene that does work well is the one where James Marsden returns home from the hunt, angry and frustrated at being abandoned, sounding off in front of Kate Bosworth in a way that becomes accusatory, while completely unnoticing of her sitting in a shell-shocked state in bed following the rape.

Straw Dogs passes slightly better than I thought it would but is nothing more than strictly average – the Danish-made Deliver Us From Evil (2009) did a far smarter job of uncreditedly borrowing the basics of Straw Dogs than this does. Rod Lurie, a director who has made films that stretch for profundity but remain solidly middle-of-the-road with the likes of the nuclear war film Deterrence (1999), The Contender (2000) and The Last Castle (2001), adheres faithfully to the original but everything has become so much part of a formula that nothing has any freshness.

Lurie foreshadows everything badly – Jeremy and his attraction to Janice, her father’s blind rage at the very sight of him. Indeed, Lurie’s crosscuts are also astonishingly crude – between the hood ornament on James Marsden’s Jag and the antlers mounted on the front of the rednecks’ pickup truck; and most absurdly between James Marsden shooting a deer in the woods and Alexander Skarsgaard reaching his orgasm inside Kate Bosworth.

The climax of the film works passably well, although the surprise here is that this version abandons the original’s theme of a man being pushed so far that he has to abandon civilised nicety and resort to violence even though James Marsden is portrayed as even more backboneless and lily-livered than Dustin Hoffman ever played the part. No such contrast exists here – James Marsden almost appears to have been waiting for the occasion to happen and when it does he quickly starts to make preparations of defences, even whipping off a list of instructions to Kate Bosworth about what to do.