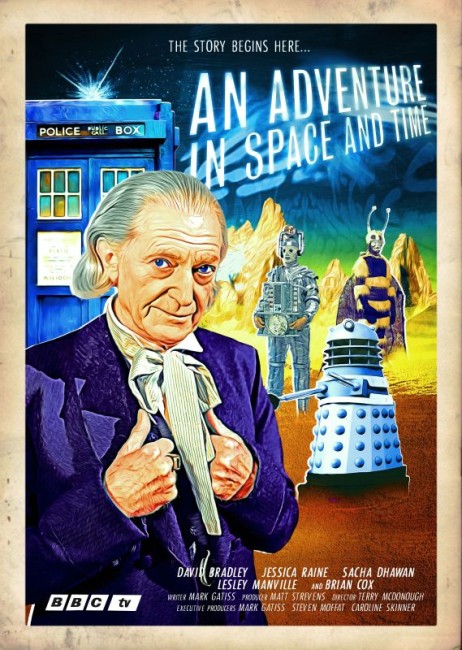 In 1963, the BBC’s head of drama Sydney Newman decides to create a science-fiction show to fill a half-hour slot. He comes up with an idea about a cantankerous grandfather and his companions as they travel through time and space and calls this ‘Doctor Who’. He chooses as his producer Verity Lambert, previously a production assistant, which causes some ripples because she is the first woman to be made a producer at the BBC. Verity and director Waris Hussein cast William Hartnell as The Doctor who takes the part because he is sick of being cast as military types. Verity perseveres through production difficulties to get the show on the air. With her head on the block, she pushes for the show to go ahead and the second story ‘The Daleks’ proves a big ratings success. The show becomes an audience favourite and William Hartnell much loved with children. However, as Hartnell is diagnosed with arteriosclerosis, this leaves him with increasing difficult in remembering lines and the show’s punishing production schedule begins to exert a toll.

An Adventure in Space and Time was a tv movie special made for the fiftieth anniversary of tv’s Doctor Who (1963-89, 2005– ). Doctor Who is the longest running science-fiction tv series in the world. Originally conceived along the lines of a series that dramatised history for children, this was soon abandoned and the science-fiction elements took over. The period that the film covers – the show’s first four seasons from 1963 to 1966, the tenure of the First Doctor – is when Dalekmania took over England and the series created a number of memorable monsters. The effects and production values were always primitive but it was the colourfulness of the elements, the unique monsters and the sense of humour that came in in later years that made the show a fan favourite.

The original series was cancelled in 1989 due to BBC in-politics, however was revived in slightly different format in 2005 with top quality effects and a much snappier, at times even daring, degree of humour and character interaction, which made it an enormous success all over the world. The other aspect of the show’s enduring appeal was, as shown here, when William Hartnell became too ill to continue the role, the invention of a dramatic sleight of hand known as regeneration that allowed The Doctor to be recast with another actor. Fourteen actors have taken up the part in the main continuity.

The fiftieth anniversary was celebrated by the 90-minute special The Day of the Doctor (2013), which was simulcast around the world, even shown live in cinemas in 3D in some areas – attracting the largest single television broadcast numbers in history to that point, while the one-day only cinematic broadcast managed to come in second at the box-office only to the premiere of The Hunger Games: Catching Fire (2013). The show had celebrated each of its prior anniversaries with episodes that brought together Doctor’s past and present – the tenth anniversary special The Three Doctors (1973) bringing together Jon Pertwee, Patrick Troughton and an infirm William Hartnell seen only on a tv monitor; and The Five Doctors (1983), which brought together Peter Davison, Jon Pertwee, Patrick Troughton, as well as archive footage of Tom Baker, who declined to return, and with the late William Hartnell being replaced by Richard Hurndall.

The Day of the Doctor didn’t quite end up being The Eleven Doctors as one expected. It did bring together the then two most recent Doctors, Matt Smith and David Tennant, various companions and creatures past and present and a cameo from a cryptic Tom Baker, not to mention tied up some big aspects of back continuity (as well as added just as many more mysteries with the addition of John Hurt as a heretofore unknown Doctor whose significance fans will probably be debating for the next fifty years). Although not quite having the same high profile as The Day of the Doctor but still being broadcast on the day was An Adventure in Space and Time, a docu-drama that goes back and tells the story of the origin of the show.

An Adventure in Space and Time is written by Mark Gatiss. Gatiss is a longtime childhood fan of Doctor Who and wrote and appeared in a number of the unofficial video specials that were made featuring former Doctor Who actors – The Zero Imperative (1994), P.R.O.B.E.: The Devil of Winterborne (1995), P.R.O.B.E.: Ghosts of Winterborne (1996) and Unnatural Selection (1996). Gatiss also wrote four novels in the Doctor Who New Adventures series of books, as well two audio plays, followed by nine episodes of the 2005 revived tv series. Gatiss originally came to fame as one of the performers/writers in the comedy act The League of Gentlemen, which was later spun out into a cult tv series The League of Gentlemen (1999-2002) and appeared in/co-wrote the film spinoff The League of Gentlemen’s Apocalypse (2005). Following the success of The League of Gentlemen, Gatiss began to take on other tv writing work, including episodes of the revived Randall and Hopkirk (Deceased) (2000-1), the haunted house tv series Crooked House (2008), writing/appearing in a BBC version of H.G. Wells’ The First Men in the Moon (2010), writing/narrating the documentary series A History of Horror with Mark Gatiss (2010) and wrote/directed the short tv movie ghost stories The Tracate Middoth (2013), The Dead Room (2018) and Martin’s Short (2019). His most notable work of recent was as co-creator of the modernised Sherlock (2010– ) tv series starring Benedict Cumberbatch in which he also plays Holmes’ brother Mycroft, and co-creating the BBC mini-series Dracula (2020) in which he plays the role of Renfield.

Expectedly, An Adventure in Space and Time is filled with numerous pieces of fanservice. Gatiss has determined to recreate iconic moments – we get acted out scenes of the companions discovering the interior of the Tardis for the first time from An Unearthly Child (1963), as well as a reconstruction of the lost unaired original pilot; the first appearance of The Daleks in The Daleks (1963); The Zarbi from The Web Planet (1965); The Daleks crossing in front of the House of Parliament and The Doctor’s moving goodbye to Susan from The Dalek Invasion of Earth (1964); and a visit to the set of The Tenth Planet (1966).

One of the most obscure pieces of trivia is the very opening shot where a sign announces that we are on Barnes Common and then pulls back to show a familiar Tardis but amusingly reverses expectation to show it is only a regular police box as we see a bobby exiting. (Barnes Common is an incredibly obscure piece of trivia that comes from Doctor Who and the Daleks (1964), the novelisation of The Daleks by David Whitaker, which tells an alternate origin story of The Doctor, Ian, Barbara and Susan where Ian encounters the Tardis and Doctor and companions after an accident in the fog on Barnes Common and is whisked away. In other words, the opening scene with the police box in the fog on the common and David Bradley sitting in the car is the bringing to life of an entire scene from one of the novelisations).

An Adventure in Space and Time is a show that comes very much steeped in the series’ mythopoeia. There are cameos from actors that played original Hartnell era companions such as William Russell, Carole Ann Ford, Jean Marsh and Anneke Willis. We see pieces like the creation of the famous title sequence and the Dalek voice, learn how the Tardis dematerialisation effect was achieved by slowing down the audio recording of a set of house keys being scraped along a radiator, and especially amusingly how the Tardis interior was created after Verity Lambert sat in front of the designer and demanding he finish it, which he improvised on the spot by throwing together a thimble, a compass and several sheets of cardboard with perforated holes.

Gatiss has also made a point of including recreations from many of the lost episodes such as Marco Polo (1964), The Reign of Terror (1964) and the final episode of The Tenth Planet. We get to see the rough and tumble shoddiness of the way the production first came together. While some of the behind-the-scenes personnel have been compacted into one, the show takes its time to make all of the companions look like they should (the exception being Gatiss’s League of Gentlemen colleague Reece Shearsmith who looks nowhere like Patrick Troughton in his one scene). There is a very lovely touch at the end where David Bradley’s Hartnell gets a momentary glimpse of the current Doctor Matt Smith at the Tardis console who smiles at him as though to acknowledge and tribute the legacy he began.

In his telling of the story, Gatiss places sympathy with the outsiders – Verity Lambert, the youngest producer at the BBC and the first female one and her struggles to be taken seriously, and Indian-born director Waris Hussein who was a racial minority in the organisation at the time. One of the most contentious figures that the show has to deal with is that of William Hartnell himself. Hartnell is often a figure of mystery in Doctor Who fandom. Many of the actors and production personnel from the era have been interviewed about him, while his granddaughter Judith Carney published a biography Who’s There? The Life and Career of William Hartnell (1996), but often say very different things. He was reported to be autocratic, highly temperamental and likely to erupt in tantrums, and generally difficult to work with, experienced increasing trouble remembering line due to his illness, while some have made accusations that he was anti-Semitic and homophobic. Others (in particular Verity Lambert) have defended him and called him a consummate professional. An Adventure in Space and Time has the difficult job of making such a divided figure likeable.

The inspired piece of casting is David Bradley in the role. An actor since the 1970s, Bradley is now in seventies and mostly known for roles as either frail or nasty and cantankerous old men in the Harry Potter series, tv’s Game of Thrones (2011-9) and films like Harry Brown (2009). For a time, we start off with Bradley seeming to play his 145th cranky old man role. However, the show then proceeds to surprise one and Bradley gives an incredibly moving performance – indeed, it is probably the single best performance one has seen him in. Where it would have been easy to create a caricature, he gives a Hartnell full of nuance – autocratic, proud, frail and infirm, burning out, heartbroken at losing the role. Above all, it shows his love for and dedication to the show. It is a portrait that strides the complexities that Hartnell embodies but is ultimately a tender and moving tribute to his greatness as an actor and the role he brought to life, and crucially never in any way denigrates his legacy. Bradley later went on to play the role of First Doctor in the Twelfth Doctor finale Twice Upon a Time (2017).

(Winner in this site’s Top 10 Films of 2013 list. Winner for Best Actor (David Bradley), Nominee for Best Adapted Screenplay at this site’s Best of 2013 Awards).